Interest rates of most lenders remain below 7 percent

The Reserve Bank of India (RBI) on June 4 kept key policy rates unchanged, but signalled an accommodative stance, which means that your home loan rates will remain lower in the coming months. Top 15 cheapest home loan deals offered by banks and housing finance companies (HFCs) range between 6.65-6.9 percent currently, as per data from Bankbazaar.com.

Kotak Mahindra Bank continues to offer the lowest interest rate (6.65 percent) on a Rs 75-lakh loan with a 20-year tenure, but its deal is now matched by public sector bank Punjab & Sind.  This month, an HFC, Bajaj Finserv (6.75 percent), figures among the top-five banks offering the cheapest home loans. 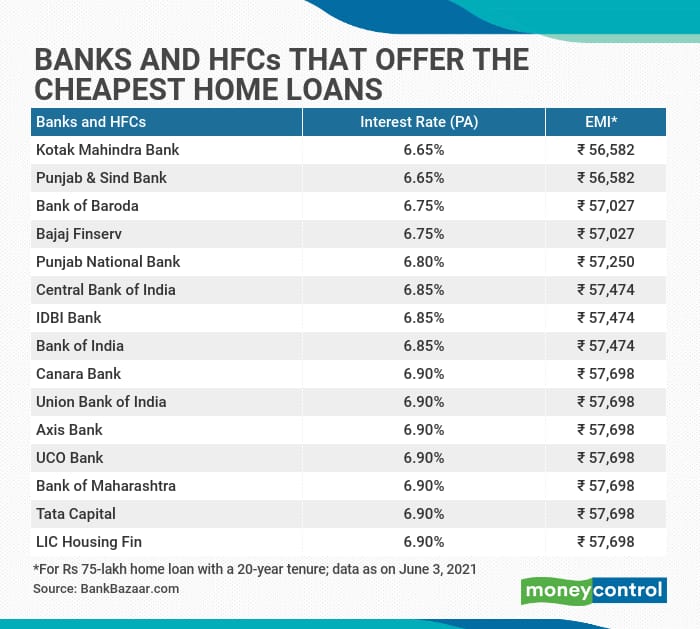 Interest rates on home loans for all listed (BSE) public and private banks, and housing finance companies (HFCs) as listed on National Housing Bank’s website which offers home loans of up to Rs 75 lakh are considered for data compilation. Banks and HFCs for which data is not available on their websites have not been considered. Data collected from respective bank/HFC's website as on June 3, 2021. Banks and HFCs in their respective sections are listed in ascending order on the basis of interest rates – that is, the lender offering lowest interest rate on home loan (Loan amount= Rs 75 Lac) is placed at top and highest at the bottom. Lowest rate offered by the bank/HFC on loans of Rs 75 lakh is considered in the table. EMI is calculated on the basis of interest rates mentioned in the table for Rs 75- lakh loan with tenure of 20 years (processing and other charges are assumed to be zero for EMI calculation).
Moneycontrol PF Team
TAGS: #bank #banking #Home Loan
first published: Jun 10, 2021 10:25 am