The bond ETF, to be rolled out by Edelweiss AMC, will have two variants – one scheme maturing after three years (2023) and another after 10 years (2030).

India’s first bond exchange-traded fund (ETF) is just a few weeks away from being rolled out. Called the Bharat Bond ETF, Edelweiss Asset Management will launch it soon, after nearly two years of deliberation with the government of India. The former finance minister Arun Jaitley had made announcements relating to bond ETFs in his Budget speech of 2018. Now, here is a low-down on the structure of the product and some pointers for investors to benefit from. 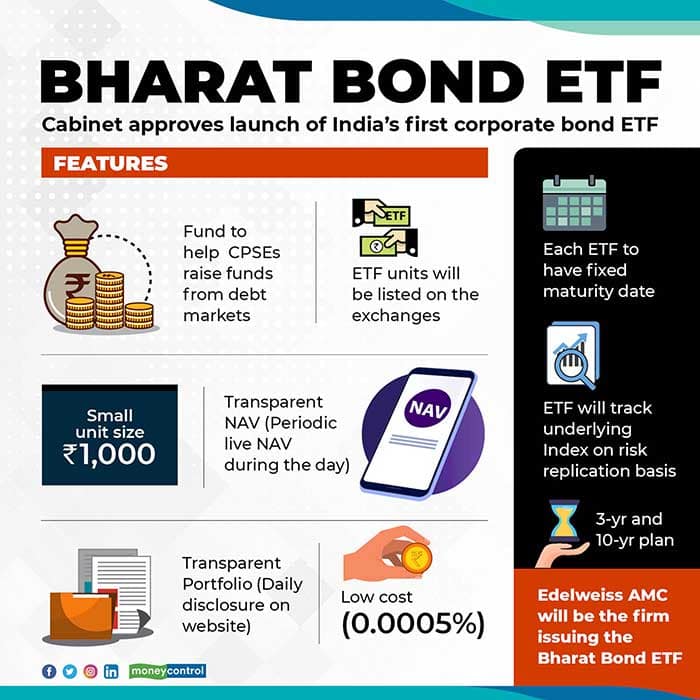 The structure of the debt ETF

The Bharat Bond ETF will have a definite maturity period, just like the way a closed-end mutual fund scheme has. Of course, the ETF units will be listed on the stock exchanges. In her first and exclusive chat with Moneycontrol, Radhika Gupta, the chief executive officer of Edelweiss AMC said that the bond ETF will have two variants – one scheme maturing after three years (2023) and another after 10 years (2030). Only the growth option would be available to investors. There would be no dividend option in these schemes. Bond ETFs such as these, which come with a defined maturity, are popularly known as ‘target maturity’ ETFs, abroad. And since these are schemes meant for specific tenures, Edelweiss will launch a tranche each in both these variants, once a year.

Globally, bond ETFs are broadly of two types. One is an ‘all-term bond ETF’ that invests in bonds across maturities and resembles a typical open-ended dynamic bond fund. It is an open-ended fund and you can enter and exit at any time.

After Edelweiss AMC won the mandate earlier this year, it was of the view that a scheme that comes with a definite maturity would better suit Indian investors. That way, Radhika explains, it’s easier to predict how much returns the scheme is likely to deliver.

“Indian investors, who typically invest in fixed-income securities, need to know, even if indicatively, as to how much returns they can make,” says Radhika. The only catch here is that you must stay invested till maturity.

In a way, the Bharat Bond ETF will loosely resemble a fixed maturity plan. Just like fund houses launch FMPs every year, Edelweiss Asset Management will roll out the two tranches of Bharat Bond ETFs every year. Meanwhile, the older tranches of Bharat Bond ETFs, the three-year and 10-year tranches, will continue to be available for those who wish to buy shorter duration schemes. The fund house would also ensure that the underlying companies continue to channelize their borrowing requirements – even for the reducing periods – through the Bharat Bond ETF. In simple words, the older tranches would also see re-issuances, even as new three-year and 10-year issuances come along. “This will ensure liquidity in older tranches also,” says Radhika.

“But if those investors buy its units midway through its tenure, then they would need to re-calculate the yields of the underlying instruments, if they wish to analyse how much returns they could potentially get. That is what happens when you enter a closed-end type of an investment, midway,” says Joydeep Sen, founder, wiseinvestor.in.

The ETF will be listed on the stock exchanges. Large investors will also be able to buy and sell units with the fund house directly. The first series will hold AAA-rated securities only. Later tranches could hold securities rated between AAA and AA+. There will be two baskets of securities on which the fund will be based upon. The three-year variant will have 13 companies, with REC, National Bank for Agriculture & Rural Development and PFC as its top three components. The 10-year variant will have 12 companies with the National Highways Authority of India, Indian Railway Finance Corporation and REC as its top three constituents.

What are the returns likely to be?

Although the capital market regulator, Securities and Exchange Board of India (SEBI) does not allow mutual funds to guarantee returns, a scheme that comes with a defined maturity does give an indication. Bharat Bond ETF will invest in securities that are rated AA+ and higher, though Radhika says that bonds rated below ‘AAA’ aren’t that liquid. It will also invest in state-owned companies.

The  three-year Liquid India AAA PSU yield has been typically 30 to 140 basis points higher than the three-year government securities yield, over the past about five years, according to Bloomberg data. The 10-year Liquid India AAA PSU yield, according to Bloomberg data, has typically been 50 to 140 basis points higher than the 10-year government securities yield, over the same period. The yield of the three-year index has moved in the range of 6.8-8.9 per cent and that for the 10-year index moved between 7.1 per cent and 8.9 per cent. This could roughly be the pattern of the Bharat Bond ETF, depending on the interest rate cycle in which each tranche gets launched and also the underlying securities.

The question is: would investors be able to buy and sell effectively? Would there be enough liquidity in the market for the Bharat Bond ETF’s units? Radhika says that the fund house has appointed market makers to ensure that there are sufficient number of units available for those who wish to buy them, as well as for buying from those who wish to sell units.

Then again, all ETFs have market makers, but most ETFs have insufficient liquidity. The lack of a sizeable number of units at an appropriate price leads to an impact cost.

For instance, if you wish to sell 1,000 units at the prevailing market price, you may not find a buyer who would want to buy this entire lot. In such cases, you may be able to sell a few units at that price. For the remaining units thereafter, the price keeps fluctuating, depending on the order book on the stock exchange. Would Edelweiss AMC, then, incentivise the market makers, especially given the fact that the income it will make from the Bharat Bond ETF will almost be negligible? Radhika did not comment but said that the fund house “in whichever way possible, will ensure liquidity.”

Also, only those investors who wish to buy or sell units worth Rs 25 crore would be able to directly approach the fund house. For everyone else, there are market makers. This higher threshold for approaching the fund house, she adds, would also ensure the market makers have enough units circulating.

How will the debt ETF work?

A government ETF, such as the Central Public Sector Enterprises’ ETF and Bharat ETF, helps investors buy shares in multiple state-owned companies. Instead of selling its stakes in several companies at different points of time, the government offloads all of the divested stocks and sells it to an ETF. The ETF raises money from the public and pays back the government. Units of this ETF are then available in the market for investors to buy.

A debt ETF – much like a debt fund – does not give investors the ownership of companies, unlike an equity vehicle. Instead, it provides a chance to state-owned companies for borrowing funds from a large section of investors. Think of several companies issuing non-convertible debentures instead of equity shares, almost at the same time, to the ETF. The ETF collects the amount and lends it to the companies that require the funds for a fixed period of time. The companies pay back the ETF, which in turn gives the amount back to the investors.

Shyam Sekhar, Chief Ideator and Founder, iThought, says that the quality of companies that are part of the ETF basket would determine the ETF’s success. He says that there are lessons to be learnt here from recent events. “The government has to unambiguously say what it would do, in case any of these underlying companies fail to pay up. It should clearly lay bare the risk factors. For instance, if a state-owned bank fails, people assume they will get their money and deposits back and the government will pay back. But that doesn’t always happen,” he says adding that a good-quality basket is very important for the fund.

Joydeep says, “The USP (unique selling point) of the product is the concept. It imparts the benefit of FMPs (predictability of returns) and does away with the deficiency. Hopefully, market makers will ensure liquidity to the ETF units. It does away with the issue of fund manager performance (buy and hold strategy). It would be better to limit the investment universe to AAA-rated firms. What happened recently with two fund houses, when their FMPs matured but one issuer could not pay up, is a learning for us.”

Yes, you do. Since ETFs can only be brought on the stock exchanges, you need a demat account. However, to facilitate transactions for investors who do not have a demat account, Edelweiss AMC’s Radhika says that the fund house will launch a fund of funds (FOF) MF scheme. Such a scheme will collect money from investors the way normal funds do and will invest its entire proceeds in the ETF.

With an expense ratio of 0.0005 percent, the Bharat Bond ETF will be the cheapest MF and ETF scheme in India and probably the most inexpensive ETF globally. The FOF, though, might add a few basis points as its own expense.