While Hong Kong has barred Air India after its flight carried infected fliers, similar instances have been reported in Wuhan and Dubai

A woman has a temperature check at Hong Kong airport on April 23, 2004, as a precaution against the SARS virus. (Image: Reuters)

Neelima Mahajan and her family were prepared for it. They just landed at the Hong Kong International Airport in their Air India flight from Delhi, on October 8. As was the protocol, officials at the airport took swabs of Neelima, her husband and son to test for COVID-19. Now they had to wait for the results to come before they could head out of the airport.

The wait, they were warned on Facebook groups of people who had already gone through the experience, could be 12-hours long. "We were prepared to the T," says Neelima, who works at a global consultancy in Hong Kong.

The family promptly erected a tent at one corner of the waiting area. As her son got comfortable, Neelima took out cups of instant noodles that she had packed. On the Facebook group, many had said only cookies and crackers would be available at the airport. Hot water was for only those who were traveling with infants and young children. "We actually managed to sleep and get rest," she says.

Even as they waited, four fellow passengers were taken away by officials dressed in PPE suits. The four had probably tested positive. This is despite all passengers required to carry a negative-test report before boarding in India.

Neelima and her family's results finally came after 15 hours. They had tested negative. From here, they proceeded to 14 days of quarantine in a hotel, before finally heading home.

"We later came to know that four more from our flight had tested positive. There were even more in the flight from Delhi, that came after ours," says Neelima. "One could feel the difference in treatment at the airport if you are from India...It’s like they are separating the lepers," she said.

When Neelima finally opened the doors of her house in Hong Kong, it was nine months since the family had left for Delhi, where their parents live. In between there were countless futile attempts to book a ticket on Air India. She was even approached by touts who promised confirmed tickets "for a premium." 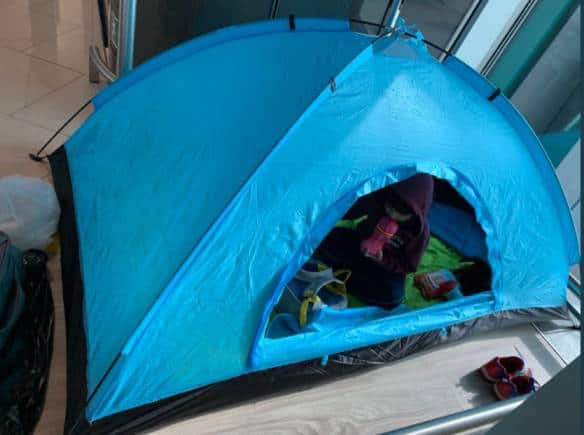 The family was lucky. In the coming days, many customers saw their flights getting cancelled. Just about 10 days after Neelima and her family landed in Hong Kong, the local authorities banned Air India from operating flights. Many more Indians had tested positive after landing, and the Hong Kong government put in place the ban, the third in two months. A fourth would follow, this time the suspension will last till November 10.

When the national airline was first banned, on August 17, it was also the first instance of Hong Kong penalising a carrier for flying COVID-19 positive passengers. A local report said that the officials had linked the high incidence of positive cases to "poor preflight testing for the virus."

Hong Kong is not the only one to question the testing efficacy. On November 2, 19 passengers of Air India's Delhi-Wuhan tested positive on arrival. In September, Dubai banned Air India Express for carrying a passenger diagnosed with COVID-19. The ban was taken back within a day.

In the same month, Malaysia had banned Indians from entering the country.

World over, airlines and IATA - the industry body - have been vocal about air travel being the safest option. In an October report, IATA said, "Since the start of 2020 there have been 44 cases of COVID-19 reported in which transmission is thought to have been associated with a flight journey (inclusive of confirmed, probable and potential cases). Over the same period some 1.2 billion passengers have traveled."

That is one case for every 27 million travelers.

It may be impossible to say if all the Air India passengers, who had tested positive on arrival, got infected while traveling. But the high incidence pops the question:

Is the problem specific to Air India?

Responding to the latest episode in Wuhan, officials reiterated that “All our passengers to Wuhan had boarded the flight from Delhi with Covid negative reports from certified labs. AI strictly adheres to all the safety protocol laid down by regulatory bodies and conforms to requirements at destination airports. There is no question of passengers boarding any of our flights without valid covid negative reports.”

As on September 10, the airline's 829 employees - including pilots and cabin crew - had tested positive, Civil Aviation Minister Hardeep Singh Puri had told the Parliament. Industry observers say Air India has reported the highest number of infections, probably because it has been the busiest of all airlines, beginning with the Vande Bharat Mission repatriation exercise.

The airline's unit Air India Express could be faulted for allowing a passenger, with a positive-test report, board from Jaipur on a Dubai-bound flight. But it also brought into question the system at airports.

"The incident was a weird case. If the person is carrying a COVID-19 positive certificate, how did he enter the airport? Thereafter the check-in process etc. The Dubai case is an example that the system is not fail-proof," says Amit Singh, an aviation safety expert.

Since then though, a similar instance hasn't been reported. In Hong Kong and Wuhan, all the passengers are said to have carried a negative-test report when they boarded in India.

"This indicates that either the accredited testing lab reports are under suspicion or the virus has been picked up during the travel," says Singh.

It may seem so as similar instances have been reported with Vistara too. The joint venture between Tata Sons and Singapore Airlines, was also banned by Hong Kong for carrying infected passengers.

Does it mean that the testing is faulty?

An RT-PCR test is considered to be the gold standard for Covid-19 testing - as it's said to be more accurate - because the test can detect even a minute fraction of virus. But even RT-PCR tests too can go wrong, say experts.

Also errors in collection of adequate swab samples, handling and processing of samples and quality of materials used in test kits can throw false negative and false positive results. This could be possible when the diagnostic lab isn't doing its job properly. It's rare, but even the timing of the testing could be a crucial factor. If a patient is tested immediately after being exposed to the virus, and has yet to show any symptoms, there is a possibility of him testing negative, but the result may turn positive in a day.

Are these factors behind the high incidence of Indian fliers testing positive on arrival in Hong Kong, despite carrying a negative certificate? It is hard to tell.

In September after the Air India Express incident, the Dubai Civil Aviation Authority recommended the airline to reject Covid-negative test reports of passengers from four Indian laboratories for poor accuracy of their test results.

Airlines and airports have woken up to the challenge.

After it was barred by Hong Kong, Vistara investigated the labs from where its customers had tested. "We have informed our travel partners of these labs and have asked them to be extra cautious," Vinod Kannan,  Chief Marketing Officer, Vistara, said during a media interaction on November 4.

The labs are accredited by Indian Council of Medical Research.

IndiGo recently became the second airline after SpiceJet to offer passengers testing facility along with their bookings. Passengers, both on domestic and international routes, can book a home appointment. Airports in Delhi, Mumbai and Hyderabad have set up testing facilities.

Internationally, airlines have begun providing rapid testing programmes. United Airlines, the US major, did so recently in Newark airport, for its London flights.

But even these measures can't assure a fool-proof system. And with the Indian government signing air travel bubble arrangements with more countries, the system itself will increasingly get tested in the coming days.

Prince Mathews Thomas heads the corporate bureau of Moneycontrol. He has been covering the business world for 16 years, having worked in The Hindu Business Line, Forbes India, Dow Jones Newswires, The Economic Times, Business Standard and The Week. A Chevening scholar, Prince has also authored The Consolidators, a book on second generation entrepreneurs.