Upcoming Webinar:Join us for 'The Future Techshot' on Sept 22, 10:30am to gain insights into role of tech in streamlining businesses. Register Now!
you are here: HomeNewsBusinessMoneycontrol Research

The first microfinance company to convert to a full-fledged universal bank is distinct from small finance banks (SFBs). Performance has been superior, both in terms of returns profile and asset quality, vis-a-vis listed SFBs. Its stands out even when compared to new private sector banks.

While micro finance is a relatively riskier asset segment, with inherently weak borrower profile, susceptible to socio-political issues and resulting unhealthy credit culture, few players in the industry boast of a track record as Bandhan Bank. This makes it a stock worth looking at, notwithstanding its premium valuation.

Quarter at glance
The bank continues to deliver another impressive quarterly performance. The superior performance is apparent in the net profit growth of 47 percent. Here are three balance sheet attributes that helped it deliver a strong performance:

Robust loan book growth: Advances grew at an accelerated pace of 52 percent year-on-year (YoY) in Q1 at Rs 32,590 crore. While Bandhan Bank is predominantly a micro finance lender, given that 86 percent of its book still comprises of micro banking loans, it is heartening to see the portfolio diversification. After transitioning into a bank, the management has diversified into multiple products: small enterprises loans (SME loans), two-wheeler (2W) loans, home and personal loans. It is utilising its bank status to scale up its retail/general banking business as non–micro banking assets increased 123 percent YoY, albeit on a lower base. While the microfinance-centric bank boasts of a 100 percent retail and consumption linked loans, we are particularly encouraged by the granularity of the loan book. Strong deposit base: In a short span of 3 years after receiving a banking licence, Bandhan Bank has built a formidable deposit franchisee. Growth in current and savings account deposits (CASA) at 84 percent outpaced the bank’s total deposits growth of 37 percent YoY as at June end. The bank’s ability to increasingly tap into stable and cheaper source of funding, as clearly evident in its CASA ratio of 35 percent, has reduced overall cost of funds. 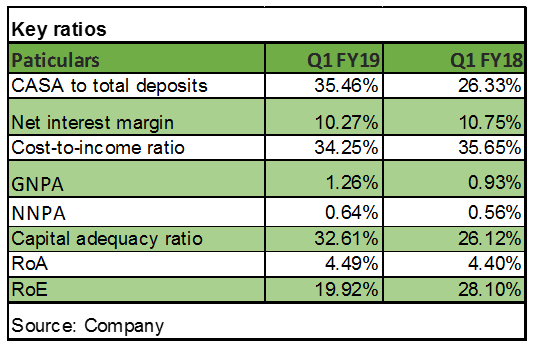 Impeccable asset quality: Bandhan Bank continues to maintain its pristine asset quality with gross and net non-performing assets at 1.26 percent and 0.6 percent, respectively, as at June end. Despite operating in an industry that has witnessed couple of big crises in the last decade (crisis in Andhra Pradesh in 2011 and demonetisation), it has consistently maintained healthy asset quality. Such strong asset quality performance is attributable to a long experience in the segment, in addition to the strong lending, monitoring and collection processes and systems. Going forward, the asset quality performance will be a key monitorable.

The balance sheet strength translates into superior profits and also provides assurance of the sustainability of earnings growth.

Bandhan Bank’s high yielding loan portfolio (as 86 percent of advances is micro lending) and low cost of funds resulted in high net interest margin (NIM). In Q1, though NIM declined marginally to 10.27 percent, it is still much higher than the industry average.

Its unique business model of focusing on rural and semi-urban markets generates new avenue for topline growth. For instance, priority sector lending certificates (PSLC) is a potent source of fee income for the bank as 95 percent of its advances qualify for priority sector lending (PSL). Strong other income growth of 73 percent YoY was underpinned by growth in fees from selling PSLC.

Along with higher NIM, low cost-to-income ratio at 34.25 percent is a key differentiator and profit driver. Bandhan Bank had low-cost operations as a microfinance entity (MFI). Even in its banking set up, it managed to keep costs under control. This despite the fact that the bank opened 937 general bank branches and added employees in the banking business. As the bank sweats its existing assets more efficiently, C/I ratio, which has started to trend down, should moderate further.

Bandhan Bank is a differentiated commercial bank with distinct growth drivers. The latest private bank in India is unique as it continues to focus on serving underbanked and underpenetrated markets. Around 71 percent of its distribution network is in rural and semi-urban areas. It is leveraging its strength as a micro lender to scale up its retail/general banking business.

We see immense growth potential, driven by rising penetration and increasing average loan size. The regional and low income group concentration are key risks. Given the relatively low credit penetration, these exposures also offers an opportunity of faster growth which the bank has captured well.

The stock trades at 5.3 times FY20e price-to-book (P/BV), following the strong price performance. The stock has rallied 31 percent since its strong listing in March and is up 59 percent compared to its issue price.

Given the strong return ratios with return on assets (RoA) at 4.5 percent and return on equity (RoE) at 20 percent, the steep valuation isn’t a surprise. RoE is currently depressed because of capital raising but is expected to bounceback again as the bank utilises capital for growth.

We see the premium valuation sustaining given its strong return profile with levers for improvement in place. With not much room for a re-rating in valuation, any price upside will be in tandem with earnings growth. Long term investors looking for a high quality business operating at the bottom of the pyramid should buy into this stock.