Yes Bank's market-cap has gained 1,747 percent between March 6 and March 18

Yes Bank's market-cap has gained 1,747 percent between March 6 and March 18. The up move was a result of Cabinet approving the Reserve Bank of India’s restructuring plan for the private lender.

The moratorium implemented by the central bank on March 5 was also removed on March 18, ahead of stipulated time.

The RBI, State Bank of India and the new CEO & MD Prashant Kumar’s assurances to depositors were enough to boost investor confidence. The up move in the stock comes at a time when the market has been crashing over the coronavirus outbreak.

On August 20, 2018, Yes Bank had touched its highest market cap at Rs 90,835 crore and on that day it was the 7th largest bank in India in terms of market cap. HDFC Bank, SBI and Kotak Mahindra Bank were the top three banks on that day. Since then it has been a rollercoaster ride for the bank's management, its stock, and its investors.

On September 25, 2018, Yes Bank's board sought another extension of Kapoor’s term, till April 2019, and said it will form a committee to find a successor.

Once the central bank denied an extension to Kapoor in October 2018, the bank has been in the limelight.

The Yes Bank’s stock price started to decline since its loan book divergences for FY19 came to light. From then onwards, the stock price has seen a major downtrend and volatility.
On March 6, 2020, the bank’s market cap went down as much as Rs 4,131 crore and this time it was not even in the top 20 banks of India.

And the stock bounced back once the government took control of the bank and came up with a rescue plan. A consortium of banks led by SBI invested money in Yes Bank. 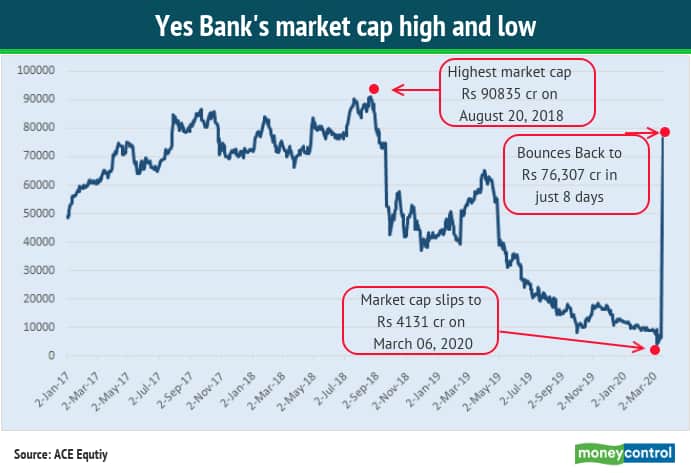