What the Federal Reserve will do today? Follow these numbers

Experts globally are agreed that the Fed will increase interest rates, and the focus is on the magnitude of the hike.

The world’s attention is on the US Federal Reserve’s two-day policy meeting that began on Tuesday. Experts, globally, agree that the US Fed will increase interest rates, and the focus is on the magnitude of the hike. In the run-up to the meeting, there has been a host of key economic data that can help gauge how hawkish the US central bank will be.

The recent higher-than-expected Consumer Price Index print has raised the prospect of a more aggressive monetary policy tightening. Markets now expect the terminal fed funds rate to be 4.25 percent and are even assigning a 20 percent chance of a 100 basis point hike, with a minimum 75 bps hike pencilled in.

The Fed hiked its policy rate by three-quarters of a percentage point at both its June and July meetings. Since March, it has lifted that rate from near zero to the current 2.25-2.50 percent target range.

The reaction across global indices has been swift. Since mid-August, the Nikkei has dropped 4.5 percent, the Nasdaq 12.5 percent while the S&P500 saw 10 percent of its value erode.

Even as inflation dominates, the Fed’s policy cornerstone is employment. The recent data of new jobless claims showed that the jobs market remains tight. US jobless claims dropped for the fifth straight week suggesting demand for workers remains healthy.

Retail sales were slightly better than expected, a relief on the demand front. University of Michigan consumer sentiment reading for September eased fears that the Fed may raise interest rates by a full percentage point. A breather on the inflation side was the drop in producer price index for the second straight month.

Here are the key charts that help investors anticipate the outcome of the US Fed meeting:

US CPI Inflation: The US reported its CPI inflation for August at 8.3 percent, slightly above estimates of 8.1 percent. From 8.6 percent in May, US inflation rose to 9.1 percent in June and later fell to 8.5 percent in July. 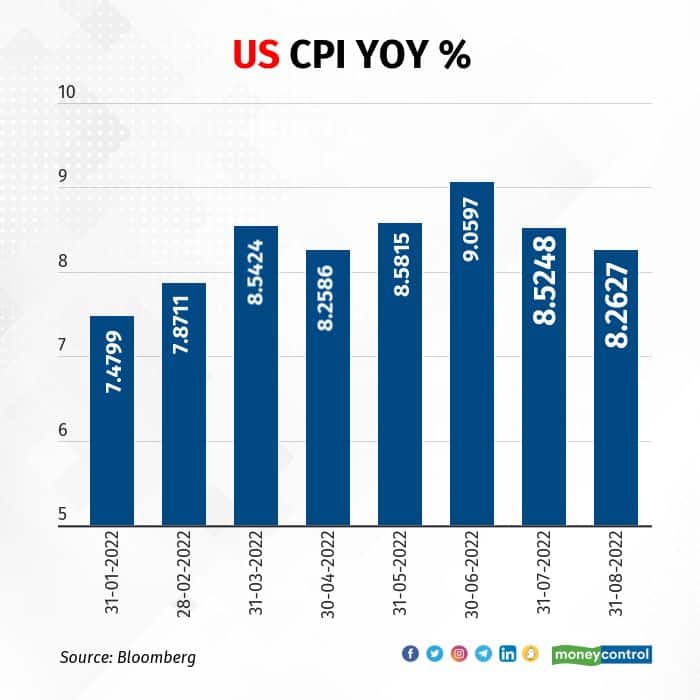 Producer price index: US producer prices, a gauge of prices received at the wholesale level, dropped for a second straight month in August. The PPI Index for final demand dropped 0.1 percent in August after falling 0.4 percent in July. Notably, the decline in goods prices was largely driven by a 12.7 percent fuel cost collapse. However, food prices were unchanged. In the 12 months through August, the PPI rose 8.7 percent. That was the weakest year-on-year reading since August 2021 and followed a 9.8 percent increase in July. 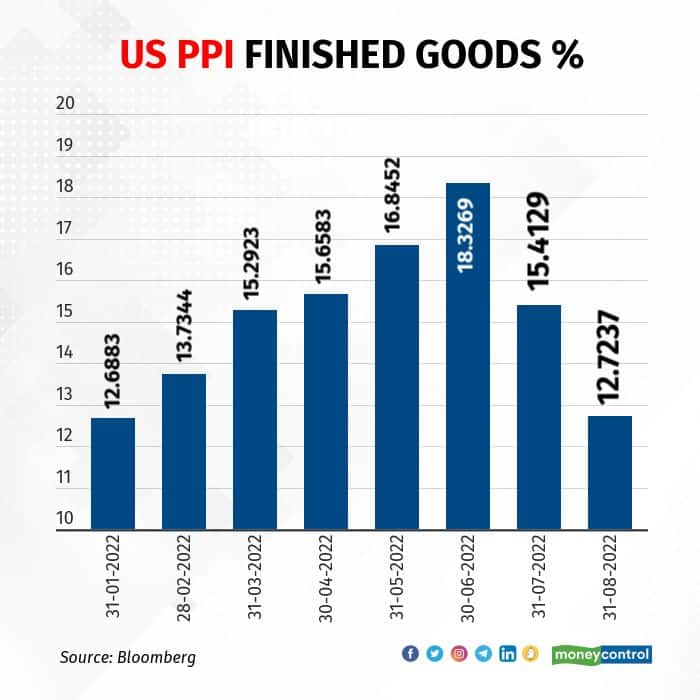 Jobless claims: Initial unemployment claims dropped by 5,000 to 213,000 in the week ended 10 September, according to US Labor Department data. The median estimate in a Bloomberg survey of economists called for 227,000 new applications. This was the fifth straight week when claims dropped, suggesting demand for workers remains healthy despite an uncertain economic outlook. Retail sales: August retail sales unexpectedly rose after declining a month earlier, as consumer demand for goods broadly held up but showed signs of moderating amid record inflation. The value of overall retail purchases increased 0.3 percent in August after a downwardly revised 0.4 percent drop in July. The median estimate in a Bloomberg survey of economists called for a 0.1 percent drop in retail sales. 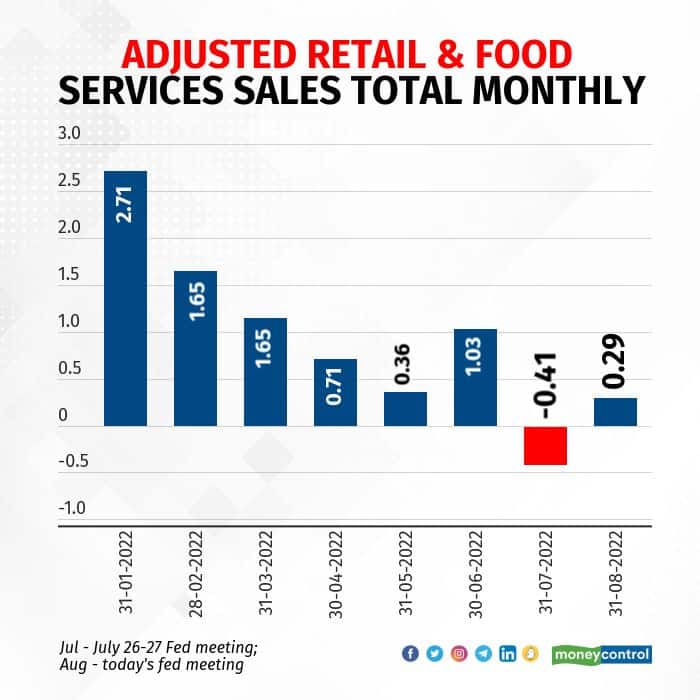 Michigan consumer sentiment survey: The University of Michigan's Consumer Sentiment index rose to 59.5 percent, a five-month high, from 58.2. The survey also showed 12-month inflation expectations at 4.6 percent, the lowest in a year, and at 2.8 percent within the next five years. New homes sales: Sales of new US homes fell in July for the sixth time this year to the slowest pace since early 2016. Purchases of new single-family homes declined 12.6 percent to a 511,000 annualised pace from a revised 585,000 in June. The Bloomberg poll estimated a 575,000 rate. Mortgage data: Mortgage rates in the US topped 6 percent for the first time in nearly 14 years. The average for a 30-year loan jumped to 6.02 percent, a rate last seen in November 2008, from 5.89 percent last week. With this data, analysts expect mortgage rates to continue to rise alongside hotter-than-expected inflation. This will continue to dampen demand and put downward pressure on home prices.