Trade Spotlight | What should you do with Vedanta, India Cements, Aegis Logistics on Thursday?

Vedanta was the biggest gainer in the futures & options segment, climbing 10 percent to Rs 305.60. It has seen formation of bullish candlestick pattern on the daily charts with robust volumes.

The market staged a smart recovery on September 14 despite nervousness among global peers, though the benchmark indices settled with four-tenth of a percent loss due to correction in IT stocks.

The BSE Sensex fell more than 200 points to 60,347, and the Nifty50 managed to close above the psychological 18,000 mark, down 66 points, while the Nifty Midcap 100 and Smallcap 100 indices ended with moderate losses.

Stocks that we have selected for trade spotlight and outperformed broader markets included Vedanta which was the biggest gainer in the futures and options segment, climbing 10 percent to Rs 305.60. It has seen formation of bullish candlestick pattern on the daily charts with robust volumes.

India Cements was the second largest gainer in the derivative segment, rising 9 percent to Rs 263 and formed big bullish candle on the daily charts with strong volumes. It has seen a breakout of long upward sloping resistance trend line adjoining May 16, 2017 and January 13, 2022, on the daily charts, while on the monthly charts too, there was a breakout of long down ward sloping resistance trend line adjoining December 3, 2007 and January 3, 2022.

Aegis Logistics has witnessed a very sharp correction of 56 percent between June 2021 and February 2022. Since then, the stock is consolidating at Rs 200-240 approximately (see chart) and it has made a solid base near Rs 250-260 levels along volume picking up which hints at further upside. 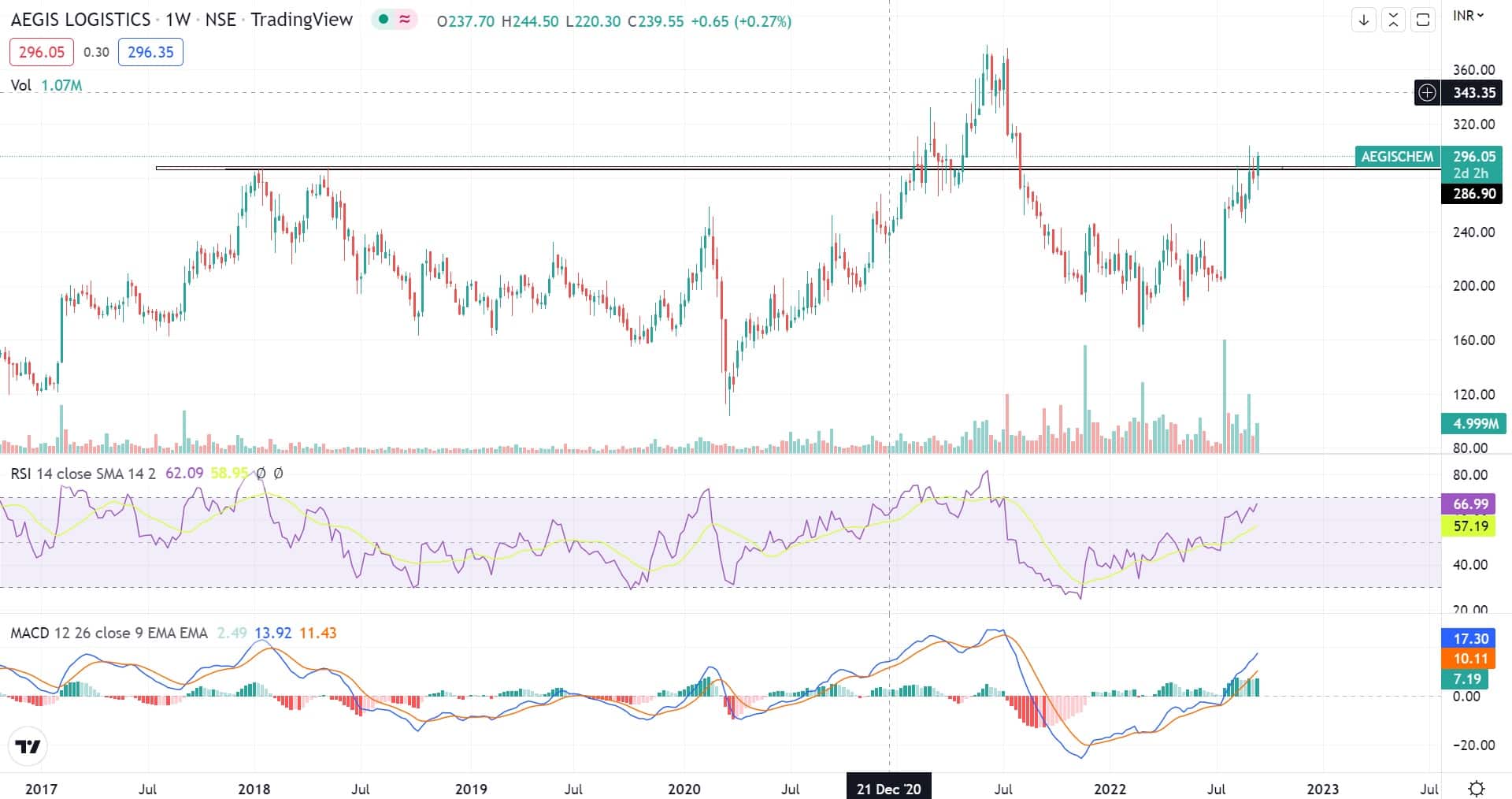 Since last one month or so the counter has been trading in a narrow range of Rs 250 - 275. In previous trading session, Vedanta gave clean range breakout with heavy volume indicating further upside momentum.

On the indicator front, daily MACD (moving average convergence and divergence) is giving bullish crossover above zero line along with daily RSI (relative strength index) is above 70 levels indicating bullish bias in said counter. Upside till Rs 355 with plausible support seen at Rs 280. On the monthly chart, the counter is near resistance levels of approximately Rs 275-280 which is also its historical top. Over the last three months, the stock has seen 86 percent appreciation. If already holding, then one should book some profits between Rs 270-280 levels if tested in few sessions.

Last but not the least, fresh buying in the counter is not advisable at the current market price, as volumes are high at higher price which is a sign of exhaustion. 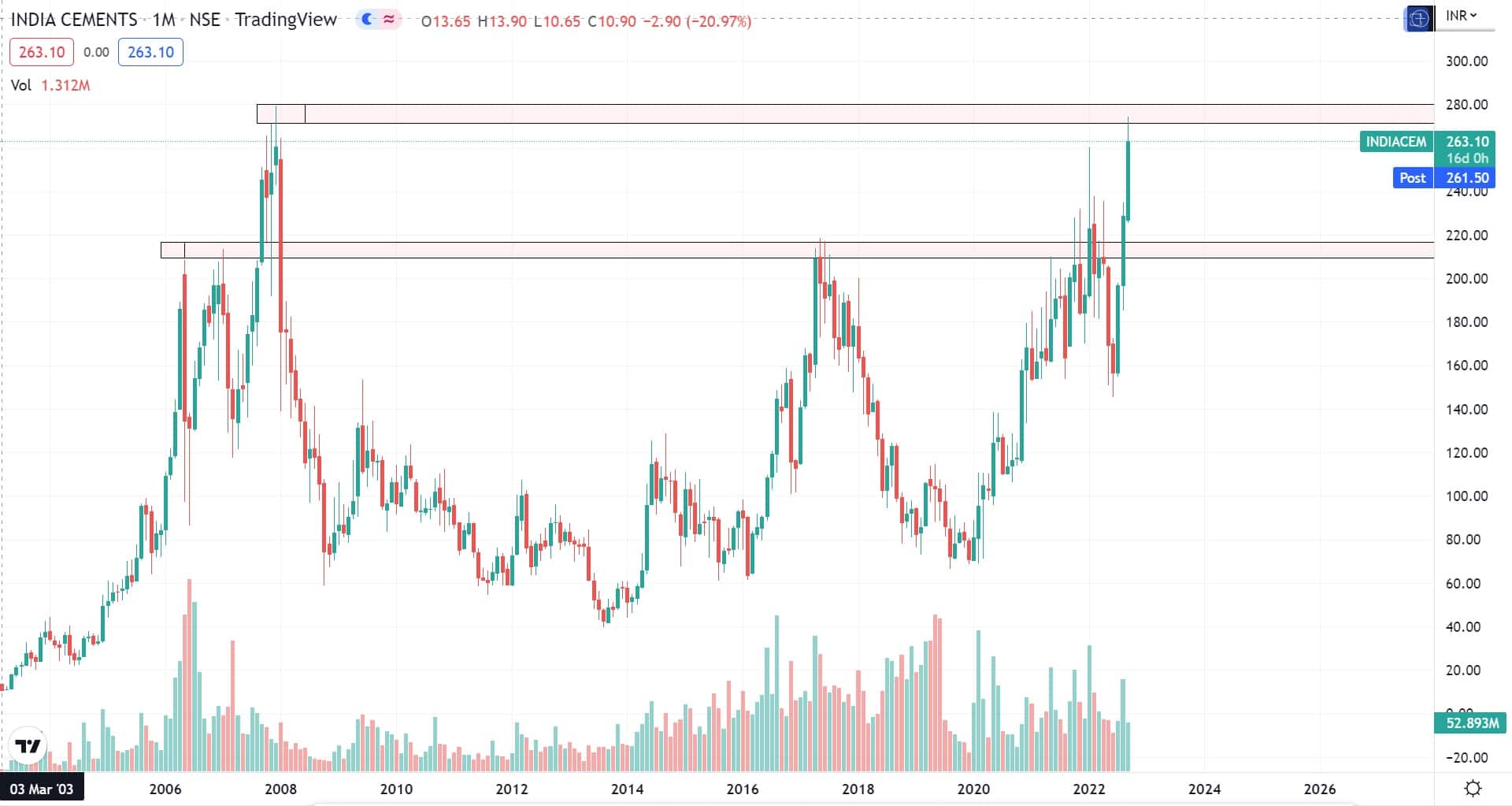 Disclaimer: The views and investment tips expressed by investment experts on Moneycontrol.com are their own and not those of the website or its management. Moneycontrol.com advises users to check with certified experts before taking any investment decisions.
Sunil Shankar Matkar
Tags: #Aegis Logistics #India Cements #Market Edge #Nifty #Sensex #Stocks Views #Technicals #Trade Spotlight #Vedanta
first published: Sep 15, 2022 06:29 am