Trade Spotlight | What should you do with CARE Ratings, KEC International, Birla Corporation on Thursday?

CARE Ratings which has seen a strong gap up opening and closed with 15.2 percent gains at Rs 478, the highest level since June 1, amid robust volumes. The stock has been respecting its support trendline for more than 15 months now, which is tad above Rs 400 levels, marked from March 31, 2021.

The market closed in the negative terrain as well as made lower high lower low formation on the Nifty50 for the third consecutive session on July 13, dented by weakness in European markets and selling in private banking and financial services, oil and gas and select IT stocks.

However, there was an outperformance in the broader space as the Nifty Midcap 100 index gained 0.16 percent and Smallcap 100 index rose 0.22 percent despite negative breadth. About 1,061 shares declined against 867 advancing shares on the NSE.

Stocks that were in focus and outperformed the broader markets included CARE Ratings which has seen a strong gap up opening and closed with 15.2 percent gains at Rs 478, the highest level since June 1, amid robust volumes. The stock has been respecting its support trendline for more than 15 months now, which is tad above Rs 400 levels, marked from March 31, 2021.

KEC International is the second stock selected for trade spotlight, which gained 9.6 percent to Rs 448.1, the highest level since February 25 this year and formed robust bullish candle on the daily charts with significantly above average volumes. In fact, the stock has made a strong breakout of resistance trendline that was marked since June 1 this year.

Birla Corporation rose 5.8 percent to Rs 950.9, the highest level since June 2 this year, forming a bullish candlestick pattern on the daily charts with above average volumes. The stock on July 5 made a break out at resistance trendline marked since January 17 this year and since then, has been trending higher despite intermittent volatility and minor correction.

Although the counter is looking lucrative but at the current juncture it is near its resistance zone of Rs 455-465 levels. Also volume is very high at extreme price levels which is a sign of exhaustion.

One can book some profits at current levels and other higher levels if achieved. Fresh buying as of now is not advised. 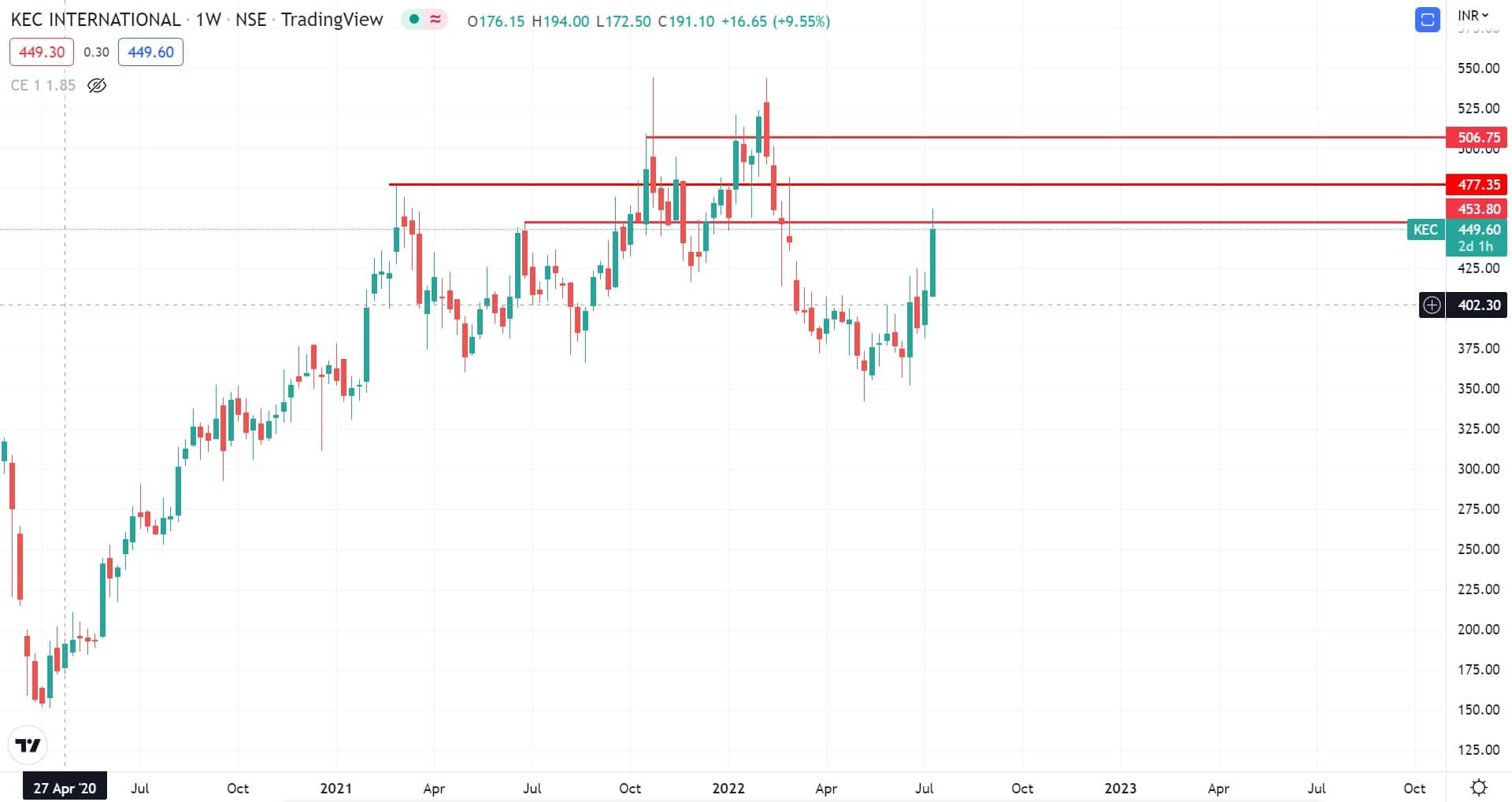 The counter has corrected almost 48 percent from its high of Rs 776 in July 2021. At current juncture, the stock has reversed from its historical support which is respected many times earlier. Moreover we have witnessed tweezer bottoms on weekly chart along with volume picking up which is a sign of early reversal in the counter. One can buy this at current levels with upside potential of Rs 600 and downside support seen at Rs 420. Birla Corporation has consolidated since last month in the range of Rs 825-890. Recently the stock has given a clean range breakout on daily chart along with volume picking up and awesome Oscillator is showing bullish divergence, which is an early sign of further up move.

Last but not the least, Birla Corporation has formed a bullish bat on the daily chart. The best part about this pattern is that it took 3.5 months to complete (more time taken to complete is more favourable).

One can buy in small quantities at current levels and another around Rs 900 levels with a target of Rs 1,100 with good support seen at Rs 850 levels. Disclaimer: The views and investment tips expressed by investment experts on Moneycontrol.com are their own and not those of the website or its management. Moneycontrol.com advises users to check with certified experts before taking any investment decisions.
Sunil Shankar Matkar
Tags: #Birla Corporation #Care Ratings #KEC International #Market Edge #Nifty #Sensex #Stocks Views #Technicals #Trade Spotlight
first published: Jul 14, 2022 06:27 am