Based on the open interest future percentage, here are the 66 stocks including Intellect Design Arena, Persistent Systems, Hindalco Industries, United Breweries, and Infosys, in which a short build-up was seen.

The selling pressure extended for a second consecutive session, pulling down the benchmark indices by more than six-tenth of a percent, while the pressure was more in broader space as the Nifty Midcap 100 index fell nearly 2 percent and Smallcap 100 index slipped 1.6 percent.

The BSE Sensex dropped nearly 400 points to 58,576, while the Nifty50 declined 145 points to 17,530 and formed small bearish candle which resembles Hammer kind of pattern formation on the daily charts.

"A reasonable negative candle was formed on the daily chart with minor lower shadow. Technically, this pattern indicates continuation of weakness in the market. After sliding below the initial support of 17,600 levels, Nifty is now placed at the next lower support of around 17,500-17,450 levels," said Nagaraj Shetti, Technical Research Analyst at HDFC Securities.

He further said though, Nifty placed at the support, still there is no indication of any convincing bottom reversal pattern at the lows and one may expect further weakness in the short term. "The market could possibly find support around 17,300 levels and is expected to bounce from the lows."

After showing resilience in the last few sessions, the overall market breadth has turned into negative on Tuesday and broad market indices have closed in the red. "This is not a good sign and one may expect further weakness ahead," said Shetti.

Maximum Call open interest of 26.88 lakh contracts was seen at 18,000 strike, which will act as a crucial resistance level in the April series.

Maximum Put open interest of 33.28 lakh contracts was seen at 17,500 strike, which will act as a crucial support level in the April series.

A high delivery percentage suggests that investors are showing interest in these stocks. The highest delivery was seen in Honeywell Automation, Alkem Laboratories, Larsen & Toubro, Power Grid Corporation of India, and Max Financial Services, among others. An increase in open interest, along with an increase in price, mostly indicates a build-up of long positions. Based on the open interest future percentage, here are the top 10 stocks including Aditya Birla Capital, PVR, PI Industries, Bandhan Bank, and GNFC, in which a long build-up was seen. 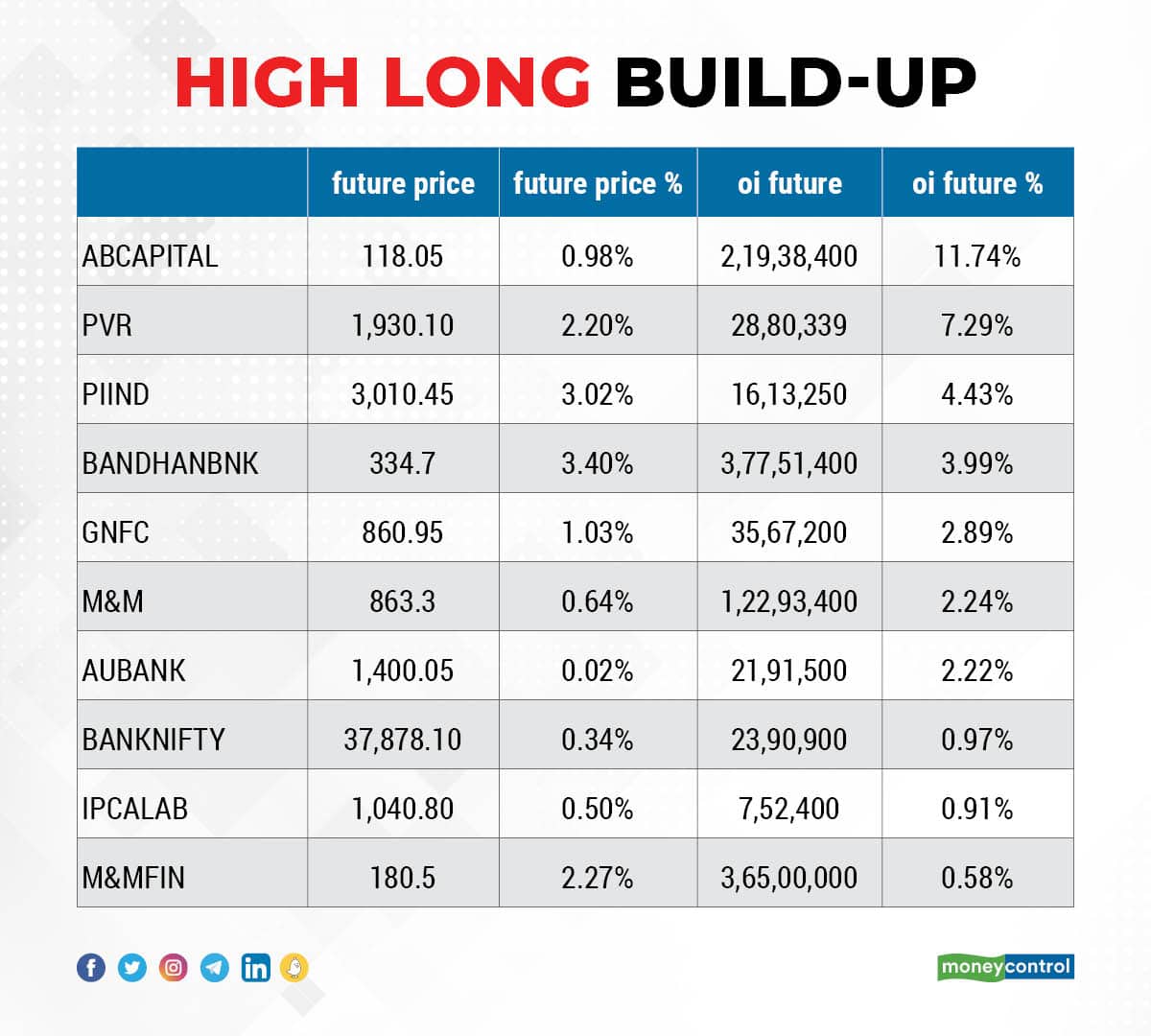 A decline in open interest, along with a decrease in price, mostly indicates a long unwinding. Based on the open interest future percentage, here are the top 10 stocks including Birlasoft, Delta Corp, Honeywell Automation, ABB India, and Whirlpool, in which long unwinding was seen. An increase in open interest, along with a decrease in price, mostly indicates a build-up of short positions. Based on the open interest future percentage, here are the top 10 stocks including Intellect Design Arena, Persistent Systems, Hindalco Industries, United Breweries, and Infosys, in which a short build-up was seen. A decrease in open interest, along with an increase in price, mostly indicates a short-covering. Based on the open interest future percentage, here are the top 10 stocks including Nifty Financial, RBL Bank, Astral, SBI Life Insurance Company, and TCS, in which short-covering was seen. On Monday, the listing day for Veranda, Nomura Singapore had sold 9.78 lakh shares in the learning solutions provider. 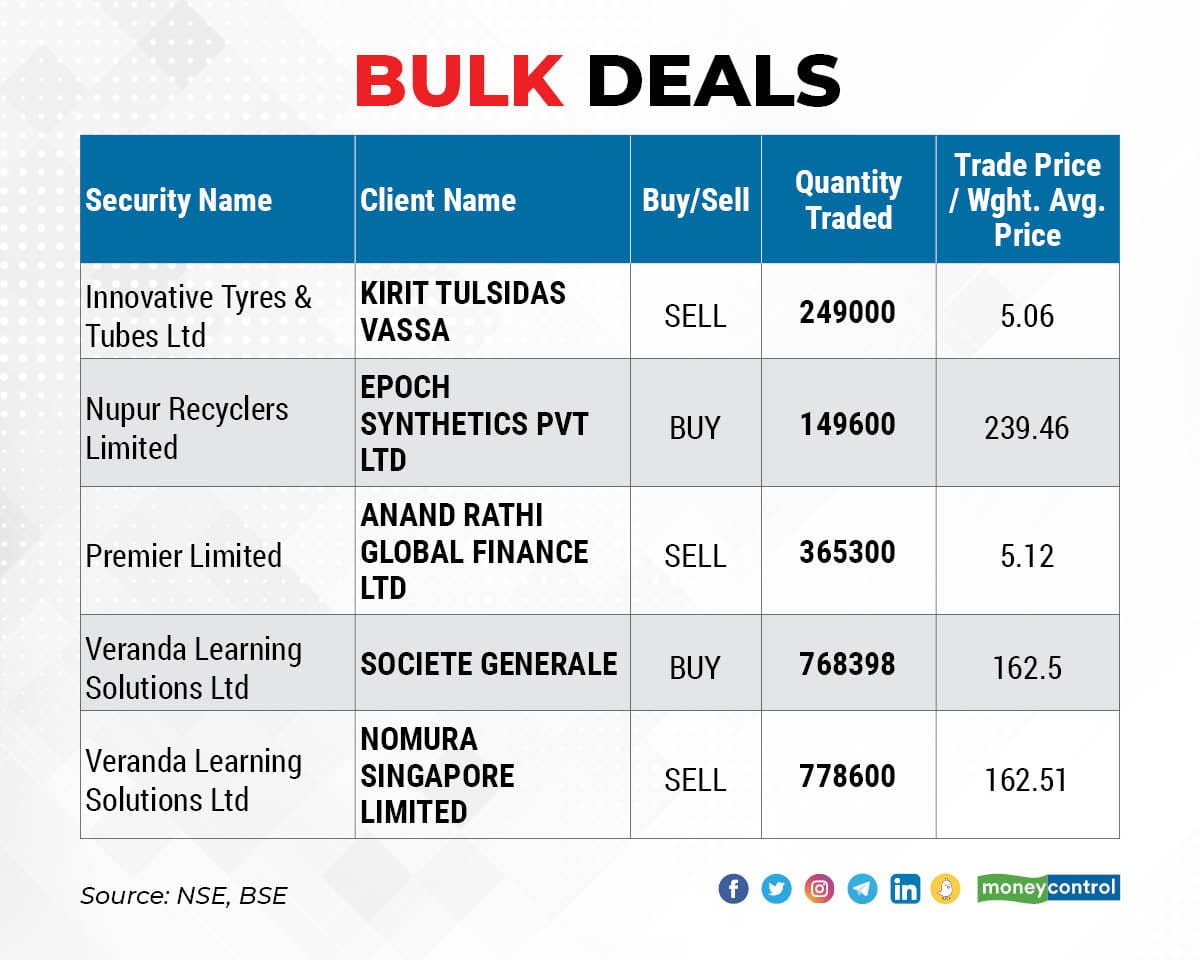 Simplex Infrastructures: The company in a BSE filing said the board has approved raising of funds up to Rs 421.8 crore by issuing equity shares and warrants at a price of Rs 56.61 per share, to Swan Constructions.

TVS Motor Company: Swiss E-Mobility Group (Holding) AG, a subsidiary of the company, has acquired 100 percent shareholding in Alexand'Ro Edouard'O Passion Vélo Sàrl. The acquired company is primarily engaged in the sale of e-bikes as well as e-bike accessories across a range of premium e-bike brands such as TREK, Riese & Muller, Cannondale, Moustache and others. The arm acquired company for CHF 2.79 million.

HeidelbergCement India: The cement company has commissioned a 5.5 Mega Watt (MW) solar power plant in its mining area in Damoh, Madhya Pradesh. The said solar plant is expected to generate 10 gigawatt hours per annum solar energy and the same will replace electricity purchased under short term open access and from grid.

Duroply Industries: Ace investors Porinju Veliyath & his wife Litty Thomas bought 7,000 equity shares in the company via open market transactions on April 12. With this, their shareholding in the company stands increased to 5.61 percent, up from 5.5 percent earlier.

One stock - RBL Bank - is under the F&O ban for April 13. Securities in the ban period under the F&O segment include companies in which the security has crossed 95 percent of the market-wide position limit.

Disclaimer: The views and investment tips expressed by investment experts on Moneycontrol.com are their own and not those of the website or its management. Moneycontrol.com advises users to check with certified experts before taking any investment decisions.
Sunil Shankar Matkar
Tags: #Market Cues #Market Edge #Nifty #Sensex #video
first published: Apr 12, 2022 10:04 pm