Based on the open interest future percentage, a short build-up was seen in 90 stocks including Navin Fluorine International, SRF, Container Corporation of India, Motherson Sumi Systems, and L&T Infotech.

The market remained under pressure for yet another session though there was a sharp recovery from the day's low, extending losses for the second consecutive day on May 9, as a weakening rupee against the US dollar and weak global cues dented sentiment.

The BSE Sensex fell 365 points to 54,471, while the Nifty50 slipped 109 points to 16,302 and formed a bullish candle which resembles the Spinning Top kind of pattern formation on the daily charts, indicating indecisiveness among bulls and bears.

"This pattern reflects high volatility in the underlying. Normally, such formations after a reasonable decline or near the supports sometimes act as an upside reversal pattern post confirmation," Nagaraj Shetti, Technical Research Analyst at HDFC Securities said.

But, "the underlying short term trend of the Nifty continues to be negative and still, there is no confirmation of any bottom reversal as of now," he said.

Shetti further said as long as the market clearly shows sustainable upside in the next 1-2 sessions, the chances of an upside bounce are unlikely. "Any upside bounce from here could be short-lived and that could be a sell-on-rise opportunity. The near term downside target for the Nifty remains around 15,700 levels."

The intense selling pressure continued in broader space as nearly four shares declined for every share rising on the NSE. The Nifty Midcap 100 and Smallcap 100 indices have corrected 1.8 percent and 2.1 percent respectively.

Maximum Call open interest of 27.81 lakh contracts was seen at 17,000 strike, which will act as a crucial resistance level in the May series.

Maximum Put open interest of 40.82 lakh contracts was seen at 16,000 strike, which will act as a crucial support level in the May series.

A high delivery percentage suggests that investors are showing interest in these stocks. The highest delivery was seen in HDFC Bank, NTPC, ITC, Nestle India, and HDFC, among others. 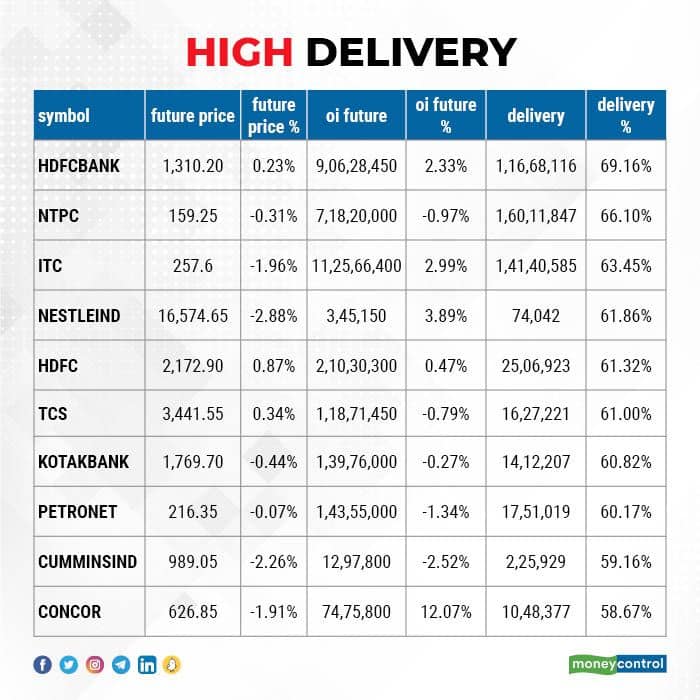 An increase in open interest, along with an increase in price, mostly indicates a build-up of long positions. Based on the open interest future percentage, here are the top 10 stocks including Power Grid Corporation of India, Polycab India, PVR, Indus Towers, and ABB India, in which a long build-up was seen. A decline in open interest, along with a decrease in price, mostly indicates a long unwinding. Based on the open interest future percentage, here are the top 10 stocks including Coromandel International, Coforge, Hindustan Copper, Chambal Fertilizers, and Tech Mahindra, in which long unwinding was seen. An increase in open interest, along with a decrease in price, mostly indicates a build-up of short positions. Based on the open interest future percentage, here are the top 10 stocks including Navin Fluorine International, SRF, Container Corporation of India, Motherson Sumi Systems, and L&T Infotech, in which a short build-up was seen. A decrease in open interest, along with an increase in price, mostly indicates a short-covering. Based on the open interest future percentage, here are the top 10 stocks including L&T Technology Services, Firstsource Solutions, Gujarat State Petronet, Gujarat Gas, and Lupin, in which short-covering was seen. 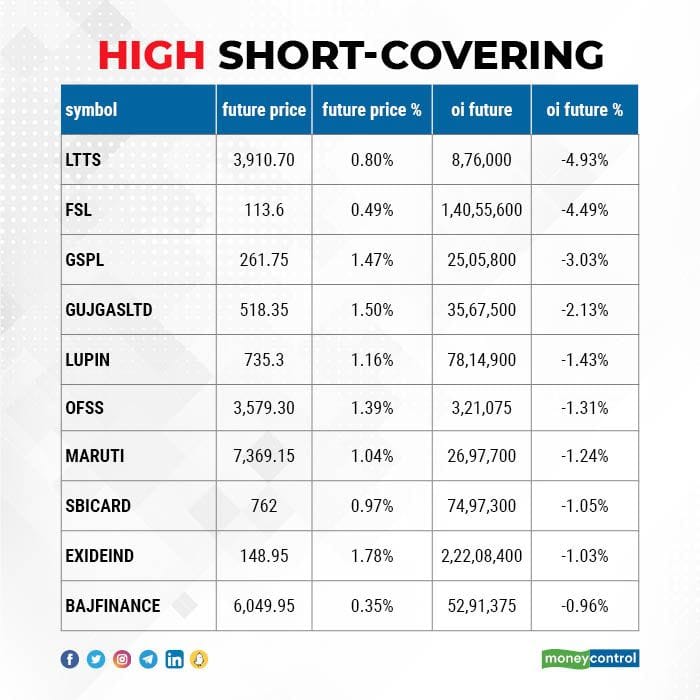 Rainbow Children's Medicare: The company will make its debut on the bourses on May 10. The issue price has been fixed at Rs 542 per share.

Cosmo Films: The company recorded a 45.3 percent year-on-year growth in consolidated profit at Rs 108.2 crore in the quarter ended March 2022, driven by higher operating income and topline. Revenue grew by 22 percent to Rs 821 crore during the same period. The company announced the issue of bonus equity shares in the proportion of one equity share for every two existing equity shares held by the shareholders as on the record date.

HCL Technologies: The IT company announced a strategic partnership with Syniti and will adopt the Syniti Knowledge Platform (SKP) as its strategic data migration platform to provide customers with improved data management strategy and higher quality data. The wholly owned subsidiary of the technology company will acquire Bengaluru-based Quest Informatics, an aftermarket, Industry 4.0 and IoT company, in an all-cash deal and the said deal is expected to be complete before July 31, 2022.

KEI Industries: The company clocked a 35 percent year-on-year growth in consolidated profit at Rs 116 crore in the quarter ended March 2022, led by other income, operating income and robust topline. Revenue during the quarter increased by 44 percent to Rs 1,792 crore YoY.

Gujarat Narmada Valley Fertilizers & Chemicals: The company more than doubled its consolidated profit to Rs 643 crore in Q4FY22, up from Rs 310.5 crore in the same period last year, due to strong operating income and topline. Revenue grew by 60 percent to Rs 2,772 crore compared to the year-ago period.

Godrej Agrovet: The company reported a 120.6 percent year-on-year growth in consolidated profit at Rs 140 crore in Q4FY22 driven by higher other income, operating income and robust topline. Growth in profitability was largely driven by animal feeds, vegetable oil and Astec LifeSciences, while crop protection and food businesses reported a decline in operating margin. Revenue increased sharply by 42 percent to Rs 2,081 crore compared to the year-ago period.

VST Tillers and Tractors: The company registered a 71 percent year-on-year growth in profit at Rs 22.1 crore in the quarter ended March 2022 on the back of 285 percent YoY growth in EBITDA at Rs 30.15 crore. Revenue grew by 12 percent to Rs 218.4 crore during the same period.

The NSE has not put any stock under the F&O ban for an eighth consecutive session on May 10, especially since the beginning of the May series. Securities in the ban period under the F&O segment include companies in which the security has crossed 95 percent of the market-wide position limit.

Disclaimer: The views and investment tips expressed by investment experts on Moneycontrol.com are their own and not those of the website or its management. Moneycontrol.com advises users to check with certified experts before taking any investment decisions.
Sunil Shankar Matkar
Tags: #Market Cues #Market Edge #Nifty #Sensex #Trade Setup #video
first published: May 9, 2022 10:17 pm