The positive momentum built up from the start of week fizzled out in the last session after Finance Minister Nirmala Sitharaman presented the Budget and Nifty ended with 0.2 percent gains for the week ended July 5, forming Shooting Star formation on the weekly scale.

"The chart pattern suggests that if Nifty crosses and sustains above 11,860, it would witness buying which would lead the index towards 11,980-12,100," Rajesh Palviya, DGM - Research ( Head Technical & Derivatives Research), Axis Securities told Moneycontrol.

The BSE Midcap and Smallcap indices underperformed frontliners, falling 1.4 percent on July 5 and over half a percent for the week.

Maximum Call open interest (OI) of 23.12 lakh contracts was seen at the 12,000 strike price. It will act as a crucial resistance level for the July series.

Maximum Put open interest of 16.07 lakh contracts was seen at 11,500 strike price. It will act as a crucial support level for the July series. 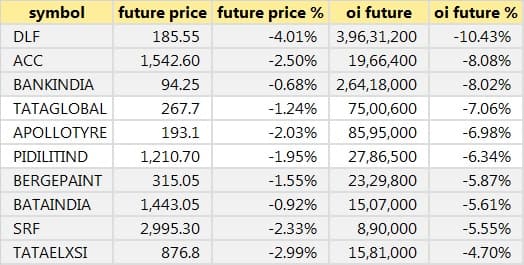 Navkar Builders: Board meeting is scheduled on July 12 to appoint Saurabh Jayswal as Company Secretary of the company, to declare dividend for FY19.

ABB India: As per NCLT, Bengaluru Bench's order it is proposed to convene meetings of shareholders and unsecured creditors on August 9.

Jindal Stainless: Investors meeting to be held on July 8.

AstraZeneca Pharma India: One-on-one meeting with Finvest Advisors is scheduled to be held on July 8.

Balrampur Chini Mills: Company's representative(s) would be interacting on July 11 in a one-to-one meeting with official(s) of Spark Capital Funds.

Adhunik Industries: Mahesh Kumar Agarwal, Non-Executive Director (Chairman) of the company, has resigned from the post of directorship.

City Union Bank: Bank is registered as a mutual fund distributor with BSE Star Mutual Fund platform for distribution and redemption of mutual fund units in India through a web-based platform.

PPAP Automotive: Manish Dhariwal has resigned from the position of Chief Financial Officer of the company.

Asit C Mehta Financial Services: Mamta Gautam has resigned from the position of Chief Financial Officer (CFO) of the company.

Bharti Infratel: Company has received a credit rating of A1+ from CRISIL for the commercial paper programme.

Frontline Securities: Board has taken on record the completion of buyback of 18,85,151 equity shares of Rs 40 each amounting to Rs 7.54 crore.

Olympic Cards: The company said term loan EMI amount of Rs 0.1564 crore has been paid on July 3 to ICICI Bank and there is no default amount payable to the bank as on date.

Zuari Agro Chemicals: Urea/ammonia plants of the company have been shut down due to tube leak of the PG- Reboiler in the CO2 removal section of the Ammonia plant.

KPI Global: Company signed Power Purchase Agreement (PPA) with B N Papers, Surat for sale of 1.10MW solar power for a period of 15 years under the category of Independent Power Producer (IPP).

Competent Automobiles Company: Company has concluded the sale of its immovable property situated at Dada Bari, Mehrauli, New Delhi for a total consideration of Rs 31 crore.

JK Tyre: CARE revised credit rating on company's long term bank facilities to A from A+ with a negative outlook.

JSW Energy: CARE reaffirmed the long term rating of the company at AA-; stable and short term rating at A1+.

KM Sugar Mills: External rating which was BBB- and has been upgraded to BBB with a stable outlook by Brickwork.

BLS International Services: Company which was hitherto operating the Premium Lounge and other services as per the contract with Sopra Steria Limited on behalf of the United Kingdom Visas & Immigration (UKVI) have transferred the operational delivery of these services to Sopra Steria Limited.

Reliance Power: CARE revised long-term and short-term ratings of Sasan Power Limited to BB+ (negative outlook) and A4 respectively attributing inter-alia on account of significant weakening in financial risk profile of the parent Company (Reliance Power Limited) coupled with continual uncertainty over the compensatory tariff implementation towards change in law during construction & foreign exchange variations. The company strongly disagrees with the revised ratings assigned by CARE, it said.

For July 8, DHFL and Reliance Capital are under the F&O ban period.