Based on the open interest future percentage, here are the 59 stocks including GNFC, Honeywell Automation, SBI, NTPC, and Indus Towers, in which a short build-up was seen.

The market started off day on a robust note but the end was pathetic on May 13 as the benchmark indices lost all its gains in last hour of trade and closed with moderate losses weighed down by banking & financial services, metal and select technology stocks.

"The way Nifty has given up around 300 points from the intraday high of 16,083 is hinting at a lack of conviction on the part of bulls about the sustainability of the upmove at higher levels," Mazhar Mohammad, Founder & Chief Market Strategist at Chartviewindia said.

The only positive thing remains the fact that the advance decline ratio almost remained decisively in favour of bulls who were able to safeguard the intraday low of last Thursday's session present around 15,735 levels, he added.

More than two shares advanced for every share declining on the NSE, helping the Nifty Midcap 100 and Smallcap 100 indices rise a percent each.

Hence, Mazhar Mohammad feels, going forward, it remains critical for the Nifty50 to sustain above the said low (15,735) as the breach of this can eventually drag down the index towards 15,400 levels where some support is visible.

On the upsides, strength shall not be expected unless Nifty manages a close above 16,000 mark for couple of sessions, he said.

For time being it looks prudent for market participants to confine themselves to the fences, he advised.

Maximum Call open interest of 36.73 lakh contracts was seen at 17,000 strike, which will act as a crucial resistance level in the May series.

A high delivery percentage suggests that investors are showing interest in these stocks. The highest delivery was seen in Petronet LNG, Ipca Laboratories, Crompton Greaves Consumer Electricals, M&M, and Bharti Airtel, among others. A decline in open interest, along with a decrease in price, mostly indicates a long unwinding. Based on the open interest future percentage, here are the top 10 stocks including Intellect Design Arena, Chambal Fertilizers, Oracle Financial Services Software, Nifty, and Abbott India, in which long unwinding was seen. 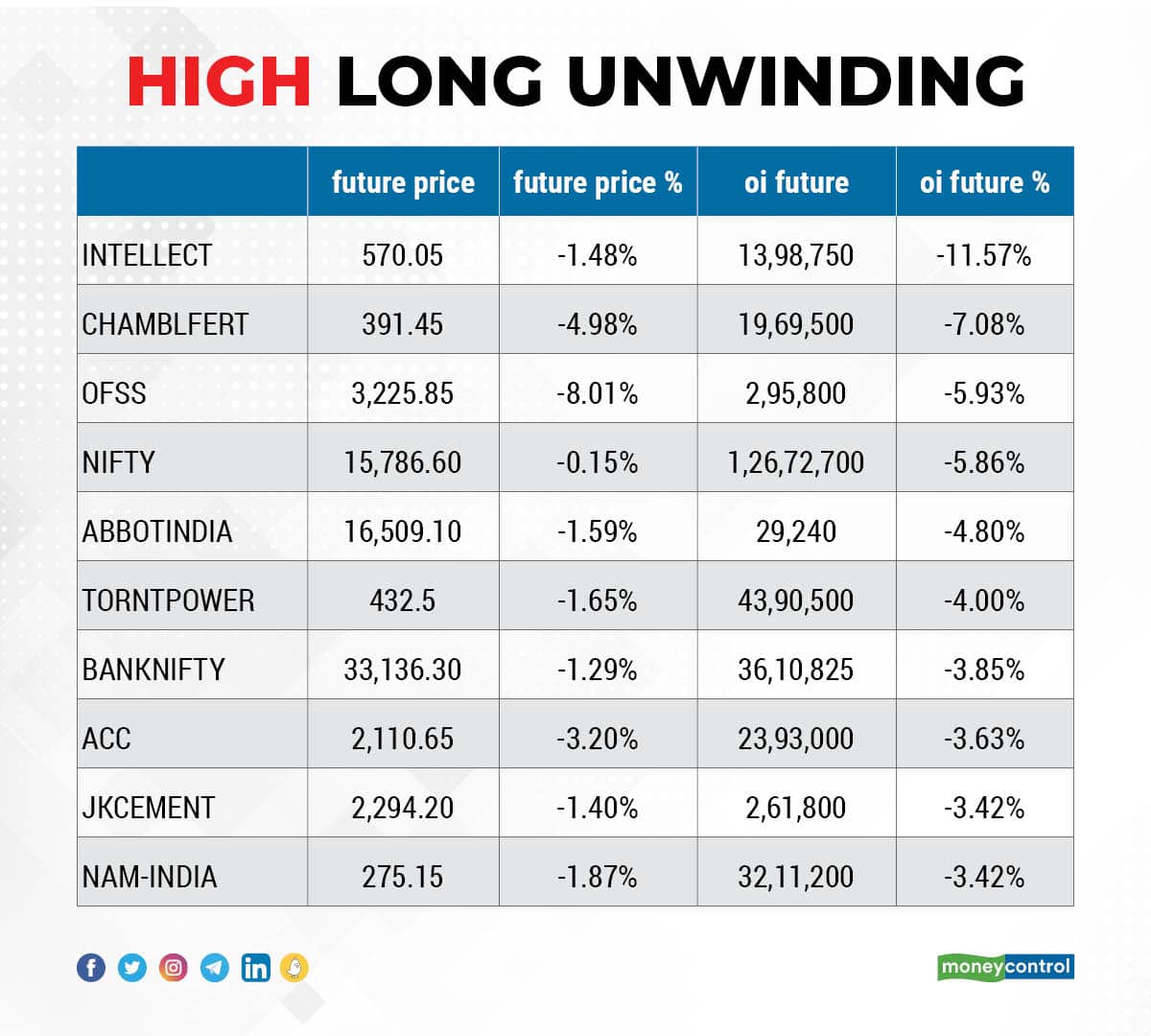 An increase in open interest, along with a decrease in price, mostly indicates a build-up of short positions. Based on the open interest future percentage, here are the top 10 stocks including GNFC, Honeywell Automation, SBI, NTPC, and Indus Towers, in which a short build-up was seen. A decrease in open interest, along with an increase in price, mostly indicates a short-covering. Based on the open interest future percentage, here are the top 10 stocks including Indraprastha Gas, Apollo Tyres, Coforge, Can Fin Homes, and Alembic Pharmaceuticals, in which short-covering was seen. 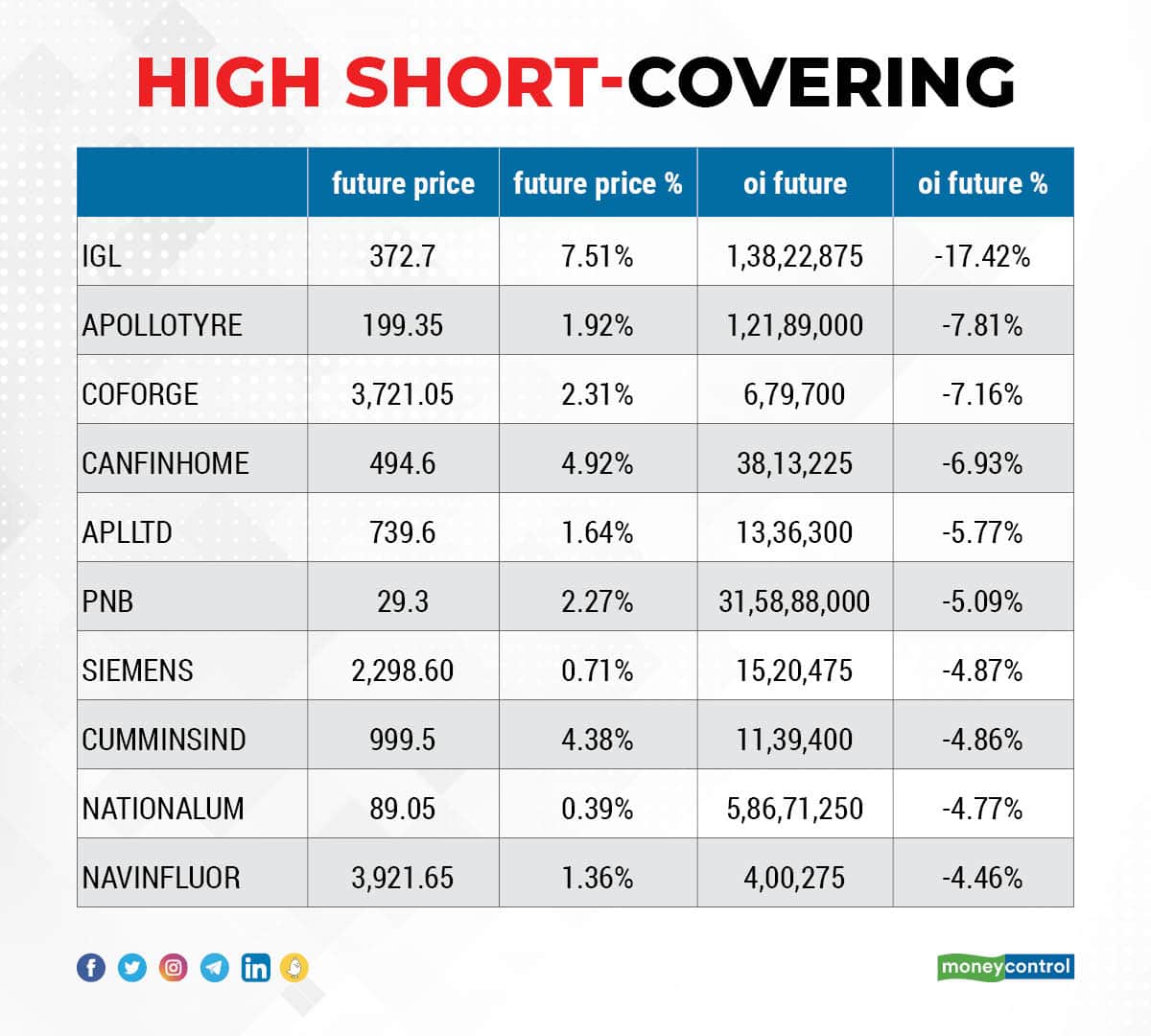 Tech Mahindra reported a 10 percent sequential rise in its consolidated net profit to Rs 1,506 crore for the quarter ended March 2022, which was above analysts' expectations of Rs 1,411 crore. The IT services major reported a 5.8 percent quarter-on-quarter rise in consolidated revenue from operations to Rs 12,116 crore for the reported quarter. The firm won deals worth over $1 billion in the January-March period.

Maruti Suzuki India completed the process of allotment of an 800 acre site in Haryana state for its proposed plant, according to a statement on exchanges. The plans investment of more than Rs 11,000 crore in the first phase. The first plant with a manufacturing capacity of 2.5 lakh vehicles a year is expected to be commissioned by 2025. The site will have space for capacity expansion to include more manufacturing plants.

Amber Enterprises reported net profit for the fourth quarter that missed the average analyst estimate. Net profit for the quarter stood at Rs 57.22 crore, down 24 percent year-on-year against the estimates of Rs 117 crore. Revenue rose 21 percent from a year ago to Rs 1,940 crore versus estimate of Rs 2,144 crore. The firm also approved raising Rs 500 crore via securities.

Eicher Motors reported net profit for the fourth quarter that beat the average analysts’ estimates. Net profit for the quarter rose 16 percent year-on-year to Rs 610 crore versus an estimate of Rs 596 crore. Revenue grew 9 percent from a year ago to Rs 3,190 crore against estimates of Rs 3,183 crore. The growth was led by YoY increase in average selling prices (ASPs) due to a richer model mix and price hikes taken over the past few quarters. This, however, was partly offset by YoY decline in volumes for Royal Enfield.

Alkem Laboratories said on exchanges that the Medicines and Healthcare products Regulatory Agency (MHRA) has pointed out no critical or major observations at its Taloja Plant. The company said the MHRA has closed its inspection.

Nazara Technologies net profit for the March quarter fell 71 percent quarter-on-quarter to Rs 4.90 crore versus Rs 17.10 crore. Revenue for the quarter fell 6 percent sequentially to Rs 175.10 crore against Rs 185.80 crore. The firm also announced that it will give 1:1 bonus share to its shareholders. Three stocks - GNFC, Indiabulls Housing Finance, and Punjab National Bank - are under the F&O ban for May 16. Securities in the ban period under the F&O segment include companies in which the security has crossed 95 percent of the market-wide position limit.

Disclaimer: The views and investment tips expressed by investment experts on Moneycontrol.com are their own and not those of the website or its management. Moneycontrol.com advises users to check with certified experts before taking any investment decisions.
Sunil Shankar Matkar
Tags: #Market Cues #Market Edge #Nifty #Sensex #Trade Setup #video
first published: May 15, 2022 05:42 pm