The percentage of pledged promoter holdings reduced to 7.4 percent in the March quarter from 7.8 percent in December, according to a report from Kotak Institutional Equities

The percentage of pledged promoter holdings declined in the March 2018 quarter in comparison to the December quarter. But as many as 30 stocks saw an up to 17 percent increase in promoters pledging their share in the BSE 500 index.

The percentage of pledged promoter holdings reduced to 7.4 percent in the March quarter from 7.8 percent in December, according to a report from Kotak Institutional Equities. “Promoters pledged shares worth Rs 1.8 lakh crore, which is about 1.43 percent of the BSE 500 Index’s total market capitalisation in March. Promoters of 128 companies on the BSE 500 index pledged their holdings,” it said.

Dinesh Rohira, Founder and CEO, 5nance.com, said since pledging shares to a lender is common in business, a study of patterns in which it is executed or pledged is important for investors. “Though pledging of shares creates long-term value for the business, it tends to result in high volatility in the stock price. Further, it also indicates a weaker management and its inability to generate working capital requirement from business operations.” 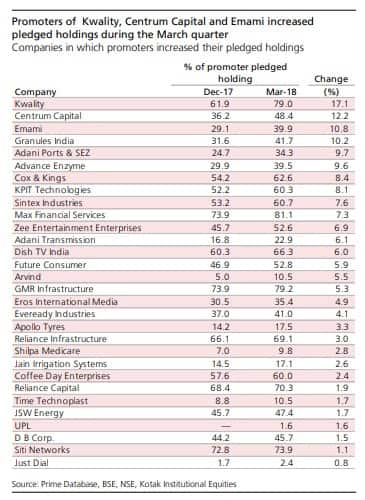 Fresh promoter pledges were seen in UPL while promoters who revoked their entire pledged holdings include companies like SRF and SH Kelkar.

“Pledging of shares do not necessarily imply a company or promoter is under financial stress. Banks (lenders) could have sought additional security in the form of promoter shares,” clarified Kotak Institutional Equities.