Top 14 largecap, midcap stocks to bet on ahead of 2019 Lok Sabha polls: Edelweiss

It is the election haze when poll uncertainties build up, electioneering noise rises and it is easy for investors to get cautious, but anecdotal evidence suggests that markets have usually done well in the run-up to elections, Edelweiss Securities said in a report.

Over the past two decades, India has usually done well in the 12 months leading to an election on an absolute basis (three out of five times) and relatively (four out of five times), the brokerage said in its report.

India has come a 'half circle', which means its macroeconomic situation has moved from robust to risky. Its micro-economic situation, which was lagging behind all this while, is now looking up. This mix is likely to keep the market going around in circles in the run-up to the election, Edelweiss said.

There are the global challenges of oil, interest rates, and currency risks due to the current account deficit.

"We worry on the currency, are ambivalent on the fiscal & rates (but do not expect them to rise) and comfortable on inflation. That leaves the macro reversal at ‘Half Circle’, likely collaring the broader market," the brokerage said. 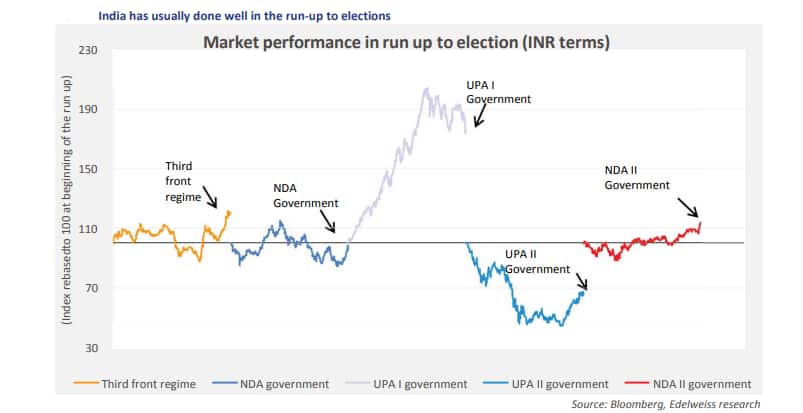 Edelweiss also said that India's valuations, its relatively poor performance and the election haze are likely to collar the market (19-17 times one-year forward: 11,500-10,500 on Nifty). It, however, added that the market is throwing up sectoral and stock-specific opportunities and recommended picking them up.

The fact that the impact of specific governments on the market has been diminishing over time indicates that investors should actually scout for investing opportunities rather than steering clear of the apparent overhang.

The market could well go around in circles over the next year, and it makes sense to remain stock or sector-specific. The brokerage said it sees momentum building up in IT (digital backed by currency upsides), rural (changing terms of trade, election sops), industrial (smelling small capex now) and private banks (market opportunity).