The Nifty 50 lost 0.8 percent last week but stayed consistently above the crucial 17,000 mark as well as the 200-day moving average of about 17,030 in the past six straight sessions. The first half of this week will likely give a fair idea of the short-term direction

After a stellar run in the previous two weeks, India’s stock market entered a consolidation phase and there was some profit booking as the key indices declined in four of the five sessions in the week ended March 25. Mounting inflation concerns amid elevated commodity prices including crude oil that climbed above $120 a barrel again and the continuing war between Ukraine and Russia weighed on market sentiment.

The Nifty 50 lost 0.8 percent during the week to close a tad above 17,150 after a 6.4 percent rally in two straight sessions previously. The important point to note is that the index consistently stayed above the crucial 17,000 mark as well as the 200-day moving average (at about 17,030) in the past six straight sessions. There was rangebound trade and mild profit taking, indicating that the level could act as a crucial support, while the upside resistance was at 17,450, above which the index could rise to 17,800-17,900, experts said.

“Let's see how things unfold and if there is no aberration globally, we are most likely to hold the sacrosanct support zone of 17,000-16,900,” said Sameet Chavan, chief analyst-technical and derivatives, at Angel One.

He said the first half of the forthcoming week would certainly give us a fair idea of the short-term direction. Till then, 17,350-17,450 are to be considered as the immediate hurdles.

Apart from that, the broader market did extremely well last week, with the Nifty Midcap 100 and Smallcap 100 indices rising 1 percent and 0.25 percent, respectively.

“We expect it to continue in the current week as well. Hence traders can look to identify such potential themes to fetch higher returns,” Chavan said.

Here are the top 10 trading ideas by experts for the next 3-4 weeks. Returns are based on March 25 closing prices:

The stock price has been taking support at the 200-day EMA (exponential moving average). Oscillators like relative strength index (RSI) and money flow index (MFI) are placed above 60 and rising, indicating strength in the stock’s current uptrend.

Hotel stocks are looking good on the charts for the short to medium term.

The stock price has broken out from a symmetrical triangle on the weekly chart with higher volumes where it closed at the highest since November 18, 2021. The stock has been taking support at the 200-day EMA over the past couple of months.

The RSI and MFI have witnessed a trendline breakout, indicating a higher possibility of a sharp rise in the price in the coming days. Hotel stocks are looking good for the short to medium term.

After a short-term correction, the stock has formed a higher bottom pattern. The stock has recovered over 10 percent from the monthly lowest level. A promising pullback rally along with a higher bottom formation indicate a further uptrend from current levels.

Currently, the stock is trading above the 20-day SMA (simple moving average). Looking at the overall pattern, it offers a buying opportunity for positional traders with a decent risk-reward ratio. The trend reversal move is likely to continue up to Rs 735. After a medium-term correction, the stock took support near Rs 1,000 and reversed. Post-reversal, SBI Life is holding a higher low formation, which is broadly positive. Currently, the stock is consolidating in the Rs 1,070 to Rs 1,140 range.

The stock completed one leg of correction and promising reversal formation, indicating a strong possibility of a quick pullback rally from current levels. 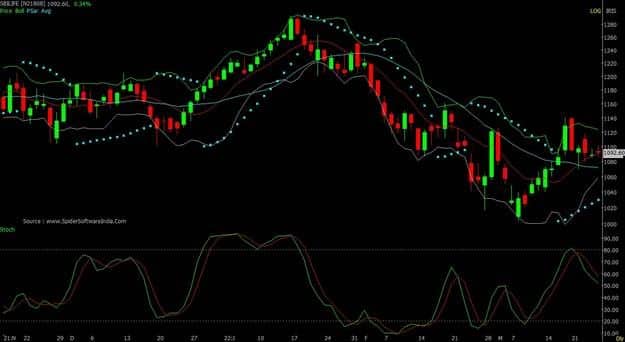 From the monthly lowest level, the stock rallied over 15 percent. On the daily and intraday charts, the stock consistently formed a higher bottom formation, which is broadly positive.

In addition, after a long time, it closed above Rs 3,650 on the weekly charts. As long as the stock trades above Rs 3,529, the chances of hitting Rs 3,900 turn bright. We expect the uptrend formation to continue unless it slips below Rs 3,529. The stock has broken out at about Rs 4,280 after consolidating at the 50 EMA level. The stock has formed a major support level at Rs 3,540.

Volumes are expanding, with the weekly 14 period RSI showing a positive indication, which suggests further strength in the stock price. On the weekly charts, the stock is trading above all major moving averages. After reaching a high of Rs 551 in October 2021, the stock has gained support at Rs 407 and has moved upwards since.

However, the stock recently broke its previous high and went up to Rs 630. Also, on the daily charts, MACD (moving average convergence divergence) crossed its signal line, which qualifies as a bullish trend in the stock.

We recommend a buy with a stop-loss of Rs 569 and a possible price target of Rs 690. The IT space is witnessing a gradual recovery post the recent short-term corrective phase. After a pricewise correction, the stock managed to form a support around its ‘200 DEMA’ and has seen some consolidation.

The stock is on the cusp of a breakout from a consolidation on the lower time frame charts and this should lead to a resumption of its uptrend in the short term.

The risk-reward ratio is favourable at current levels to initiate fresh longs and hence, short-term traders should look for buying opportunities in this stock. The stock managed to consolidate in a range when the broader markets were correcting and hence, has seen a relative outperformance. The longer-term trend for the stock is still positive and the recent consolidation just seems to be a timewise correction within an uptrend.

In the past couple of sessions, volumes have picked up along with the price rise and the short-term moving average (5 DEMA) has given a positive crossover over the medium term (20 DEMA).

The RSI-smoothed oscillator is also indicating a positive momentum. This indicates the probability of a resumption of the broader uptrend and hence, traders should look to buy this stock for the short term.

Traders can look to trade with a positive bias and buy the stock in the range of Rs 240-238 for a potential target of Rs 252 in the near term. One should place a stop-loss below Rs 233 on long positions.