Time to invest in midcaps? Here are 12 PMSes to choose from

History suggests that while largecaps kick off a rally, it is the midcaps that lead the show as the bull run spreads wider and deeper

After three months of gloom (June to August), September offered some respite to investors as both the Sensex and the Nifty managed to break above crucial resistance levels, thanks to the fiscal stimulus provided by the Finance Ministry.

The frontliners lead the rally. The Nifty50 gained about 4.1 percent in September, outperforming both Nifty Midcap 100 (2.4 percent) and Nifty Smallcap 100 (2.7 percent).

History suggests that, while largecaps kick off a rally, it is the midcaps that lead the show as the bull run spreads wider and deeper.

Similarly, in the calendar years 2012 and 2009, the midcap index jumped 38 percent and 107 percent, respectively, after years of poor returns.

The midcap space is in a similar position now. In the first nine months of 2019, the NSE Midcap 100 index wiped off 8.8 percent against a 7 percent rise in the Sensex.

Based on the belief that midcaps might be the way going forward, research-based wealth management firm, PMS AIF World, collated a list of 12 Portfolio Management Services (PMS) schemes that have a substantial weight in midcap and multicap space. 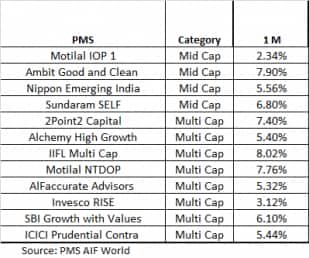 In the midcap category, Ambit Good and Clean gave the maximum return at 7.9 percent. The PMS manages an AUM of Rs 121.3 crore spread across largecap (20 percent), midcap (40 percent) and smallcap (3 percent). 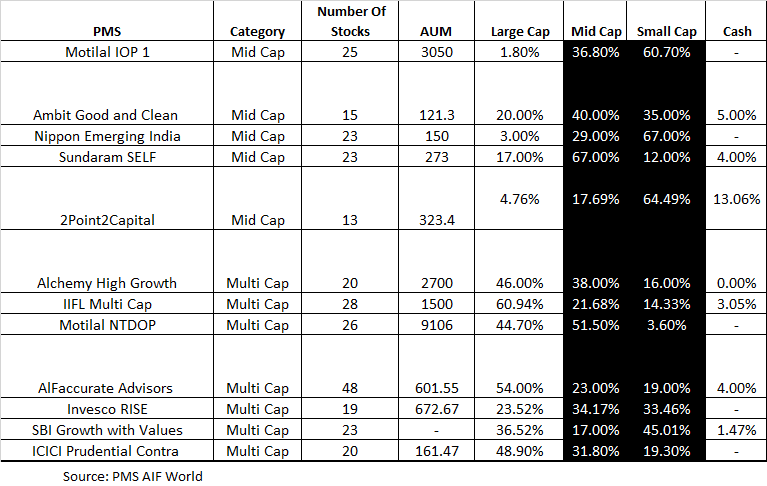 According to Kamal Manocha, the founder of PMS AIF World, "for midcap investments through PMS, a multicap PMS should be a preferred route."

"Pure midcap and/or smallcap PMS is a very high-risk equity instrument and is meant for investors specifically looking to make such investments, and also have 10 yrs or more time horizon," he added.

Disclaimers: The data analysed by PMS AIF World is up to September 30, 2019.
Amongst PMSes with more than 35 percent allocation to mid-smallcaps, top 12 names have been picked by PMS AIF World on the basis of long-term out-performance on their respective benchmarks. One month return is just to highlight the recent performance.