It was a volatile week for the benchmark indices which closed mixed for the week ended September 18 but plenty of action was seen in the Small & Midcap space.

There are as many as 20 stocks out of 96 which rose more than 20 percent in the last five sessions that include names like Man Industries, Skipper, Ramco Systems, 8K Miles, Vinati Organics, and JB Chemicals, etc. among others. 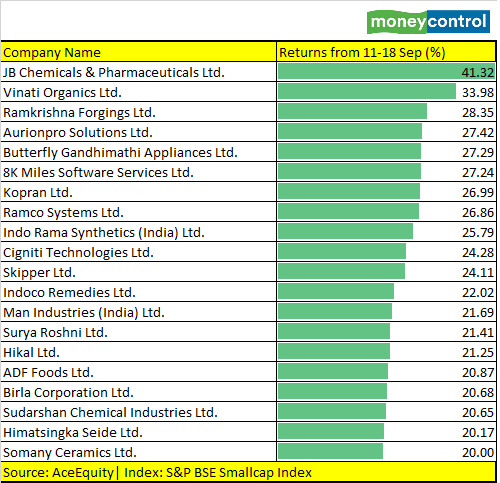 The recent SEBI guidelines on the Multicap funds have opened room for more money to flow into smallcap space which remains underweight in most mutual fund portfolios."With the broader markets beaten down to the extreme level in the steep correction of Feb/March, there was the flow of smart monies towards broader markets since May/June period. The recent SEBI regulation on multicap funds has only boosted the opportunistic flows into midcap/smallcap space," Gaurav Dua, SVP, Head Capital Market Strategy & Investments, Sharekhan by BNP Paribas told Moneycontrol.

In terms of sectors, IT and Healthcare as well as Realty were the top sectors that closed with gains of more than 5 percent.

Most of the stocks in the IT and pharma space hit a fresh 52-week high in the week gone by. Pharma stocks have shown significant outperformance vis-à-vis the index and amid rise in COVID cases.

"Pharma has been the leader of the current up move since the start of the rally from Apr’20 after a huge underperformance over many years. Regular drug approvals from USFDA, improved pricing in international markets, and weaker currency led benefits have accrued for the sector," Rajeev Srivastava, Chief Business Officer at Reliance Securities told Moneycontrol.

For IT stocks, experts are of the view that positive earnings as well as work from home is likely to boost demand for IT services.

“Positive earnings and the additional demand of IT due to Work from home and the rapid digitization of Businesses have led to the rise of IT stocks. Few of IT major has given better growth guidance which has fueled the sector,” Gaurav Garg, Head of Research at CapitalVia Global Research Limited told Moneycontrol.

The index is likely to retest August highs of 11800 in the coming week, and the support is seen at 11300 levels for the September series expiry. But, the broader market is likely to outperform.

“Going ahead, we expect the index to resolve higher and retest the August high of 11800 in the coming weeks. Thus, any dip from hereon should be capitalised as an incremental buying opportunity. In the process, we expect the broader market to endure its relative outperformance,” Dharmesh Shah, Head - Technical, ICICI direct told Moneycontrol.

“We believe the Nifty has undergone healthy retracement, as it took 15 sessions to retrace 61.8% of preceding 19 sessions up move (10882-11794), 11230. A slower pace of retracement signifies robust price structure that augurs well for next leg of up move,” he said.

Shah further added that the formation of a higher peak and trough on the weekly chart signifies positive bias, which makes us confident to revise the support base upward at 11300.