As the year 2018 is drawing to an end, comparisons are bound to be drawn in terms of annual returns as compared to last year's.

However, the big talking point is the number of stocks that gave multibagger returns. In 2017, Smallcap index rose 60 percent and saw 167 multibaggers which include names like HEG, Indiabulls Ventures, Graphite India, Venky’s India, and Avanti Feeds. In 2018, that number reduced to just 5 — that's a 97 percent fall from previous year's number of 167. 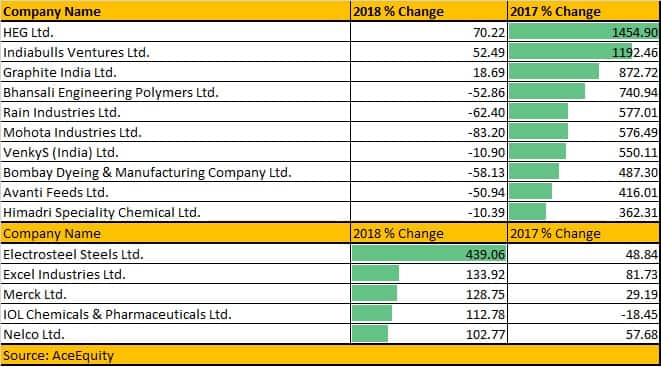 Market performance in 2018 was a complete contrast to 2017. The year started with a bang and benchmark indices continued to hit record highs, but the momentum fizzled out post Budget.

“We expect 2019 to be a year of high volatility in the beginning due to domestic and global factors and high asset prices but the volatility should ease towards the end of the year as asset prices reduce,” she said.

The biggest casualty of the year 2018 was the mid and the small-cap space.

In the case of frontline indices, they touched record highs in August with the help of heavyweights, but fell sharply post that. Nifty saw heavy selling pressure around 11,000 and for Sensex it was above 36,000.

2019 should be a fruitful year for investors and placing bets on the right stocks should help create wealth. Why the optimism? Well, after a double-digit correction seen in 2018, the valuations have come down to attractive levels, even though the broader market is still trading at a premium.

“In 2018, the number of multibaggers have dropped as high valuations have had an impact on performance, the BSE smallcap index is down 27% from its 52-weeks high. The midcap index was at a premium of 37% in terms of PE multiple to the Sensex, thus a correction was inevitable,” Vivek Ranjan Misra, Head of Fundamental Research at Karvy Stock Broking told Moneycontrol.

“We believe that 2019 is unlikely to be a year where there will be many multibaggers. The mid and smallcaps tend to outperform when they are at a significant discount (at least 20%) to largecap valuations, whereas they are at par now,” he said.

Misra further added that in the near to mid-term, we expect largecaps to perform better as mid and smallcap valuations are not yet favourable.

The first half of 2019 may prove to be difficult for equities on account of the elections. Lastly, the turn in the interest rate cycle means liquidity condition is not as loose as in 2017, which can be a drag on performance, he added.