172@29@17@247!~!172@29@0@53!~!|news|business|markets|markets-could-be-volatile-if-donald-trump-wins-ur-bhat-961709.html!~!news|moneycontrol|com!~!|controller|infinite_scroll_article.php!~!is_mobile=false
Subscribe to PRO at just Rs.33 per month. Use code SUPERPRO
you are here: HomeNewsBusinessMarkets

Markets could be volatile if Donald Trump wins: UR Bhat

If Donald Trump wins the correction won't be too deep but the market will remain volatile as a potential Trump victory has not been factored in, says UR Bhat, Director of Dalton Capital Advisors.

With no rate hike in the last US Fed meet, investors have shifted their focus to the geopolitical scenario, which is dominated by the US Presidential race.

As the two US presidential nominees, Hillary Clinton and Donald Trump prepare to go head-to-head today in the much awaited debate, the uncertainty this election poses has kept investors sceptical worldwide.

If Donald Trump wins, the correction won't be too deep but the market will remain volatile as a potential Trump victory has not been factored in, says UR Bhat, Director of Dalton Capital Advisors.

In an interview with CNBC-TV18, Bhat said that Trump's unpredictable nature and the lack of clarity on his policies can scare the markets if he is elected. 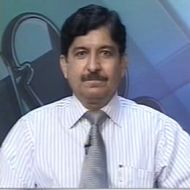 On the domestic front, he said that emerging markets like India will remain a favourite spot for foreign investors till the next US Fed rate hike.

He further said if foreign money continues to flow in, the market should trade in a range despite selling by domestic institutions.

Below is the verbatim transcript of UR Bhat’s interview to Reema Tendulkar and Prashant Nair on CNBC-TV18.

Reema: The big cue that we will be tracking today will be the first presidential debate between the two candidates that will be at 6.30 am India time tomorrow and that might just kick-start the market's attention to the US presidential race. Do you think that is a risk we haven't factored in and it could lead the markets down till November?

Reema: How deep could the correction be if it is Trump who is voted to power?

A: I don't think the correction would be so deep, it would be volatile. The volatility index (VIX) would go up quite dramatically because the markets have not factored in a potential Trump presidency and he is sort of not exactly predictable. So, therefore there would be a lot of difference.

Prashant: Although he has clarified that he doesn't mind Indians.

A: That is one of the small mercies.

Reema: So, volatility, but not a correction?

A: Volatility yes, very high volatility but correction may not be -- because there are further debates ahead and election is quite some time hence.

Prashant: How is the market going anyway irrespective of all of that because they have got a mind of their own, pretty much everyone recognises that it is very hard to find new ideas or even allocate money to relatively underperforming sectors? So, outperformer is 300 percent and underperformer is 150 percent. So, what do you do?

A: You should expect that as long as emerging markets (EMs) continue to be favourites of foreign investors, which is likely to continue till US interest rate hike happens. So, the market would continue because it is nobody's argument that the markets are cheap or there are huge pockets or value somewhere. Everybody is of the view that the markets are a bit expensive. But you cannot argue with the flow of money. So, if the flow of money continues despite selling by the domestic institutions, the markets would continue to be at least trading in a range as we have seen for the last several months now.

Reema: And after the range?

A: After the range whenever there is an interest rate hike in the US, there are so many risks around -- there will be election very shortly and after that if something like a Trump presidency happens there will be something like a Trump presidency happens then there will be huge volatility, even correction because at least till he makes his state of the union address people will not know what his policies are. But it will unsettle markets quite a lot.

Prashant: Road construction is very well advertised, there is nothing new which people don’t know about, how road orders are awarded, what is the pickup per day, what is the road construction, Nitin Gadkari himself is one of the most vocal speakers. Now, in a sector like that, there are many companies, and I was talking to somebody, there are many companies, old relics, which were grappled by lots of debt issues from the last bull market essentially, which got trashed 80-90 percent, which have risen quite a bit now, 50-60 percent but where market capitalisations are still a fraction of what their current annual revenues are. Sector wise it is the right sector, one of the very few sectors where there is visible momentum but do you think one should look at those kind of opportunities, explore a bit more, do some more research?

A: Certainly it calls for further research because there will be certainly winners there but we don’t know whether they are the ones, which already run up or the ones which have been left behind. It all depends on the flow of orders and the way they manage those orders because there are quite a few orders which may end up making losses. So, therefore this is very difficult for us to estimate, which are the ones that are going to be potentially very lucrative because quite a lot of that depends on -- just EPC, it is fine but if they are doing tolling then it depends on how the flow of traffic is.

These are very big risks to take and typically these are ones, which land up with insurance companies because they are 30 year sort of annuities and nobody wants to hold these 30 year annuities who are in EPC business. So therefore how the exit happens is also very important because quite a lot of it these companies are saddled with these annuity sort of assets which they don’t want to hold.

Reema: Reliance has suddenly become fashionable, your thoughts on Reliance Industries as well as other stocks that you think look attractive at current levels.

A: There is a huge disruption taking place in telecom, so therefore, that is not the sector that one should place big bets on, especially with the auction and the money that would go into buying spectrum. So, that is something that probably is best avoided. But otherwise, it is more of the same, given the state of the market, given the trading range in which the market is.

Reema: Any non-crowded trades that you would recommend because all that you have mentioned have done well and are very crowded.

A: Very crowded, no doubt about it. Non-crowded, probably capital goods, because these are the ones which have not done well, but these are the ones, which might bounce back if the economy really turns around, maybe even some fine chemical companies. This is one area where there could be some movement. They are not exactly ignored but they are relatively lower down in the valuation spectrum.