Speaking to CNBC-TV18 Pramod Gubbi, Head Of Equities at Ambit Capital, said that Donald Trump‘s recent rhetoric on H1B visas are less of an issue for the IT sector. IT sector will continue to wrestle with challenges regardless of the US president elect's negative bias towards immigrant workers, he said.

Speaking to CNBC-TV18 Pramod Gubbi, Head of Equities at Ambit Capital, said that Donald Trump’s recent rhetoric on H1B visas are less of an issue for the IT sector. IT sector will continue to wrestle with challenges regardless of the US president elect's negative bias towards immigrant workers, he said.

Long-term earnings growth for IT may be in high-single digits at best, he said.

He believes there is more room for earnings corrections. In a normal case, India has a lot going for it domestically, he said, admitting that demometisation has created a disruptive effect.

There will be some colour in the third quarter earnings in January, he said.

As regards RBI policy which kept the rates unchanged, he said it was a non-event. Although people were expecting a cut, they were cognizant of the real impact of cut will be minimal. 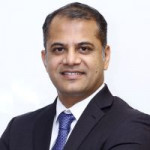 The Nifty index may be poised downward, but the movement may not be stark, he said. At the stock and sector level, movements will be much starker, he maintained. He believes there will be some correction in the consumer and financials sectors.

In financial sector, he believes that NBFCs were positioned to deliver high growth into the medium growth, but they stand most exposed now. “If you look at demonetisation NBFCs are in the eye of the storm; we see disbursements in certain segments have declined and some sectors could see asset quality coming through. There could be earnings downgrade in certain sectors.”

Below is the verbatim transcript of Pramod Gubbi’s interview to Latha Venkatesh, Anuj Singhal, and Sonia Shenoy on CNBC-TV18.

Latha: What is going wrong with the Asian markets, we have not been able to find out why they should be in the red and so much in the red some of them when actually Wall Street gave you such a handsome finish?

A: It is the same trade that we have been seeing since elections, so, it is a big rotation coming out of bonds into developed market equities now that it is fairly clear that America and some extent even Japan, is clearly on the mend as far as economic growth is concerned. So, that sort of trade I guess has a little bit more time to go once the readjustment happens.

A: Quite possible. Like I said, I think the rally has been strong enough so far in the developed world. At some stage some catalyst will have to disrupt that. You never know it could be some protectionist measure; we have been hearing about destination tax which could place falls. Along with that sort of a correction even emerging markets will have to participate and selling will restart on the back of that.

India on the other hand is a bit more complex. We have our own issues to deal with. We don’t think as of now investors have actually taken cognizance of the real impact on either the economy or the earnings forecast which will come into play I guess as the earnings season starts in January. Now, that the volumes are low, I guess it is very difficult to anticipate any major moves. On the back of that, we will perhaps play along with the rest of the emerging market pack.

Sonia: What about the space that is getting hit the hardest these days, the IT sector? So, far we have got only negative comments from Donald Trump with regards to foreign workers. Would that spook you a bit and is this a sector that you would stay away from?

A: I think Trump’s comments are perhaps less of an issue for the sector. The sector has been dealing with more fundamental existential issues over the last two years and that is likely to continue unless and until we see a major change in their capabilities in dealing with the new world; the new way the IT services are procured by CIOs and now increasingly by CMOs.

That is unlikely to change because until and unless we see proof of that, long-term earnings growth and topline growth for the Indian IT sector will be limited to high single digits at best. Given that, whatever little correction we have seen, still seems not enough. So, the Trump policy aside, Indian IT sector has more challenges to deal with and that will remain the focus.

Latha: How does India stack up within emerging markets? I take your overall short EM, long DM trade but within EMs will we be outperformers, underperformers given the demonetisation theme?

A: I think in the normal case, we should have been much more stronger as an emerging market given we have a lot going on for us domestically with little reliance on global trade or global protectionism issues. However, we are not an exporter anyways. However, demonetisation has sort of disrupted that whole positioning as relatively better market within emerging markets.

We will have to go through a proper round of earnings correction and given how markets were pricing in or rather given earnings growth was pretty high in terms of forecast and that was factored into multiples, any sort of correction in those earnings forecast will result in a double whammy of both the P/E multiple correcting and the earnings being downgraded. So, that sort of correction we haven’t really seen. My sense is perhaps if we get some color as companies report in the first quarter or rather in Q3 earnings in January, that will continue for a couple of quarters.

Anuj: Since you have a lot of FII clients, I wanted your thoughts on what has been the feedback on the Reserve Bank of India (RBI) monetary policy where most people were expecting a cut and we had a pause and a bit of a hawkish tone. So, what is the client feedback?

A: It has been a little bit of a non-event as far as clients are concerned. I think they did expect a cut, it didn’t come through, but in any case people were cognizant of the fact that the real impact of a cut would be minimal given the liquidity already in the system and also there are perhaps larger issues to deal with. So, most FIIs or most investors in general haven’t really battered an eyelid on the back of RBI decision.

A: Tough to see. The index movement may not be that stark but the direction clearly in my view is downwards. However, at the stock and sector level, my sense is that the movements would be much more stark given we have certain sectors, particularly consumer and financials, which have had a great run. We have seen a bit of correction but looking at earnings forecast as of now, there is a long way to go.

There is a lot more correction in these sectors, particularly those who were priced for long term sustainable growth, high growth. As we wind down some of the near term forecast for them, we will see more steeper correction. However, you have certain other sectors which perhaps are rather well positioned for the global stimulus in the developed world such as metals, commodities in general; they might just hold up the index somewhat.

So, to that extent, the index movement, whilst clearly is poised downward may not be that stark but at the sector and stock level, you will see sharp downward movements.

Latha: Which leg of the financial sector are you more worried about or you see all of them receding?

A: I think clearly NBFCs, they have had a great run and they were positioned to deliver high growth at least into the medium term, if not the long term and valuations there had been fairly punchy most of them trading above 2-2.5 times price to book, sometimes 3-4 times. Now, if you look at the impact of demonetisation, perhaps this sector is in the eye of the storm. Impact could be in the form of slowing growth, we are already seeing disbursements coming off, disbursements in certain sectors that actually declined over the last few weeks.

Some of these sectors could also see asset quality issues coming through and then if you add operating leverage to it, the earnings downgrade could be fairly meaningful in those sectors. Once you see those earnings downgrade comes through, the high price to book or the price earnings multiples will also have to be adjusted downwards. So, the NBFC perhaps within financials is the most exposed to this.