On the higher side, 9,000 is the key resistance that can keep the bounce in check. There could be a possible consolidation in the next week, which can unfold in the wide range of 8,000-9,000.

The Indian market witnessed one of its worst weeks since the 2008 market crash as benchmark indices plunged more than 12 percent each while the bigger cut was seen in the BSE Small-cap index which plunged 14 percent, and the Mid-cap index fell nearly 12 percent for the week ended March 20.

Tracking global selloff, investors’ loses more than Rs 13 lakh crore in a week. The average market capitalisation of the BSE-listed companies fell from Rs 129.26 lakh crore registered on March 13, to Rs 116.09 lakh crore as on March 20.

More than 90 percent of the stocks in the S&P BSE 500 index gave negative returns. As many as 313 stocks in the BSE500 index fell 10-50 percent. This included names such as Eicher Motors, MRF, Tata Coffee, Granules India, V-Mart, Uco Bank, Godrej Properties, Can Fin Homes Titan Company and Future Lifestyle among others.

"Investors have been liquidating in favour of holding cash, with asset classes from Gold to Government bonds getting affected. FIIs have also contributed to the downtrend in Indian markets, turning net sellers to the tune of around Rs 48,000 crore in March till date," Vinod Nair, Head of Research at Geojit Financial Services told Moneycontrol.

"The unabated spread of COVID-19 and the extent of its impact continue to worry investors. The fear of a global recession turned into reality after rating agencies forecasted much lower global growth rate," he said. 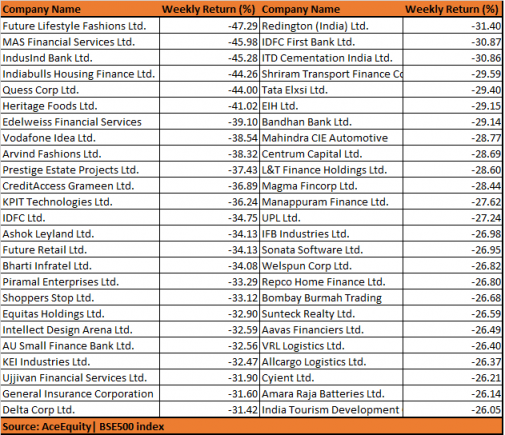 Markets across the globe witnessed massive selling which was largely triggered by the fear of a possible recession as highlighted by Morgan Stanley and other international organisation as a rising spread of COVID-19 cases across the world threaten to slow down economic activity.

Although major central banks around the world have announced several measures to cushion the economic impact of COVID-19 in their countries, ranging from rate cuts to liquidity boosters to cash in hand proposals, which so far have not been enough to calm the markets. Investors look for a cure that could help calm investors’ nerves.

Looking at the relentless fall in the equity markets, investors are looking for signs of consolidation. A steady rise on March 20 and steps taken by the Securities and Exchange Board of India (SEBI) to curb volatility are in the right direction which could curb volatility, say experts.

"When other economies resorting to ban on short sell on account of increased volatility, such a move by SEBI should provide some relief on the overall volatility witnessed in the markets and should calm in the markets in the short term," Vijay Kuppa, Co-Founder, Orowealth told Moneycontrol.

The Nifty50 rallied nearly 500 points to close above 8,700 on March 20 while the S&P BSE Sensex rose more than 1,600 points. But, both benchmark indices hit a fresh three-year low in the week gone by.

With F&O expiry due on March 26, the market is likely to remain volatile, and big short-covering rally is expected due to SEBI move, suggest experts.

Dipan Mehta at Elixir Equities also told CNBC-TV18, "It was a global practice; the SEBI has now taken this decision to control the fall in F&O as well as F&O stocks."

"Short covering is certainly possible in several stocks, but the market will react to global cues; how Europe and the US close on March 20, and how Asian markets and SGX Nifty behave on March 23 along with fundamentals," he said.

Tracking selloff in global equities, both Sensex and Nifty witnessed selling pressure on every rise or a pullback rally, and the rally on March 20 suggests that we could be entering some consolidation but, have hit a bottom? Maybe not.

"Sensex and Nifty witnessed sharp cuts in the week gone by. It was a global phenomenon that was visible across the developed and the emerging markets. Nevertheless, a bottom is not in sight yet," Gaurav Ratnaparkhi, Senior Technical Analyst, Sharekhan by BNP Paribas told Moneycontrol.

"What we can expect is a consolidation before the markets stretch further on the downside. However considering the magnitude of the fall the consolidation itself can be significantly broad," he added.

In the case of Nifty, 8,000-7,800 is a crucial support zone, which is near 78.6 percent retracement of the rally post 2016 low. "Over there the index has entered a short term consolidation mode that was needed to relieve pressure from the deeply oversold short term momentum indicators," said Ratnaparkhi.

He further added that on the higher side, "9,000 is the key resistance that can keep the bounce in check. Thus I am expecting a consolidation in the next week, which can unfold in the wide range of 8,000-9,000."