Geopolitical tensions in Ukraine have resulted in analysts talking about its impact on gold prices. Mark Keenan, Head of Commodities Research - Asia, Societe Generale continues to remain bearish on gold in the long-term. But near term, it could head to USD 1,400/oz, he says.

With mounting tensions between Russia and Ukraine, most analysts fear a rise in crude oil prices. But Mark Keenan, Head of Commodities Research - Asia, Societe Generale does not agree with the popular perception. He is not expecting an escalation in crude prices because of unrest in Ukraine.

Keenan argues the initial concerns and fears were a function of risks to crude oil moving out of the Black Sea region. But according to later research, it is in everyone’s interest - especially Russia - to ensure that crude oil continues to flow out of the region. He is infact more concerned about other commodities like natural gas where a lot of the supply out of Russia moves through Ukraine to Europe.

Though Russia is the second-largest exporter of crude after Saudi Arabia, only a small proportion of Russian exports travel through Ukraine or Crimea, he says. Russia exports 6.5 million barrels of crude a day. He says Brent crude could rise maximum by USD 5/bbl. 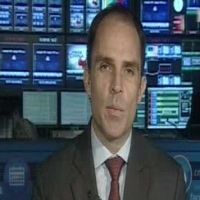 The geopolitical tension in the region has also resulted in analysts talking about its impact on gold prices. Keenan continues to remain bearish on gold in the long-term. He expects the precious metal to head lower to USD 1,050/oz by 2014-end. But near term, it could head to USD 1,400/oz, he says.

Below is the verbatim transcript of Mark Keenan's interview with Latha Venkatesh and Sonia Shenoy on CNBC-TV18.

Latha: What should we be prepared for in terms of crude prices if this aggression or state of aggression lasts for one more week?

A: I think that yesterday’s reaction to crude price specifically to brent crude was just a fight in that the prices did move around 2.5 percent higher. In our view, however, the move in crude prices has been a little bit overdone because when we examine the details of what is going on, it looks unlikely to this going to be a further price rises as a function of the tension within the Ukraine. The initial concerns and fears were a function of risks to crude oil moving out of the Black Sea region and through into the Mediterranean. About 5,500 oil tankers a year move through that channel and there was some concern that if there was an escalation in tensions that might affect these channels. Later research suggest that of course it is in everyone’s interest specifically Russia’s interest to ensure that crude oil continues to flow out of the region and our concerns are more with other commodities like for example, natural gas where a lot of the supply out of Russia moves through the Ukraine to Europe and also impacting other markets like the grain market and also the gold as you touched on.

Latha: I just wanted to know therefore what might be the impact on gas prices?

A: Gas prices already have moved around 10 percent higher in Europe looking at the UK natural gas and also grades traded in Holland and Amsterdam and because of what happened in 2006 and 2009 when Russia cut natural gas supplies into Ukraine, it is a likely channel that this maybe something that is possibly revisited going forward. If we do see that continue that may have knock-on effects within the distillate market in Europe, we may get a little bit of substitution into gasoline, which may put a little bit of tension on the crude market but that is in our view will be quickly eased by releases from for example the Strategic Petroleum Reserve (SPR) to quell any excessive price rises as a function of that.

Sonia: Just for the benefit of our viewers, can you tell us how much oil does Russia in itself produce and how much does it supply? I heard you mentioned 5,500 oil tankers a year go through that channel but how important is Russia in the scheme of things? So if there is any disruption in supply, how much would it matter?

A: Russia produces exports rather around 6.5 million barrels of oil a day. It is a second largest export in the world after Saudi Arabia and was most of the Russian exports tend to be seaborne exports. They either moved through the Baltic channels in the north and also the Black sea and Caspian channels, there is a very small proportion of Russian exports that travels through the Ukraine specifically there is a single pipeline that moves around 1 million barrels of oil a day. But if the ultimate aim here is for Russia to in some way hurt the Ukraine by cutting of energy supplies, crude oil would be the vehicle of not a good choice to do that because the crude moves straight to the Ukraine. It doesn’t touch any Ukranian refineries. So there is a very small component that goes within the Ukranian borders and most of that as I say is seaborne exports.

How serology test can help to ease the lockdown

Countries that have reported no COVID-19 cases