Agrawal rates SBI Cards as a 'deadly combination of quality and growth'.

The fast-spreading coronavirus has fuelled concerns for the global economy and India, too, is not immune from the jitters as the death toll and infected cases rise worldwide.

The new coronavirus has killed around 2,800 people and infected 80,000 people, most of them in China where the outbreak began. South Korea is the second-most affected country, with 11 deaths and more than 1,100 infections.

Indian equities joined the global fall, hitting close to February lows touched on the Budget Day, slipping more than 5 percent from its record high in January.

"The fear around and spread of coronavirus to other parts of the world is worrying. Hence, we may see some more correction in the Indian market," Raamdeo Agrawal, Joint MD and Co-Founder of Motilal Oswal Financial Services, told CNBC-TV18.

At the time of writing this copy, the Sensex had fallen more than 300 points and the Nifty was hovering around 11,700, taking the week's loss to 3 percent. 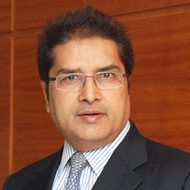 The fall in China's auto sales was a clear indication of the extent of shutdown in the world's second-largest economy, Raamdeo said.

As China is the largest consumer and supplier of several products, including auto parts, hardware, mobile equipment, chemicals, etc, a shutdown will have a major impact on other parts of the world.

Two-and-three-wheeler maker TVS Motor has already said that its February production has been hit by the virus.

While China is a major consumer of metals, oil and other commodities, the fall in their prices has some benefits for a country like India.

On a lower demand, oil prices have already corrected, with benchmark Brent crude futures trading at around $55 a barrel again.

"Commodity prices have corrected owing to a global slowdown, India could benefit from this," Agrawal said.

"Consumption is a 66 percent of GDP and leaders in the space are doing very well. The predictability of earnings and franchise remains profitable. Look at HUL, which has done very well, benefitted by low raw material prices. Even Asian Paints also benefited by low petroleum price," he said.

Agrawal also expects the life insurance sector to do well. "Credit off-take numbers are improving a little, could look up from here," he said.

In the case of SBI Cards and Payment Services' Rs 13,500-crore IPO, which will open for subscription from March 2 and March 5, he said the company could see exponential growth.

"I had the privilege to meet the management and it is a dynamic management. It has the entire back-up of the SBI network, which has more than 44 crore customers. The company has an asset-light model and growth potential, which are very long and large. It is called a lethal combination of quality and growth," he said.

"It is a tough to get a tight hold on this kind of business as getting the money is very easy but sustaining in the same business is a real test. One has to be there for at least five years to see growth in such business. Look at HDFC Bank, which has Rs 200 crore in equity with Rs 1,000 crore in market cap in 1996 and now it has Rs 6.5 lakh crore market cap," he said.

Disclaimer: The views and investment tips expressed by investment experts on moneycontrol.com are their own and not those of the website or its management. Moneycontrol.com advises users to check with certified experts before taking any investment decisions.
Moneycontrol News
Tags: #MARKET OUTLOOK #Nifty #Sensex
first published: Feb 26, 2020 11:56 am