172@29@17@247!~!172@29@0@53!~!|news|business|markets|bnp-paribas-handpicks-30-quality-largecap-midcap-and-smallcap-stocks-4681661.html!~!news|moneycontrol|com!~!|controller|infinite_scroll_article.php!~!is_mobile=false
Watch experts decode 'The rise of ESG investing' on October 29 at 4pm. Register Now!
you are here: HomeNewsBusinessMarkets

Indian markets and the economy are moving in opposite directions but the time is right for selective stock picking as earnings’ recovery is round the corner, a BNP Paribas report has said.

The Nifty and BSE-500 indices were up 11 percent in the past three months, a performance slightly better than that of other emerging markets (EMs).

The upmove may be linked to ebullient conditions globally, but India also has had its share of market-moving news, including the corporate tax cuts that drove the bulk of the upside.

“The 2QFY20 results were largely better than expectations, but the bar will move higher now with BBG consensus estimates calling for Nifty EPS growth of 11 percent in FY20 (for EPS positive cos) and 19 percent in FY21,” says the report released on November 25.

The results were aided by lower tax rates which consensus forecasts may not have adequately captured, generally helpful raw material prices, and improving bank asset quality, especially for PSBs.

BNP Paribas remains overweight on India and has placed a target of 40,500 for the Sensex by December 2019, suggesting a potential downside from the current levels.

About 17-18 Nifty stocks are trading at a premium to their historical 5-year averages on a one-year forward P/B and P/E, compared to 10-14 stocks about two months ago. But, the risk-on mode in global markets will keep Indian markets ticking.

“The biggest positive seems to be that even though global growth is slowing, accommodative central banks have kept the markets in a risk-on mode. We expect the FOMC (Federal Open Market Committee) to cut rates by a further 75bp through June 2020,” says the note.

BNP Paribas also expects another 10bp cut by the European Central Bank (ECB) before the year ends and continued QE, and easing by most Asian central banks, including Reserve Bank of India by another 25bp.

BNP Paribas model continues to favour private banks and insurance and recommends selective changes in both the lists.

The smallcap list remains unchanged. For the long term, BNP believes that it is important to back companies with proven competitive advantages and quality of earnings. 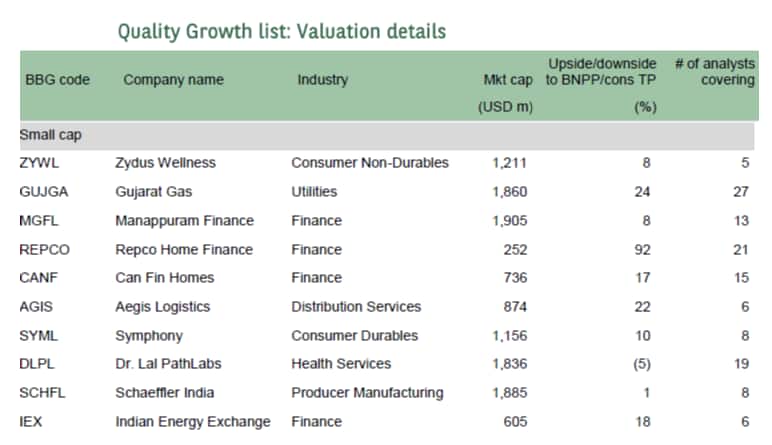