Kashmir’s brave women: They are building businesses from scratch, wanting to be employers and not ‘the employed’

This is a three-part series on women entrepreneurs, working in a difficult environment, but making a success of their venture by availing government schemes and taking help from every quarter.

Hameeda Banoo's dairy business built her family a home, and her a business that owns a milk-processing unit and three shops.

In Jammu and Kashmir, it isn’t often that women start a business. It has been something that men do. But, a new generation of women is dismantling this norm.

Many women in rural locations have started their own ventures, using the support of governmental schemes. Dr Syed Sehrish Asgar, mission director of Jammu and Kashmir Rural Livelihoods Mission (JKRLM), told Moneycontrol that more than 4.5 lakh women have joined one scheme alone, called Umeed, and nearly Rs 1,000 crore has been released to support them. Other schemes include SAATH and  Tejaswini Livelihood Scheme.

The government is working to reduce the gap in numbers of women and men entrepreneurs, said Jammu & Kashmir’s Lieutenant Governor Manoj Sinha on June 29 2021, at the launch of HAUSLA, a comprehensive programme to support women’s businesses.

Moneycontrol met three women who are part of this new wave, running enterprises from rural Kashmir, to know what inspired them and the challenges they met along the way.

Banoo’s Asli Dahi is a victory of ‘Umeed’

She trained herself, started a business, built a home for her family and helped a sibling get on his feet. Along the way, she has even managed to revive a dying tradition.

Banoo started her dairy farm in May 2019. It began with her going over to her neighbours’, to learn the dairy business. After a while, she must have impressed them with her work, because they asked her to become their business partner.

But she needed capital. That’s when she heard about the Umeed Scheme, which helps women get credit through self-help groups.

Through this scheme, the self-help groups (SHGs) receive assistance from the Jammu & Kashmir State Rural Livelihood Mission in the form of a revolving fund, community investment fund and bank linkage. Banoo got Rs 50,000 and bought her first cow.

Today she owns a milk-processing unit, which produces a range of dairy products, from milk and yoghurt to cheese. They retail in Srinagar district under the brand “Asli Dahi”--1 litre of milk for Rs 45 and a pot of yoghurt for anything between Rs 50 and Rs 60.

Banoo’s business has adopted one interesting practice, of using clay pots for packaging, instead of plastic. “It protects the quality of the product and, with this, we are reviving a dying tradition,” she told Moneycontrol. 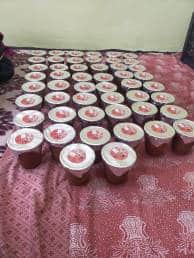 She starts at 6 a.m every day, in bone-chilling winters or in warm summers. She heads out to collect milk from other farms–her unit also processes milk products for them.

Bano has become a household name in the district and a number of women are getting inspired by her story. After all, she did build a home for her family and buy her brother a load-carrier vehicle. “My friends and neighbours now come to my unit, to learn the business,” she told Moneycontrol.

Baboo said that she couldn’t have done it without the Umeed scheme. Over time, she has got Rs 10 lakh through it, and has even built three shops.

“Please use the schemes the government has provided,” she said, as an appeal to other women in the state.

(This is part one of a three-part series. Read about a woman who started out by learning online how to make a detergent in part two, and another who gave up a career in IT to pursue baking in part three.)
Auqib Javeed is a Srinagar-based journalist, and tweets @AuqibJaveed.
Tags: #Jammu and Kashmir #Self-Help Group #Umeed scheme #women entrepreneurs
first published: Dec 28, 2021 04:55 pm