The organised traditional snacks market in India is expected to double to Rs 20,400 crore by fiscal 2026, according to Bikaji Foods, aided by rapid urbanisation, a shift towards branded products and export demand.

Bikaji Foods is the largest manufacturer of Bikaneri bhujia with an annual production of 29,380 tonnes. (Image credit: www.bikaji.com)

A few years back, chips and kurkure packets would mostly adorn aisles in grocery shops across the country but now they jostle with enticingly packed bhujia, sev and other local savouries.

The upcoming initial public offering (IPO) of Bikaji Foods has put the spotlight on the huge inroads made by traditional snacks in the organised packaged snacks segment.

A few years ago, these snacks were sold by small regional players, often loose, while organised players like Haldiram’s, Bikaji Foods, Bikano had a small share in the packaged snacks market.

“The traditional Indian snacks segment had been a fragmented market mostly sold by individual retailers and the brands in it were small,” said Devangshu Dutta, chief executive at retail-focused consultancy Third Eyesight.

However, with the introduction of packaging and processing along with the consumer preference for local taste, Indian brands have significantly picked up the pace.

According to the draft red herring prospectus (DRHP) filed by Bikaji Foods, the overall market for savoury snacks was valued at Rs 75,100 crore in FY22, in which the organised segment had a 56.3 percent share at Rs 42,300 crore. Of this, the organised ethnic or traditional snacks market was Rs 11,400 crore and expected to grow at a compounded annual growth rate (CAGR) of 16 percent to reach Rs 20,400 crore by FY26, said DRHP. This sub-segment was valued at Rs 5,700 crore in FY15. 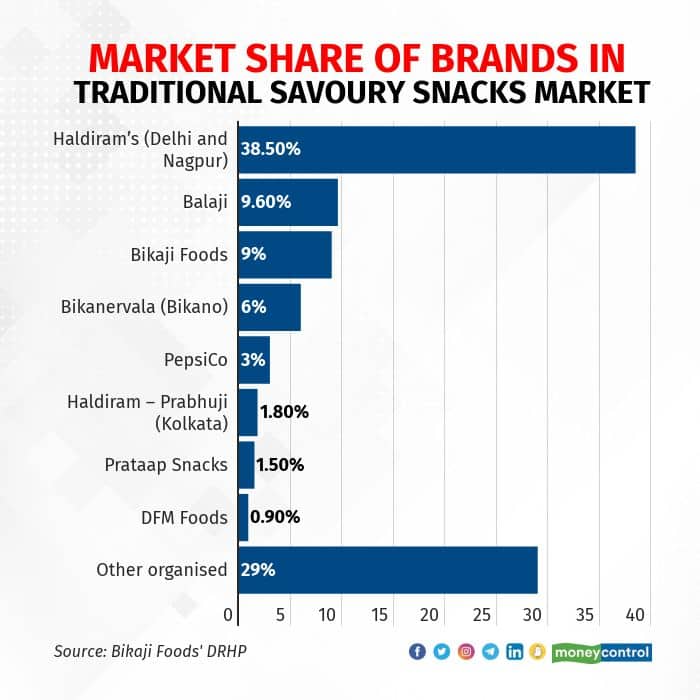 Haldiram’s (Delhi and Nagpur), as per an IPO note issued by Axis Capital, have the largest share of the traditional savoury snacks market in India at 38.5 percent, followed by Balaji at 9.6 percent, Bikaji at 9 percent, Bikanervala (Bikano) at 6 percent and PepsiCo at 3 percent. Haldiram – Prabhuji (Kolkata), Prataap Snacks, DFM Foods and other organised players have the rest of this market.

Here are a few factors that have led to the growth of traditional savoury snacks in India.

The entire market for savoury snacks, Western and traditional, has been rapidly growing, triggered by Covid-19-led restrictions in 2020 and 2021. “Snacking in between meals has always been traditional in Indian culture and Covid-19 forced lockdown has increased this habit of snacking multi-fold and is driving the growth of this industry,” said Bikaji Foods’ DRHP. The document projects the overall market for savoury snacks, which stood at Rs 75,100 crore in FY22, to reach Rs 1,22,700 crore by FY26. The DRHP added that increased concerns over health and hygiene are also pushing consumers towards the organised market and branded products will be a major beneficiary of this growth.

According to the DRHP, while traditional savoury snacks were consumed in specific regions earlier, with urbanisation and working population migration to different regions the demand for regional snacks is increasing pan-India. This has led to the domestic expansion of many regional players like Bikaji and Chitale, it added.

As stressed by Dutta of Third Eyesight, several traditional snacks were not sold in packaged form earlier but brands are launching more and more products from Indian cuisine in the packaged form now. Bikaji’s DRHP says this trend is expected to continue as companies discover processes to increase the shelf life while retaining the authentic taste of traditional food.

The shift towards branded products

Consumers who earlier used to buy traditional snacks in loose and unbranded forms are switching to branded, packaged products now. “The boom in branded or organised namkeen is driven by consumers who are upgrading from unbranded segment rather than consumers of western snacks shifting to ethnic segment,” said the DRHP.

The rise in exports

Home-grown companies such as Bikaji, Haldiram’s, Bikano have also cracked the export market over the years and their products can be found in several countries abroad. “Earlier, these products were found in stores catering to the Indian diaspora in the US, the UK, or Canada but now they have even made their way to large chains,” said Dutta. Bikaji, for instance, drew about 5 percent of its revenue from exports in FY21. The company currently exports to 35 countries.