Policy mistake, an out-of-touch chancellor and humiliation is how the British media reacted to the government’s decision on October 3 to drop the plan to cut taxes for the highest earners just 10 days after announcing it.

Chancellor of the exchequer Kwasi Kwarteng announced the decision in a tweet early in the day, saying “we get it, and we have listened”.

In a statement posted with his tweet, he said the decision to scrap the 45 percent rate of income tax had become a “distraction”.

The announcement came in on the second day of the ruling Conservative Party’s annual conference. The scrapping of the tax triggered market turmoil and led to disquiet in the party still settling down following an acrimonious exit of Boris Johnson.

The U-turn is a major embarrassment for Truss and Kwarteng. They spent days defending the chancellor’s September 23 fiscal statement, with Truss saying she was committed to the package.

Kwarteng was to say his party should “stay the course” and that the plan was “the right one” in his speech to the Tory Party’s annual conference in Birmingham on Monday but that is not how it panned out.

Here's how UK's media is reacting to the chancellor's decision: 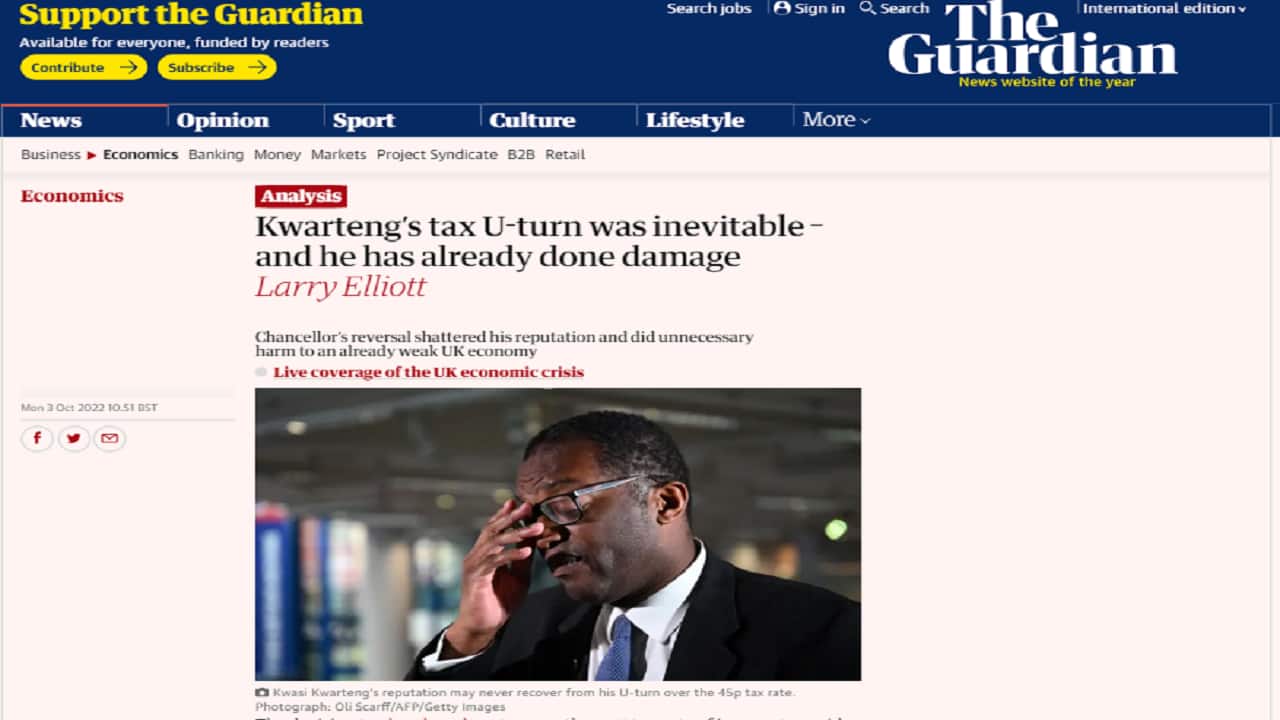 Calling the move a "policy mistake", Guardian's Larry Elliott highlighted the consequences of such a move. He also said "an already weak economy" suffered unnecessary damage due to the move. Commenting on Kwarteng's career, he said his reputation may never recover. The Mirror's reporter Dave Burke said the Chancellor was "out of touch". Citing a source, the report said Kwarteng and Truss may be ousted by the end of the year. The Telegraph wrote about the chancellor's decision to not resign despite the U-turn made by his party. Kwarteng said he had not considered resigning over the U-turn on scrapping the top rate of income tax, insisting it was a "very simple" decision to drop the policy because it had become a "huge distraction".

The editor also said "but Liz Truss will hope it creates space to move forward, hauling herself out of the political quagmire of a budgetary statement that imploded on contact with political reality".