The ministry has waived power transmission charges for 25 years for these units, allowed them to buy renewable power from exchanges or their own unit and bank unconsumed renewable power for up to 30 days with power distribution companies.

The Ministry of Power on February 17 notified the first part of the National Hydrogen Mission policy on green hydrogen and green ammonia, aimed to boost production of hydrogen and ammonia using renewable energy.

"The Mission aims to aid the government in meeting its climate targets and making India a green hydrogen hub. This will help in meeting the target of production of 5 million tonnes of Green hydrogen by 2030 and the related development of renewable energy capacity," the statement from the ministry said.

On Independence Day last year, Prime Minister Narendra Modi launched the ‘National Hydrogen Mission’ from the Red Fort with the ambition to boost the growth of green hydrogen in the country to work towards being energy independent. The ministry has launched today the first part of its national hydrogen policy.

“The implementation of this policy will provide clean fuel to the common people of the country. This will reduce dependence on fossil fuel and also reduce crude oil imports. The objective also is for our country to emerge as an export hub for green hydrogen and green ammonia,” said the statement from the ministry. 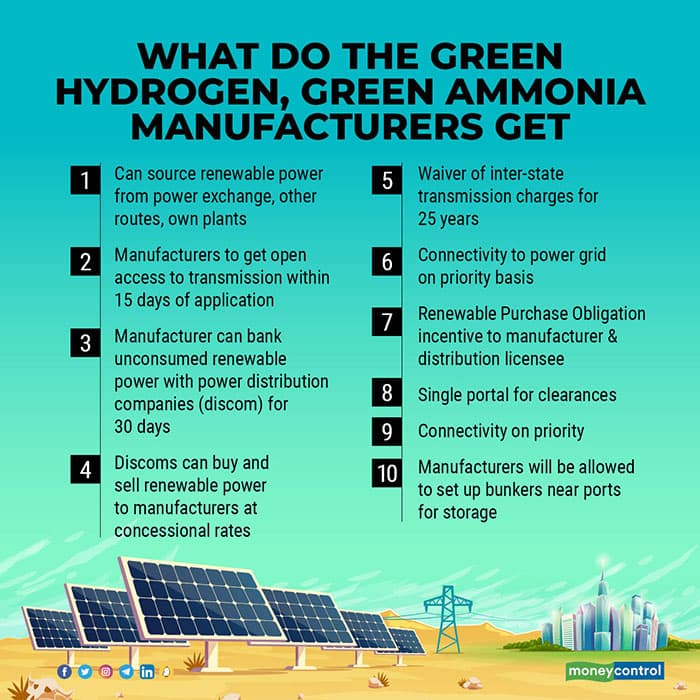 Even before the ministry announced the green hydrogen policy, private sector companies have made commitments for working on green hydrogen production. Reliance Industries, Adani group, Larsen & Toubro and Greenko have stated they will be investing in the green hydrogen supply chain. Even public sector enterprises like Indian Oil Corporation Ltd (IOCL), Bharat Petroleum Corporation (BPCL), GAIL (India) Ltd and NTPC Ltd are also keen to enter the area.

As climate change and global warming concerns worsen and countries across the world commit to reducing emission, green hydrogen has generated a lot of interest given its ability to generate large scale energy with low carbon footprint. With the recent advancements in technology, prices reducing and inching closer to be competitive as against conventional energy and government incentives, experts believe that the green energy sector will take off in the next few years.

Green hydrogen refers to the hydrogen generated from electrolysis of water when the entire process is run on renewable energy. According to the industry colour coding, the source of the electricity to generate the hydrogen molecule gives it the colour– brown hydrogen for coal, grey for natural gas and blue if methane is used.

“The policy promotes Renewable Energy (RE) generation as RE will be the basic ingredient in making green hydrogen.  This in turn will help in meeting the international commitments for clean energy,” the ministry said.

This is the first phase of the policy, which industry players said would create a favourable regulatory and enabling environment for manufacturers of green hydrogen and ammonia.

Through this, the government has addressed industry’s concerns over availability of renewable power, transmission and indicated that it will provide support across the supply chain.

“The government has tried to address some of the key demands of the industry in terms of open access, grid banking and faster approvals for green hydrogen and ammonia projects. We specifically welcome the provisions to set up bunkers near ports for the export of green ammonia. Going forward, it will be important to build upon the first phase and the government to subsequently come up with policy measures for initial demand creation by means of mandatory green hydrogen and ammonia purchase obligations and at the same time, an equivalent of PLI scheme for green ammonia to make India competitive globally,” said Manoj K Upadhyay, Founder & Chairman, ACME Group.
Rachita Prasad
Tags: #clean energy #Green Ammonia #green hydrogen #Ministry of Power #National Hydrogen Mission #open access #renewable energy
first published: Feb 17, 2022 06:43 pm