Upcoming Webinar:'COLLECTIVE FORCE: India Inc. unites to tackle the second wave of COVID-19' on June 23, 11 am. Register Now!
you are here: HomeNewsBusinessEconomy

Food Corporation of India has been the biggest recipient of off-budget financing through NSSF loans. Finance Minister Nirmala Sitharaman stated in her Budget speech that the Centre would end this practice. Their extra-budgetary nature meant these borrowings did not figure in the fiscal deficit calculation and therefore did not paint an accurate picture of the economy

One of the key announcements by Finance Minister Nirmala Sitharaman in her 2021-22 budget speech was that she would end the practice of extra-budgetary borrowing from the coming fiscal year onwards.

“In the July 2019-2020 Budget, I introduced a statement on Extra Budgetary Resources — it disclosed the borrowings of Government agencies that went towards funding schemes, and whose repayment burden was on the Government. In my 2020-2021 Budget, I enhanced the scope and coverage of the Statement, by including the loans provided by the Government to the FCI,” Sitharaman said.

“Taking a step further in this direction, I propose to discontinue the National Small Savings Fund Loan to FCI for Food Subsidy and accordingly Budget Provisions have been made in RE 2020-21 and BE 2021-22,” the Finance Minister said.

What are Extra-Budgetary Resources?

Extra-budgetary resources (EBRs) were integral, if frowned upon, part of budgets. In simpler terms, this refers to allocations made from money outside of revenue or borrowings, through means such as the National Small Savings Fund (NSSF), and fully serviced bonds like the bank recapitalisation bonds.

This was usually done to keep certain spending below the line, in a way that they would not reflect in the fiscal deficit numbers of the government. The fiscal deficit is the difference between the expenditure and revenue of a government when the former outstrips the latter.

The biggest recipient of off-budget financing through NSSF loans has been the Food Corporation of India, as the accompanying table shows. Officials say that as a result of bringing the FCI loans ‘above the line’, around Rs 1.5 lakh crore has been added to the expenditure estimates for 2021-22. 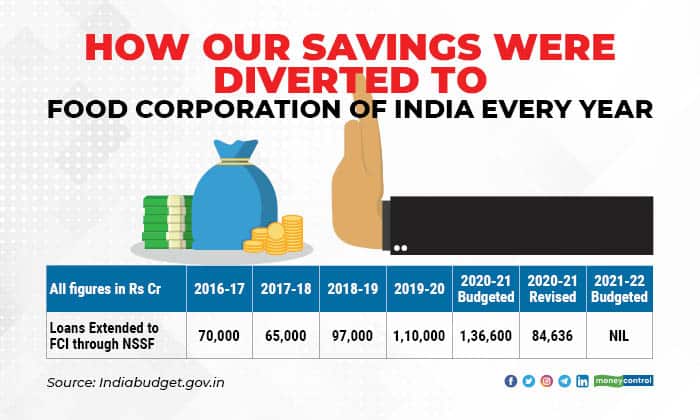 When the Federal Auditor took note of the loans

It was in 2019 that the Comptroller and Auditor General (CAG) slammed the government over off-budget financing. Examining finances from 2016-17, the CAG specifically cited FCI as an example.

“It is evident that there was an increase of about 350 percent in carried over subsidy arrears in the five years preceding 2016-17 which require financing from a number of methods including very high interest cash credit facility which increases the actual cost of this subsidy substantially,” it said.

In that same report, it informed the government that off-budget liabilities such as the raising of money by various entities, including IRFC, Power Finance Corporation and FCI, and special banking arrangements for fertiliser companies, all totalling up to Rs 3 lakh crore, should be included in the budget numbers.

Over the past two years, the centre has taken efforts to do so. For 2021-22, only the capital infusion to banks and some extra expenditure has been kept ‘below-the-line’, totalling to about Rs 30,000 crore.
Arup Roychoudhury
TAGS: #Budget 2021 #Food Corporation of India #National Small Savings Fund #Off-Budget Financing
first published: Feb 10, 2021 01:48 pm