COMMENT- The spinoff from Swachh Bharat: Wealth from waste could be big sh*t

Ever since Narendra Modi became prime minister of India, he has been advocating the setting up of toilets and promoting the concept of a Swachh Bharat.  In order to achieve these objectives, he has also urged his government to allocate adequate funds. But someone should tell him that he could earn a lot of money – both for this laudable scheme and for the entire country – if this programme were to be taken a bit further with innovative thinking.

First look at the financial constraints the government faces.  As against the demand of Rs 25,000 crore for financial year 2017-18 for Swachh Bharat Abhiyan (Grameen), an allocation of only Rs 13,948.27 crore has been made. Another Rs.6,050 crore has been made available for the National Rural Drinking Water Programme. The demand is for a great deal more. 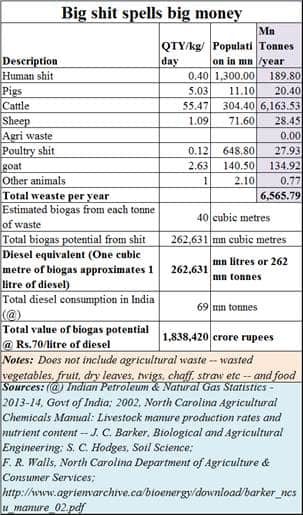 Both projects are laudable. But good ideas can cost money as well. But what if the government could earn more than 90 times the allocated funds?

Sounds far-fetched? But wait.  To understand how this could be done, people must first realise that waste means money.  It could be human excreta or animal dung.  The larger the population of people or animals, the more is the dung potential.

The fact is that dung is rich in microbial content which, if fermented, can generate humongous amounts of methane.  Methane is the same gas that is used for cooking (like LPG or liquefied petroleum gas) or when purified further as CNG (compressed natural gas) used as fuel by vehicles. What is different is only the source it comes from.  LPG and CNG come from hydro-carbons.  Methane can come from any source, including shit (here we move away from the polite words for human waste).

So how does one compute the amount of shit India produces?  Simple, each species has a corresponding volume of excreta it generates on an average.  Human being generate between 400-500 grammes of excreta daily.  Other animals produce varying volumes and much of this can be got from 2002, North Carolina Agricultural  Chemicals Manual: Livestock manure production rates and nutrient content -- J. C. Barker, Biological and Agricultural Engineering; S. C. Hodges, Soil Science; and from F. R. Walls, North Carolina Department of Agriculture & Consumer Services.

What about the population of humans and animals.   Fortunately, data on human population is easily available from the Census the government conducts every ten years.  The latest Census figures are 2011, but updated figures for the current year can be found with the World Bank and with Wikipedia.  Data on animals can be sourced from the Livestock Censuses, Department of Animal Husbandry, Dairying & Fisheries, Ministry of Agriculture, and from here. 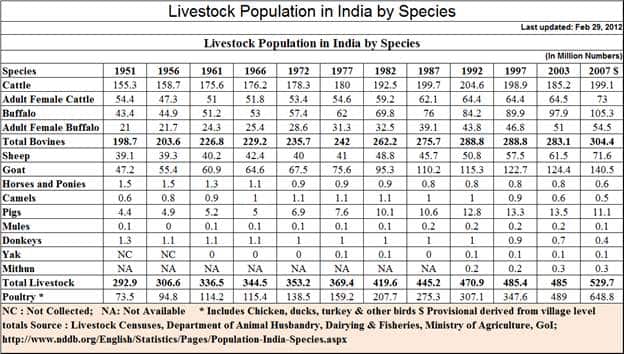 Now all that one has to do is to marry the data for excreta output and multiply it with the population figures.  That will give you the approximate volume of excreta produced daily.  Multiply this with 365 days and divide it by 1,000 and you will get tonnage output for the year.  And this is precisely what we have done (see chart).

All that is missing is to find out the approximate methane each tonne of excreta can give you.  While this would depend on the kind of digestor used, the ambient temperature – bacteria generates more methane in warmer climates than in colder areas -- and the type of catalysts used, many experts are agreed that a safe conversion norm of 40 cubic metres for each tonne of excreta would be fair.

Bundle all this data together, and voila.  You then realise that India has the potential to produce methane worth a breath-stopping Rs.18,38,420 crore annually.

Translated this would mean that India could produce methane worth Rs.18 trillion annually.

Compare this against Rs.582,762 crore that was India’s import bill for petroleum, oil and lubricants (POL) in 2016-17, and you begin to realise that India could actually wipe off its negative balance of trade and actually become surplus in foreign exchange earnings.

What is more interesting is that after the methane is extracted, the slurry can be dried, diced and packaged (with a bit of cleaning up) and sold as organic manure.  This would reduce our fertiliser import bills as well.

But there is a lot more to come.  While we have taken the value of methane from excreta, we have not considered agro waste and municipal waste.  We will not consider the latter since this includes all other kinds of waste like plastics and metal, and focus instead only on agro waste. Moreover, while there is no denying that the potential for earning from waste to energy projects in municipalities is huge, one must also reckon with the garbage mafia which tries to prevent this, as Bengaluru discovered some years ago.

All agricultural waste has the potential of being converted into methane as well.  This include rotten vegetables (like tomatoes) and fruit, grass, bagasse, stubble from plants after the harvesting is done, twigs, dry leaves and the host of other types of forest waste. Many experts say that for a country the size of India, one could easily assume that agri waste could be 3-5 times bigger (if not more) than excreta.  It is then that one wonders why the government hasn’t tried hard enough to wean the farmers from burning the stubble of their crop after harvest.  It could save Delhi the smog, and people the risk of lung infection. It could make money for the farmers and for the state as well.

So this is where a new set of figures come in (see chart). Now add up these numbers, and you begin to realise that the revenue potential and the economic benefits to India can be truly mind-blowing. In fact, there is one more issue that needs to be highlighted here. By using methane instead of firewood, coal or even diesel, the country saves on environmental pollution as well.  And by stopping the methane leaking into the atmosphere through garbage dumps, even the air becomes cleaner.  In fact, as the Economic Survey for 2016-17 points out, the health impact of fumes alone have a negative impact on the respiratory system, cardiovascular diseases neurological effects etc. This is addition to the “health impacts on the coal miners who are at a higher risk of chronic bronchitis and other lung diseases. The annual number of deaths linked to coal based power plants pollution is estimated to be around 115000 and the total monetary cost is around US$ 4.6 billion.”

Thus the imputed benefits from using methane could be several times greater than the amount shown for excreta-based solutions.

How to do this?

The answer would lie in India adopting the decentralised cluster model that these columns advocated for solar power.  We believe that approximately 100 villages on an average could easily form a cluster.  Since India has around 6 lakh villages, that would translate into 6,000 clusters.  Large towns could be treated a single clusters as the potential for solar and dung would be a lot greater.

Give the entrepreneur who has rights to providing decentralised solar power for the cluster another business opportunity.  Give him the right over methane as well. Since even the Forest Act allows for a small amount of forest land being used for generating energy, the use of this type of land too will be an added convenience.

Get each toilet and each stable to have a drain pipe that takes dung to a central pit.  Periodically, one can use pumps to move the excreta faster in much the same way that Envac of Sweden (www.envacgroup.com) does.  Since Envac does this for not more than 3 km, India will have to work out its own methods for moving garbage over longer distances.

At the central pit, get biochemists to study the composition of waste that comes in – agro waste, human and animal waste. Let them come up with the right type of catalysts that could speed up the generation of methane.

Then if the input of waste is large enough, the decentralised unit could also consider putting up a desulphonation plant.  This is because once the sulphur is removed, the bad odours also disappear, making the plant more acceptable to the community.  The sulphur can be sold, thus paying for the cost of the desulphonation plant.

When the methane is extracted, take the slurry, cleanse it of any noxious elements, and then allow the residual output to dry. Pack it up in bags to be sold at organic manure.

In fact this is already being done by small users of the ubiquitous gobar gas plants that dot the entire countryside in India. Poultry farmers in Punjab have already begun extracting methane from poultry droppings. Methanation is also promoted in a small way by companies like the truck and bus maker Scania, which has supplied villages in Karnataka with small digestors which can allow them to convert waste vegetables into methane. And it is being done in a very impressive way by Vinay Kore of Warana Cooperative in Maharashtra.

Kore is chairman of the Warana Cooperative which has substantial interests in sugarcane and milk,  He was also once the state minister for non-conventional energy.  During his tenure as a minister he met with delegations who talked about waste to energy, and he discovered that one part of the sugarcane juice that is extracted could be immensely useful for generating methane.  He knew that a major part of sugarcane juice goes towards making sugar.  A significant portion of the residual volume is molasses which go to distilleries (most Maharashtra cooperatives have interests in distilleries as well). But there is a part of this residue called spent wash (which the locals call bedmass) which is a noxious fluid and which is normally burnt.  Kore discovered that this was rich in bacterial content and could be used for generating methane.

Then with the help of consultants he began setting up one of India’s largest digestors that is capable of producing around 22,000 cubic metres of methane daily.  When asked if he would use the methane to generate electricity, he scoffed at such a suggestion.  He knows that each litre of methane would fetch him only Rs.6 if he were to use it to generate electricity.  But if he could compress and liquefy it, he could then sell the bottled methane to the restaurant and the trucking industry.  It would then fetch him upwards of Rs.45 a litre.

What Kore has done for Warana could be replicated across the country.  It needs private entrepreneurial initiative – it will wither away as a government initiative.  It needs the government to start auctioning rights to solar and to methane for each cluster.  That process could take a year.

And it needs the government to ensure that existing power grids and forest officials do not interfere with the decentralised cluster power and methane generation concept.

Should India do this, it would generate a huge amount of employment (our estimates are around 83 million for solar alone).  It would bring wealth and better health to rural areas.  It would bring them both cooking gas, solar power and a healthy environment.

What else could Swachh Bharat hope for?