Sun Pharma Q1 review: All eyes on the speciality business

We continue to like the strong domestic business of Sun and the niche that it is trying to create with speciality in the US.

Sun Pharmaceutical Industries reported a decent performance in Q1 FY19. Speciality business is the focus area and an impending opportunity, but might come with elevated near term sales expenditure and continued higher R&D spend. With a leadership position in the domestic pharmaceutical business and a challenging but exciting road ahead in the US, we see Sun as a stock to consider for core exposure in the pharma pack.

The stock has been an outperformer. Hence, valuation at 25 times FY20e earnings captures the near term positives. With an earnings compounded annual growth rate (CAGR) in mid-20s, the stock will remain a market performer and should be accumulated with a medium to long term horizon.

The company delivered excellent Q1 result that saw its topline grow 16 percent. Growth was led by strong traction in domestic formulations, emerging market as well as the US business.

Sale of Indian branded formulations grew 22 percent, partly aided by the base impact from the Goods & Services Tax (GST) in the year-ago quarter. The company is the market leader with 8.3 percent market share. In the quarter under review, it launched 16 new products in the Indian market.

The US business (excluding Taro) also saw a revival. The launch of speciality Yonsa and authorised generic for Welchol contributed to growth. The management maintained that the pricing environment remains challenging and the base business continues to face pressure. 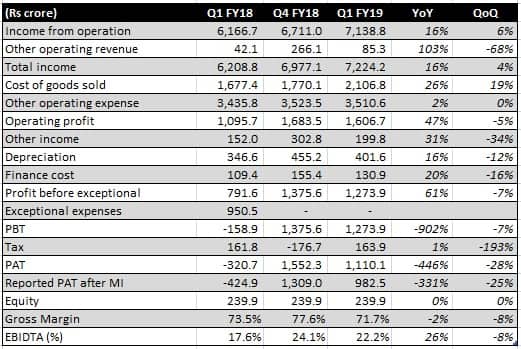 The change in the product mix resulted in gross margin erosion but the company managed to maintain a respectable operating margin of over 22 percent, despite incurring R&D cost to the tune of Rs 500 crore, or 7 percent of sales. With the management’s focus on sales as well as R&D for the specialty business, expenditure on sales and marketing as well as R&D will be higher in the coming quarters. It has guided to 8-9 percent of sales as R&D expenses.

The company has a comprehensive product offering in the US market consisting of approved Abbreviated New Drug Application (ANDAs) for 428 products and 135 ANDAs awaiting approval, including 15 tentative approvals. In Q1, three ANDAs were filed and six approvals were received. Sun has received the Establishment Inspection Report (EIR) from the US Food & Drug Administration for the Halol facility in June and expects several approvals from this facility.

For investors, the key area to watch out for is its speciality business as FY19 is going to be an important year. Sun obtained USFDA approval for oncology drug Yonsa and has recently commercialised the same. The management expects this product to be a meaningful opportunity going forward.

The company is planning to launch Ilumya in Q2. It a biologic drug administered subcutaneously to treat moderate-to-severe psoriasis. This will be fighting for its share in the $9 billion market. The management said the drug has lesser side-effects, higher efficacy and lasting effect but added that the market is competitive. Sun will be vying to garner a fair share in the market.

The other launch planned in FY19 is OTX -101 (Cequa), a formulation of cyclosporine that will allow the company to participate in the rapidly growing underserved and dynamic dry eye market. OTX-101 will be commercialised in the US by Sun Ophthalmics, the branded ophthalmics division of Sun Pharma’s wholly-owned subsidiary.

The company is awaiting approval from US FDA for two specialty products - Xelpros and Elepsia - filed from Halol. Despite Q1 being above expectation, the management maintained its FY19 guidance of low double-digit growth. The fate of the new launches could be the joker in the pack.

We continue to like the strong domestic business of Sun and the niche that it is trying to create with speciality in the US. The worst in terms of US channel consolidation is largely behind. Hence, the earnings growth trajectory should normalise and accelerate from FY20 and beyond. Long term investors should consider Sun Pharma as part of their core holding.