Be a PRO & get up to 50% off on select brands. Explore Now
you are here: HomeNewsBusinessEarnings

Looking to buy midcap IT stocks? Here’s which one to back?

NIIT Technologies exhibited robust all round performance, for Cyient it was a quarter of revival from the lows it had hit in Q1 FY19.For Mindtree, Q2 was not only soft but the management commentary was surprisingly cautious.

Three midcap IT companies declared their quarterly earnings recently. While NIIT Technologies exhibited robust all round performance, for Cyient it was a quarter of revival from the lows it had hit in Q1 FY19.For Mindtree, Q2 was not only soft but the management commentary was surprisingly cautious. So, which stock should investors be riding on?

The strong operating environment, coupled with the quick transition to new technology by many of the smaller IT companies, led to a rerating and most stocks have beaten their benchmark (BSE IT index) handsomely so far this year. The quarter gone by, however, saw divergent performance. The all-round stellar performer was NIIT Technologies. The company posted a revenue of $132.2 million and constant currency growth of 7.6 percent (3.3 percent in Q1).

The key verticals of insurance, travel and transportation and banking and financial services (BFS) grew 11.2 percent, 9.2 percent and 6.2 percent quarter-on-quarter (QoQ), respectively. With a sequential growth of 11.6 percent and year-on-year (YoY) growth of 38 percent, the digital business now has a 28 percent share in total revenue.

Deal flow in Q2 reached an all-time high of $160 million and the backlog now stands at $363 million. Growth is certainly getting more broad-based and the company appears to be widening as well as deepening relationships. The new management has completed senior hires who are now meaningfully contributing to growth. NIIT Technolgies reported a 217 basis points sequential rise in margin to 18 percent and expects further improvement from here on. The management views this double-digit growth as the new normal and expects the momentum to sustain on the back of strong outlook in its major markets. Despite the rally, we see upside in the stock, which trades at 15 times FY20 estimated earnings.

Cyient reported a much better quarterly performance compared to the soft patch seen in Q1 FY19. Overall revenue at $168.9 million showed a sequential growth of 6.5 percent in constant currency terms. The service business grew 3.5 percent in constant currency terms compared to a percentage growth in the previous quarter. Six out of its seven service segments showed a growth.

The management sounded positive on its key verticals of aerospace (barring the weakness in Q3) and communication. It also exuded confidence in energy and resources as well as semiconductor. Cyient Solutions & Systems, its JV with Bluebird Aero Systems, is on the right track and the company’s new business accelerator (NBA, wherein it contributes a percentage of sales every year) should also start contributing to earnings from FY21 onwards.

Given the steady and strong outlook and the niche that the company has in its key verticals, we feel the current valuation of 13.6 times FY20 estimated earnings offers decent upside.

Mindtree, however, failed to maintain the strong showing it had reported in the past three quarters. While a deceleration in the momentum was expected, the 2.4 percent revenue growth in constant currency terms (8.2 percent in Q1) surprised negatively. Revenue grew 2 percent sequentially in reported currency to $246.4 million.

In terms of verticals, technology, media and services grew 3.1 percent; banking, financial services and insurance (BFSI) grew 2.5 percent; and travel and hospitality by 7.8 percent QoQ. However, the disappointment came from retail, consumer packaged goods and manufacturing, where the package implementation deal ended and a few contracts that were expected fell through. Revenue from Europe consequently got negatively impacted and deal wins too were a tad soft.

Mindtree reported a 130 bps improvement in operating margin to 15.4 percent. The 60 bps challenge on account of promotion and hiring was more than offset by absence of one-off cost of 60 bps and currency gains of 130 bps.

The management said Q3 performance will be similar to Q2 but expects FY19 to end on a positive note. However, what took us by surprise was its cautious commentary on the demand environment, which is contrary to what we have been hearing from its peers. The management said the volatile environment is impacting customer sentiment and could have a bearing on budgets going forward. It also mentioned that its BFSI clients are slow in adopting digital.

While the company’s domain expertise in digital had given it a clear head start, we see growth decelerating a bit, which might reflect in its valuation going forward. The stock is currently trading at 18.8 times FY20 estimated earnings, which is expensive in our view. Hence, we advise investors to avoid the stock till clarity emerges on its growth outlook. 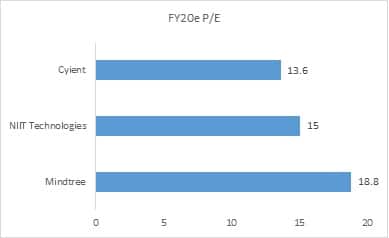