Nischal Maheshwari, Head of Research, Edelweiss Securities is positive on Allahabad Bank and OBC from the banking pack and sees them performing well in the future.

The second quarter earnings season is out of equity market’s way. It was expected that India Inc’s earnings will drive the Indian market from hereon. In an interview to CNBC-TV18 Nischal Maheshwari, Head of Research, Edelweiss Securities and Jigar Shah, CEO, Kim Eng Sec India dissected the Q2 result season and shared their best bets.

According to Maheshwari, the expectations from the earnings season gone by were not very high and there have been some disappointments hence one didn’t see much reaction happening in the market.

As far as specific stocks are concerned, he is positive on Allahabad Bank and OBC from the banking pack and sees them performing well in the future. He feels that PSU banking stocks are driven by expectations of a rate cut. However, he cautions that asset quality worries are likely to remain.

From the oil and gas space, he is bullish on ONGC at the current level. Those holding the stock should stay invested, he adds. 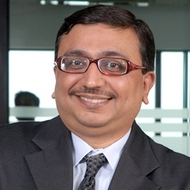 Meanwhile Shah is bullish on midcap stocks like Bharat Forge, Eros International and KPIT Technologies on good Q2 earnings. From autos, he says that two-wheeler player Bajaj Auto’s margin performance was good. He is also betting on Maruti and Ashok Leyland.

Among banks, private sector banks did well. Shah is upbeat on Federal Bank and expects its asset quality to improve. State-owned lenders like SBI and BoB also did well, he adds.

From the telecom space he prefers Idea over Bharti Airtel. He also likes Tata Communications.

Below is the verbatim transcript of Jigar Shah's and Nischal Maheshwari's interview with CNBC-TV18's Sonia Shenoy and Anuj Singhal. For the complete interview watch the accompanying videos.

Anuj: On an overall basis what is your sense. Were the earnings inline, higher than expectations or did they miss the mark?

Maheshwari: The expectation was low from this quarter. If you look at the topline, only 6 percent growth was expected, there has been some disappointment there. On Sensex basis the topline has grown only around 3 percent and on overall basis it has grown around 4.5 percent. So there has been disappointment on that front but the expectations were low and that is why you do not see much reaction happening in the market.

Sonia: From the list of midcaps that you track which are the ones that you like the most where one can put incremental money into now?

Shah: Clearly Bharat Forge numbers were outstanding. They continue to beat the analysts’ and investor expectations. The other result in midcap which I really liked and it was surprisingly good was Eros. This media company has been doing considerably well and catching attention now.

Some of the other good results I thought were of KPIT which did pretty well quarter-on-quarter (Q-o-Q) and some of the results in the automobile sector were also quite good. I thought the margin performance for Bajaj Auto was extremely good. Similarly I thought the Maruti numbers were quite good and also in banks the performance of Federal Bank was quite good. Other private banks were more or less predictable as they have been posting good results. The result of State Bank of India (SBI) was quite good and some of the other government owned banks like Bank of Baroda (BOB) also posted good numbers. So overall these were some of the stand out numbers.

Anuj: Public sector undertaking (PSU) banks have seen quite a bit of positive reaction to numbers or earnings quality. Are you as optimistic on that pack or would its time to book some profits there?

Maheshwari: Public sector undertaking banks are largely been driven by expectation of rate cut. All of them hold a large debt portfolio which is the SLR and there is where market is expecting if there is going to be increase in the value of investment and profitability will go up. But simultaneously we have to see that their pension liabilities will also go up, so we have to be careful there.

According to our calculations some of the banks - where on net basis after you are taking care of the pension liabilities - some of these banks which will do well are Allahabad Bank, Oriental Bank of Commerce (OBC). State Bank of India comes on a flattish basis, adjust for the pension liability. So some banks will do well basically on that basis. On the asset quality side I still do not see that they are out of the tunnel. Yes, possibly the bottom has been made but still the pressure is there.

Sonia: The stock of the month clearly has been Ashok Leyland. Of course today there is some profit taking that you have seen, but it has been spectacular, the move in the stock as well as the earnings, in terms of turnaround. What is the sense you are getting about whether one can invest into Ashok Leyland at this price?

Shah: We do not have a formal coverage on Ashok Leyland. But clearly in an economy which is going to turnaround soon, especially the industrial part which is going to accelerate over the next two quarters and then going into the next year when the recovery becomes more pronounced, companies like Ashok Leyland will benefit a lot. There are already signs that the demand for heavy trucks will turn around. So, Ashok Leyland seems to have done well even before that because of very strong new product launch in the last year or so. So in general I would like to remain positive on companies like Ashok Leyland and Swaraj Mazda etc who have done quite well in the recent times.

Anuj: From the broader market what earnings in particular stood for you? If you could give us 4-5 names that you thought were really spectacular and that could lead to quite a bit of rerating going forward?

Then again as I mentioned earlier in entertainment and media sector Eros did quite well and typically this is not a seasonally good quarter for them but the performance was quite good and they managed to improve the margin.

Then the other couple of good results were from Bajaj Auto where the margin performance was exceedingly good and that should further get aided in the second half as they have a better domestic sales and that of Federal Bank where we saw a clear decline in slippages and the asset quality coming under control which can further improve from here onwards. So these are some of the very interesting results I would say for the quarter.