Bitcoin managed to outperform other asset classes including gold

Bitcoin has emerged as the top rising asset class so far in 2020 returning a whopping 28.45 percent in less than a month, data shows.

It was trading near its three-month high of $9,369 at the time of publishing this copy. 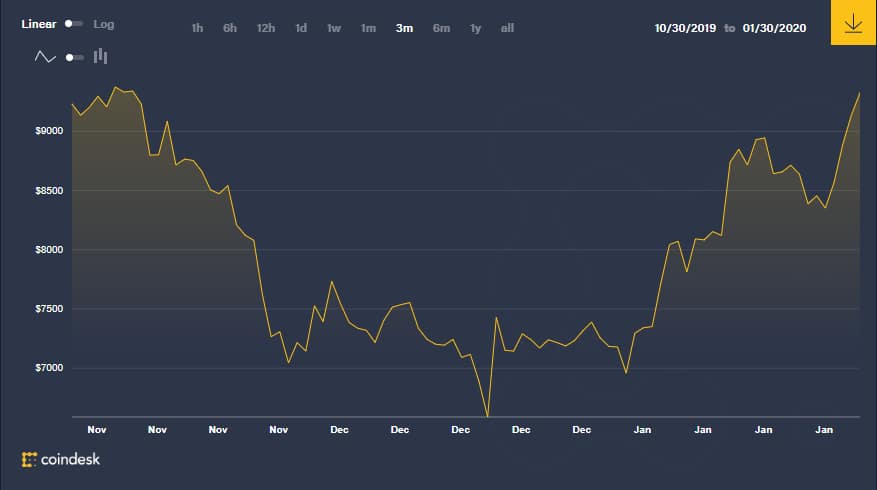 Bitcoin's price surge came on the back of several geopolitical and global events such as US-Iran tussle and the outbreak of coronavirus in China.

“Since the beginning of the new year, the two assets 60-day correlation has flipped from negative to positive. The correlation coefficient now stands at 0.21, up from a low of negative 0.15 in December, and above the trailing one-year daily average,” said a Bloomberg report.

A similar observation was made by analyst Mati Greenspan.

For those wondering about $BTC's daily correlation to other markets.

In the last 9 months bitcoin has been making a move towards acting more like gold than stocks. However the correlations are still very weak (<0.2).

A strong correlation would be >0.7. pic.twitter.com/XVw39VvzNz

Ace investor Thomas Lee, in a tweet, claimed that Bitcoin has surpassed gold in the so-called battle of the safe havens.

- Gold is up a decent 3% vs a whopping 26% for Bitcoin pic.twitter.com/GWKEfYGcut

However, financial commentator and Bitcoin sceptic Peter Schiff rebutted the safe-haven appeal of Bitcoin touting trading in the cryptocurrency as merely a game of speculation.

For now Bitcoin may be the best performing asset this year, but it has nothing to do with safe haven buying. Those buying #Bitcoin are merely speculating. Some may be speculating that others will buy it as a safe haven, but none actually are. There is nothing safe about Bitcoin!