Budget 2022: How does the government’s budget impact fiscal deficit and the value of financial assets?

Covid-19 led to a massive transformation in fiscal and monetary policies across the globe.

The reason was pretty evident–to reduce the damaging impact of the virus on growth, the economies needed artificial support and the policy making strived to provide it. We saw a coordinated monetary and fiscal action, with the government borrowing more to spend more and the central banks reducing rates to help the government borrow easily. This, however, is the outcome and not the objective.

The objective of both actions was higher growth while having prices under control. It means maintaining a fine balance. 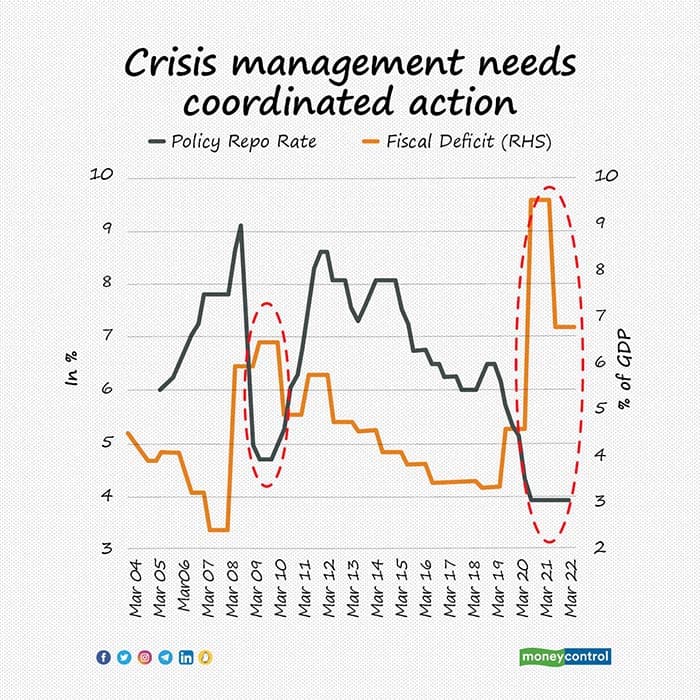 For example, if the government spends more, it will help with growth but lead to demand-driven inflation. Then, the monetary policy may need to start cutting down on money supply/liquidity by hiking rates, but this action can somewhat dampen demand. The dynamics of the IS-LM curve–which captures how production of goods moves against money supply–of classroom economics is more complex in the real world.

In times of crises, the output gap–which measures how far below the production of an economy is from its potential–widens so much that a coordinated policy action is needed to revive growth.

Ever since the Fiscal Responsibility and Budget Management (FRBM) Act of 2003, India has been trying to cap its fiscal deficit at 3%. Fiscal deficit was sustainably brought down from 5.8% in FY12 to 3.4% in FY19. However, the pandemic driven economic crises demanded fiscal support.

Therefore rightly, the deficit targets were raised by temporarily aborting the FRBM. Fiscal deficit for FY21 stood at a whopping 9.5% and that for FY22 is estimated at 6.8%. India has committed to a slow taming of the fiscal deficit.

Besides the fiscal support, India extended a friendlier monetary policy. Today, interest rates in the country stand at their lowest-ever level–4%--and for the longest ever (seven straight quarters). Pre-pandemic, interest rates in India averaged 6.8% with few volatile movements.

Currently, despite the high deficit, monetary policy continues to be accommodative since it remains growth-focused and believes inflation to peak out soon.

There are two sides to this argument. One, a higher fiscal deficit is positive for demand and output. But there’s a flipside.

If the government deficit is higher, it will have to do either of two things–a) increase tax or b) increase borrowing. Higher taxes reduce disposable income and bring down resources available for private consumption. Similarly, if the government borrows more, it leaves behind little for the private sector. Also, higher borrowing drives up interest rates and makes it more expensive for the private sector to borrow. In both ways of managing the deficit, the rise in G is compensated by fall in C. 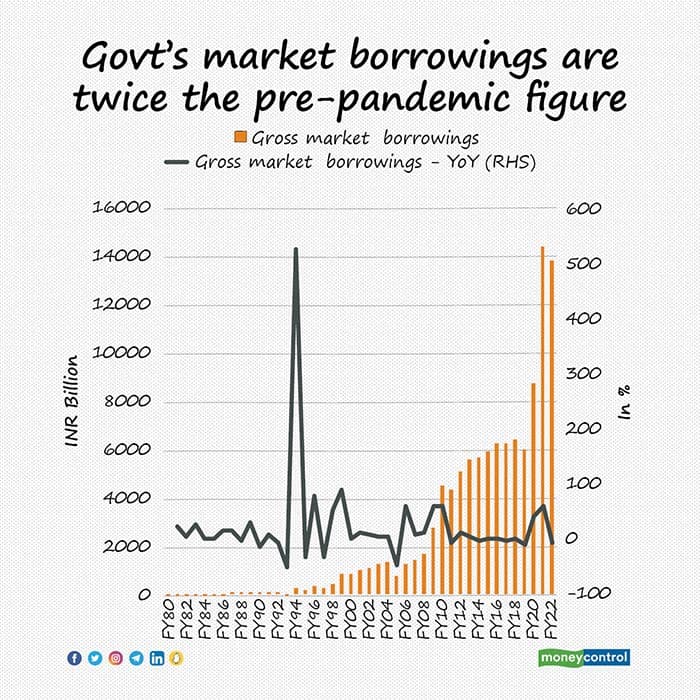 The impact of fiscal deficit on the economy cannot be known ceteris paribus–that is the effect of one factor on another when all other factors remain the same. All other factors rarely, if ever, remain the same. Fiscal deficit impacts macro variables such as inflation, interest rates, currency movement and consequent action from the monetary policy.

Considering that fiscal deficit invites monetary action to address the side-effects on several macro variables, let’s turn to what this means for our asset classes.

When it comes to impact on equity, there are two opposing factors in action. As per the discounted cash flow (DCF) model, current price is a function of expected cash flow. A high fiscal deficit raises interest rates and therefore increases the denominator of this model and hence reduces the real cash flow expectation from equity after adjusting the cost of capital( as reflected via interest rates). Again, higher future taxes will impact aggregate demand negatively. 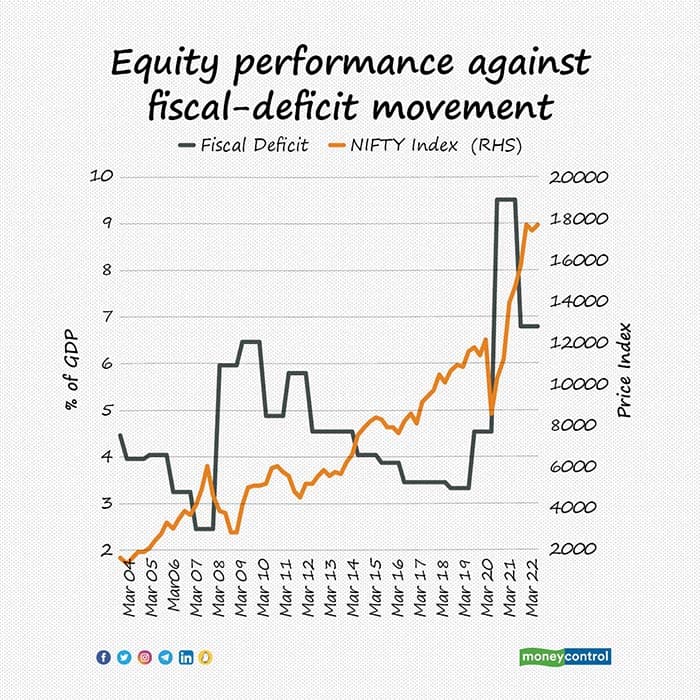 However, there’s another side to this textbook argument.

If the fiscal deficit is rising due to higher productive expenditure such as building of infrastructure, it creates jobs and employment opportunities, and therefore adds to aggregate demand and corporate earnings. Even more immediately, this kind of deficit spending will add to the revenue of sectors directly affected by infra push such as cements and building materials.

However, if the fiscal deficit is from high and unproductive expenditure–let’s say on subsidies–it can be overall bad for the markets. They do not increase corporate earnings but the higher taxes reduce the expected cash flow of companies, and hence it can have a negative impact on the market.

Above all, a high fiscal deficit can be positive in the short term but, when rates/tax go up after a lag, it could bite back with lower equity performance.

Let’s turn to a high fiscal deficit’s impact on debt.

However, here’s the catch–if the central banks step up and increase bond demand by absorbing the excess supply, bond prices necessarily do not fall. Additionally, if inflation and growth are low, central banks can cut interest rates that can increase bond prices even when the fiscal deficit is high (usually in a crisis-like scenario).

Also, a lot of it depends on movement of global asset classes. If a country is increasing fiscal deficit in isolation, it is likely to be bad for asset classes since the country stands a risk of rating downgrade, which could bring down the foreign flows into the country. However, if it is a global wave, impact will be judged on a relative basis.

Now, to a high fiscal deficit’s impact on currency. Usually, a high deficit translates into a weaker currency. 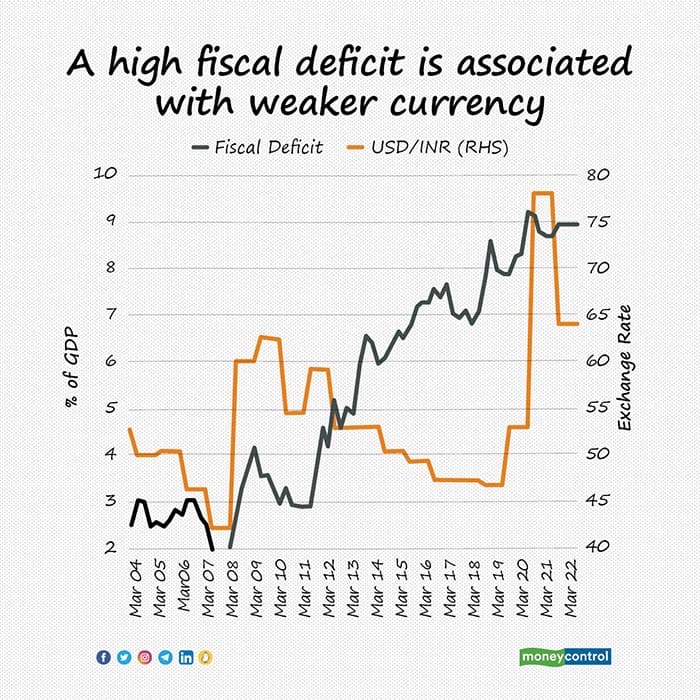 Like said earlier, a higher fiscal deficit increases the chance of rating downgrade and therefore brings down foreign flows. Fall in foreign flows makes the currency weaker. More so, a higher fiscal deficit adds extra domestic currency liquidity in the economy and therefore devalues the currency. This is positive for exports and negative for imports but, since India is a net importer, it usually has been overall negative for the current account balance.

All of the asset classes react to fiscal deficit with a lead/lag. Markets anticipate the future and act as lead indicators, reflecting expectations. But as things play out, prices move to reflect deviations from what was anticipated. Lag movements thus capture the surprise elements.

What to expect from Budget 23?

In the upcoming budget, the fiscal-deficit target is budgeted to fall from 9.5% in FY21 to 6.8% in FY22, as laid out by the Finance Minister last year. The final number could be a tad different from what was budgeted, but overall the fiscal withdrawal for the next two years is unlikely to be vastly different.

Like our monetary policy, the fiscal withdrawal is also likely to be gradual, moving towards 6% in the upcoming budget.

What would be important to watch is what is moving the fiscal deficit.

Under the revenue head, additional taxes will not be welcomed but higher and credible revenue via disinvestments, dividends and so on can be positive. Under the expenditure head, a higher capital expenditure will be preferred over non-productive heads. If the expenditure is such that it fuels the economy, then even a higher fiscal deficit will be easily accepted.

Next look at sources of borrowing. They will matter for the bond markets. A high fiscal deficit, with some part borrowed internationally, could be more acceptable compared to the entire borrowing being financed through domestic markets. This is because yields in developed markets are still low.

Also, how RBI steps up to finance the borrowing will be critical. If the central bank buys a portion of the government bonds through open-market operations (OMO), the price of bonds will not fall and yields will not go up. This would be like it happened in the US, where the Fed kept buying bonds through quantitative easing, which kept the yields low till last year.