As per Grant Thornton, Vakrangee is the 13th largest operator of ATMs in India. In rural India, it remains third largest player.

Vakrangee has emerged as a leading player in India who has been at the forefront of driving Financial and Social inclusion in the country. Vakrangee has over the years developed a unique Asset Light franchisee model which taps local rural entrepreneurs and provides them with right technology platform offering a multiple line of products and services under one roof. These rural level Franchisee outlet act as a Digital convenience store called as “Vakrangee kendra”.

Grant Thornton has done a detailed study and released a report on “Financial Inclusion and Rural India – Banking & ATM sector in India”. The report mentions that the Financial Inclusion initiatives by the government have witnessed tremendous success over the years with 35.27 million accounts opened under the Pradhan Mantri Jan Dhan Yojana (PMJDY). Approximately, 80% of the PMJDY accounts have a RuPay debit card linked with them. RuPay card’s market share increased from 0.6% in 2013 to over 50% in 2018, thereby making it the largest payment card network in the country.

As Per Grant Thornton’s report, Vakrangee has over 12,000 Banking BC touch points, of which 82% are situated in rural India. In FY’18, Vakrangee has emerged as a market leader whereby Vakrangee BCs opened 31.7% of all BSBDAs opened by all BCs in India.

Vakrangee is also the 3rd largest and fastest growing White Label ATM player in the country whereby it has added over 3,200 ATMs in the last 2 years, with focus on building capacity in Tier 5 and Tier 6 towns in India. Further, the overall Banking and ATM throughput from the Vakrangee Kendra network for FY 2019 (till 31st Dec 2019) is Rs. 21,800 crore. 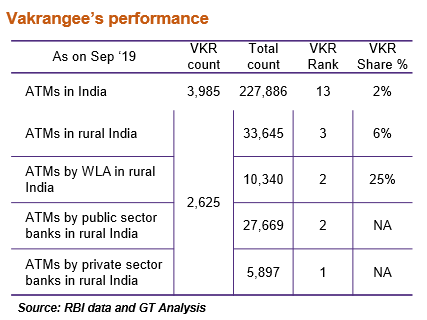 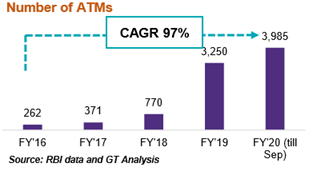 As per Grant Thornton, Vakrangee is the 13th largest operator of ATMs in India. In rural India, it remains third largest player (with only SBI and Tata Indicash ahead). When compared to private sectors banks, it ranks way over HDFC Bank (1,063 ATMs) and ICICI Bank (760 ATMs) in rural India.

WLA operators, with their innovative business models, are ideally placed to provide ATM services in rural India. Many private players are opening more and more of their white label ATMs in rural areas, like Vakrangee, BTI and Tata Indicash.

The RBI has widened the reach of financial services in far and remote areas by allowing private companies to act as Business correspondents and non-bank entities to setup white label ATMs across the country. These are examples of sustainable delivery mechanisms adopted by the government. A focused and innovative government is also supported by the private sector players in taking India to the next level of financial inclusion. Companies such as Vakrangee Ltd. have delivered service innovation by substantially strengthening their business models.

The recent report by the Nandan Nilekani committee on Deepening of Digital Payments has recommended that RBI must ensure a healthy CICO network such that all users have access to multiple ATMs / Business Correspondents within 3 KM radius for cash management needs and Business correspondents can serve customers of other bank accounts. This would be a huge positive for players like Vakrangee as they set up outlets in unserved and underserved parts of the parts of the country whereby these outlets act as a Cash in Cash out points.

Vakrangee has a clear planned target of 25,000 NextGen Vakrangee Kendra outlets by 2020 and further a long term target of 3,00,000 outlets by 2025. This vision shall have a significant impact and contribution towards the Financial, Social and Digital Inclusion initiatives in the country.