The current move to sell Air India is the Indian government's third such attempt to privatise the airline since 2000.

The central government has now entered the final leg in the sale of Air India, with a panel of ministers led by Home Minister Amit Shah expected to give their approval for the sale of the airline to Tata Sons and the Union Cabinet may meet this week to approve the same.

Here is a look at how the debt-laden Air India was privatised after two decades and five government changes: Creation, conversion to a public sector utility and first attempt at privatisation (1932-2000)

The airline was founded by J.R.D. Tata as Tata Airlines in 1932, and initial service offered a weekly airmail service between Karachi and Madras via Ahmedabad and Bombay.

The Indian government also renamed the airline Air India International and its domestic services were transferred to Indian Airlines as a part of a restructuring.

For the next 40 years, Air India was considered one of the crown jewels of the central government and controlled the majority of the domestic airline market share in India.

The Indian aviation sector opened up to private participation in 1994 after the Air Corporation Act of 1953 was repealed.

By the end of 1994-95, six private airlines had opened up including Jet Airways, Air Sahara, Modiluft, Damania Airways, NEPC Airlines, and East-West Airlines.

While Air India continued to offer premium services and controlled the majority of the country's international traffic, it started losing domestic market share to the likes of airlines like Jet Airways and Sahara Airlines, which were not offering as luxurious services but were offering affordable rates for domestic flights.

In 2000-01, the Atal Bihari Vajpayee-led National Democratic Alliance tried to sell a minority stake or 40 percent stake in Air India in order to raise funds.

In 2000-2001, the Indian government had put up 27 state-run firms for privatisation, but none of these companies was actually sold.

While Air India was considered a valuable asset at the time, its valuations and the removal of J.R.D Tata as the Chairman of the airline were seen as indicators that the government would not allow a private investor to interfere in the working of Air India.

Despite the setback on its privatisation Air India continued to rule the Indian aviation industry as the largest and airline in the country.

The onset of low-cost carriers, merger and second attempt at privatisation (2001-2017)

In 2003, India saw ushering in all the low-cost carriers in the country when Air Deccan started its services. By 2006, Kingfisher Airlines, SpiceJet, Paramount Airlines, GoAir, and IndiGo had started their operations and Air India's strategy of focussing on international flights rather than the domestic market had started to back-fire as the airline lost most of its market share in the domestic market.

Air India was also losing its market share in the international market as domestic private operators were tying up with other international airlines to offer connecting international flights at a lower price.

Airlines based out of the middle east like Eithad, Emirates, Gulf Air started tying up with domestic Indian airlines to offer cheaper flights to international destinations via Dubai and Saudi Arabia.

Both the airlines had combined debt of about Rs 5,000 crore and while private operators like Kingfisher, SpiceJet, Jet Airways and IndiGo were investing substantial capital to expand their fleet and buy newer aircraft, Air India was still using its older fleet of planes that were far less efficient than the newer planes.

Air India also started falling behind domestic and international players, which were using smaller aircraft that were more fuel-efficient, faster, and required less servicing after every flight when compared to Air India's aging fleet.

The emergence of popular stop-over-destinations like Singapore, Dubai, Riyaad, Doha, Malaysia around India also took a hit on Air India, which was had built its name by offering long-haul flights between India and the rest of the world.

Then, in 2007, the Congress-led United Progressive Alliance government decided to merge the two airlines and ordered planes worth more than Rs 50,000 crore.

Till 2010, the airline kept paying for these planes, many of which it did not even need as the Central Bureau of Investigation pointed out in 2011, from its internal resources and loans.

The airline took on heavy debt to purchase these planes while employees agitated over wage disparities. Air India never recovered from the chaos.

Furthermore, the airline agreed to new wage contracts with its staff but all this meant more distractions and more loans.

In 2011, when the airline reached a point that it could not pay salaries on time, the UPA government agreed to provide Air India about Rs 30,000 crore in equity funding, spread over a decade.

In the years to follow until 2017, the airline continued to lose domestic and international market share and with the financial burden of 111 aircraft and working capital loans, the airline’s debt ballooned from Rs 5,000 crore to Rs 50,000 crore in 10 years.

As part of its second attempt to privatise Air India, the government asked the new owner of the airline to take on a debt of Rs 33,392 crore and submit a bid by mid-May as the government wanted to complete the selling process by the end of 2018, but no private firms showed any interest in buying the debt-laden airline. 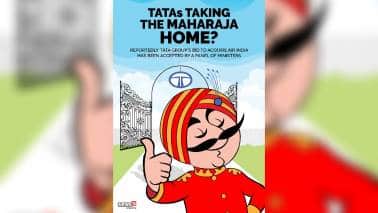 Reportedly, Tata Group’s bid to acquire Air India has been accepted by a panel of ministers. (Image: News18 Creative)

Having failed on previous occasions to sell the airline, the government decided to sell 100 percent share of the airline and in January 2020, released the EOI to invite bidders.

The onset of the COVID-19 pandemic hit the privatisation process of Air India as the aviation sector worldwide took a hit but by September 2021, the government had received two bids--one from the Tata Group and one from SpiceJet's founder Ajay Singh--to buy the airline.

While the final nod in the sale of the airline is still pending, Air India does still have some attractive assets, including prized landing and parking slots at London’s Heathrow airport and a fleet of nearly 120 planes, and the government has used this to set a reserve price of Rs 15,000 crore to sell the airline.
Yaruqhullah Khan
Tags: #Air India #Air India disinvestment #aviation #Civil Aviation #Covid-19 #Losses #merger #pandemic #privatisation #Tata Group
first published: Oct 5, 2021 05:22 pm