With the manual gearbox soon to be put to pasture, the Virtus 1.0 MT is one of the last true driver-oriented sedans out there.

Don’t get me wrong, I love the Volkswagen Virtus 1.5 TSI – the power levels, the dual-clutch automatic transmission, the lot. There’s not a whole lot about VW’s range-topping Virtus that isn’t worthy of your admiration, given how it tackles corners, how wide its power band is, and yet how comfortable it manages to be. But all of that comes at a high price, which means it’s not the most common iteration of the Virtus you’ll see on the road.

That privilege belongs to the 1.0-litre TSI MT model, which marks the entry point into the VW sedan club. Of course, the 1.0 TSI can be had with a 6-speed torque converter (which we drove recently), but that doesn’t necessarily make the manual a lesser option. Sure, the torque converter has nothing on the 7-speed dual-clutch unit, but it has become an increasingly preferred option for those locked in perpetual combat with start-stop traffic. Basically, everyone with a driver’s license.

So, what does the manual have to offer in such trying times? A lot of driver engagement as it turns out. Sure, the fact that it’s the most affordable and economical of the lot will have undoubtedly warmed you to it, but it’s the finer points of this manual gearbox that comes as an added bonus, especially if you like a spot of spirited driving – an art that will soon be extinct with the advent of dual speed transmission-equipped electric vehicles (EVs).

The 6-speed unit on the Virtus is as you’d expect any turbocharged VW manual to be. Slick, meaty throws, a hint of turbo lag, and after the 1800-2000 rpm mark, a steady surge of power made far more visceral thanks to the precision and control that the gearbox offers. 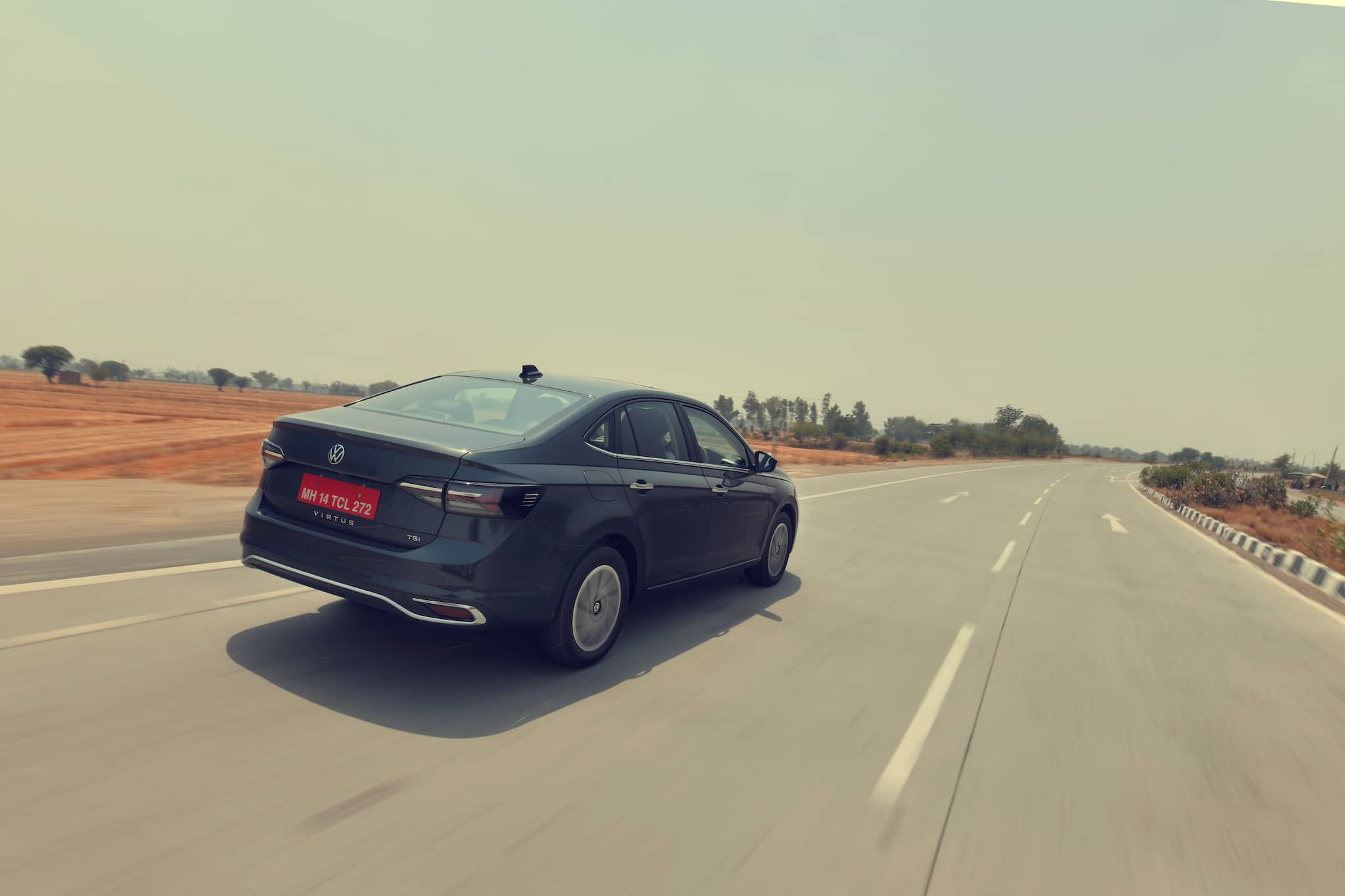 It’s becoming increasingly hard to make a case for manual units in these increasingly congested times, even after considering the price advantage. But for those who truly enjoy driving a low-slug sedan on an empty stretch of roads, moreover, those who truly wish to tap into the formidable driving prowess of the Virtus, the manual remains unbeatable.

There are few units out there that offer such surety with each throw, such precision. The clutch does have a bit of travel, but on the whole, it feels light and easy enough to operate, even in start-stop traffic. It also doesn’t cause any of those vibrations you’re bound to expect from a three-cylinder engine at crawling speeds.

The Virtus, along with its corporate sibling the Slavia, is one of the few driver-oriented sedans in the market. And short of a DSG, nothing quite livens up the driving experience like a manual, especially when it's met with the ready, zestful performance of the 1.0-litre turbo unit. Take it all the way up past 5000 rpm, and the engine emits a nice hum, most unlike a three-cylinder unit. Sure, engine noise does creep into the cabin considerably, but after having driven a host of EVs in quick succession, the sound of a 1.0-litre turbo petrol is also a welcome change.

The remaining attributes of the Virtus remain unchanged. Despite its relatively high ground clearance, this car tackles corners with incredible poise. The Virtus, like most Volkswagens, remains unshaken in the face of high speeds and feels reassuringly planted on vast highways.

This became perfectly evident, during our first encounter with the car in Amritsar, but it’s nice to be reminded of it, even as the Virtus plunges down an exit ramp, in third gear, engine singing all the way to the redline. It’s invigorating, inviting and most importantly, it’s cheap.

Think of all that you can do with the Rs 1.3 lakh that you save up by buying the manual. A Stage 2 remap? A new set of alloys? Volkswagens, particularly the Polo, has always been the recipient of some choice performance upgrades and the Virtus is likely to prove no different. It’s big on space, luxury, and road presence, and thanks to the manual, it’s big on thrills, even on congested roads.