How well do India-bound Tesla models stackup against existing luxury EVs in the country?

Will the soon-to-arrive Teslas be the best equipped EVs in the country?

The Tesla Model Y is expected to cost Rs82 lakh in India.

With the impending launch of Tesla’s Model 3 and Model Y, the EV space in India is going to get more crowded and competitive. Particularly, at the higher, non-subsidised end of the spectrum, owing to the relatively lower price of the Tesla and its growing fan base in the country. At present, the EV spectrum is occupied by the likes of Tata Motors, Mahindra, MG Motors and Hyundai at the lower and mid-level while legacy luxury carmakers like Audi, Jaguar and Mercedes-Benz have occupied the high-priced corner.

EVs continue to occupy a very small share of the market, with luxury EVs occupying an even smaller fragment. None of the brands bringing in EVs expect them to drive sales, and Tesla is likely to do the same. The strategy for carmakers is clear: establish your presence as a maker of premium electric cars, survey the market before considering local assembly. But with Tesla’s novelty value and advanced software prowess thrown into the mix, it’s interesting to see how the EV battle will play out. When it comes to Tesla’s closest competitors in India, the Model 3 and the Model Y are outmatched to a certain degree, given that the EQC, e-tron and the I-Pace are more powerful and expensive. So the task is not only to see which car is the best all-round EV in the market, but also which is the most cost-effective purchase of the lot. Tesla Model 3 has a 50-75 kWh battery and comes with a 15-inch portrait-style touchscreen. The Tesla Autopilot feature is optional.

It must be stated at the outset that in terms of outright performance, there is no clear winner. Also, EV performance can feel remarkably similar so it really depends upon the overall driving dynamics of a car for it to really make a difference on the road.

What the Teslas have working for them are over-the-air updates and a lighter kerb weight which give both the Model 3 and Model Y better acceleration than their direct competitors in India. The single motor Model 3 is obviously the least powerful model here, while also being the most affordable. However, kit it out fully and you get the dual-motor ‘Performance’ version which hits 100 kph in a supercar-shaming 3.5 seconds. Expect the “Performance” mode to cost above Rs 80 lakh, if it’s made available in India. Outside of that, it’s the Jaguar I-Pace that’s the best performer.

It’s unclear if Tesla’s famed Autopilot system will be brought to India. Even if it is, the system relies primarily on cameras rather than radar, and so, relies on clearly marked road surfaces, and the assumption that other drivers on the road will clearly obey traffic laws.

When unimpeded by such concerns, the system gets lane-change assist, active, adaptive, traffic-reading cruise control and can manoeuvre its way out of traffic, parallel-park, etc., all by itself.

Theoretically, that puts it leagues ahead of what the competition offers, which is actually not a great deal apart from solid build quality, noise insulation and refinement. All of these aspects give Tesla a considerable edge.

Save for the ‘Standard Plus’ variant, all the cars mentioned here are equipped with AWD capabilities, although it’s Audi’s e-Quattro that offers the best traction. Yes, Tesla’s dual motor setup and relatively lower weight allows for a quicker acceleration time, but it’s the Audi’s torque-vectoring coupled with its relatively higher ground clearance of 172mm that makes it the most practical on Indian roads. The Audi also has 660 litres of boot space. The Audi e-tron 55 quattro: Endurance test. Audi’s torque vectoring coupled with its relatively high ground clearance of 172mm makes it the most practical among the current set of luxury electric vehicles on Indian roads.

Then there’s the Jaguar I-Pace which has a bit of everything – adaptive air suspension, ground clearance of 174mm and torque vectoring by braking. The adjustable ride-height allows it to switch character with the sort of ease its competitors cannot manage. That, coupled with its ferocious acceleration and 577 litres of storage space (front and rear) make it the best all-rounder on this list. With adaptive air suspension, 174mm ground clearance, torque vectoring by braking and 577-litre storage, the Jaguar I-Pace has a bit of everything.

Tesla hasn’t revealed storage space with the seats up so the Model Y’s storage credentials cannot be tested until it arrives in India. The Model 3 offers the least amount of storage with its 425 litres, falling 75 litres short of the Merc EQC’s storage capacity. The Merc also has relatively low ground clearance of 142mm affecting its practicality score. Mercedes-Benz EQC. Mercedes has a network of 100 fast-chargers in 48 cities across India.

EV ownership simply cannot work if an adequate home charging solution hasn’t been set up. That aside, it’s Mercedes-Benz leading the charge with an external charging network of 100 fast-chargers located across 48 cities. However, being the first brand to have launched a luxury EV in India, it has extended all of its charging facilities to be used by the likes of Audi and Jaguar. This coupled with the availability of public charging stations put all EVs on a level playing field as far as charging infrastructure is concerned.

Given that Tesla has no plans of setting up a Supercharger network across India anytime soon, it remains to be seen if the likes of Merc will extend their hospitality to Tesla – its arch-rival in the EV space. Globally, Tesla has managed to dominate the EV space in part due to its extensive EV ecosystem. Should the Supercharger network be established across the country, Tesla will have a clear edge, as the system is, at present, only compatible with Teslas and no other EV. 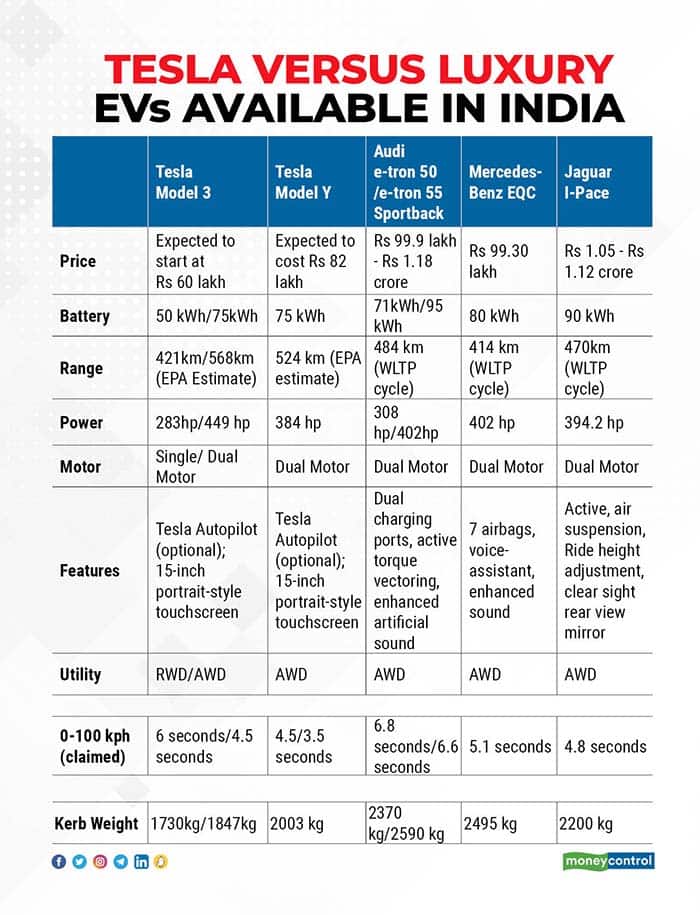