Upcoming Event:Experts and leaders discuss how modern digital tools are transforming the media industry. Register now
you are here: HomeNewsTrendsSports

Neeraj Chopra’s success partly depends on his ability to see his competitors as colleagues to learn from. He is not afraid to ask for suggestions when he feels that there is scope for improvement.

Javelin thrower Neeraj Chopra, who made India proud at the recent Tokyo Olympics by winning the country’s first gold medal in athletics, is the subject of a recent biography.

Titled Neeraj Chopra: From Panipat to the Podium (Rupa, 2022), the biography has been authored by Arjun Singh Kadian, an academic and 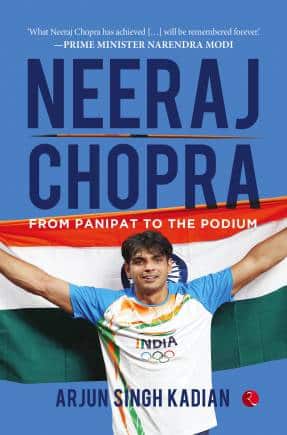 Here are eight takeaways from the book that celebrates the 24-year-old’s personal and professional life:

1. Stay connected to your roots.

Chopra grew up in a family of farmers in Khandra - a village in the Madlauda block of Panipat district in Haryana. Once he was asked about the direction his life might have taken if he had not become a javelin thrower. He said, “Kuch nahin karta ji. Gaaon mein bhainson ko dande marta.” (Nothing, just beat buffaloes with my stick in our village.) When he was training in Finland, he wrote a piece saying, “In Europe there is no dearth of variety but ghar ki roti mein jo baat hai, woh aur kahan, ji?” (The taste of home food is unparalleled).

2. Remember people who stood by you.

Stardom can go to your head if you don’t know how to handle it. Going by Kadian’s account, Chopra remains grounded amidst all the adulation. He is deeply grateful for the emotional and financial support of his family, especially his uncles, who spotted his talent and encouraged him. According to Kadian, Chopra is “not out of reach for people who have been part of his journey” and always credits seniors, mentors and friends for his achievements.

3. Value the opportunities you get.

When Chopra was 14, he joined the sports nursery at the Tau Devi Lal Sports Complex in Panchkula. Since living in the city was too expensive for Chopra, coach Naseem Ahmed assisted him with hostel accommodation. Kadian writes, “What set him apart was his desire to improve every day. Rather than wasting time loitering around, Neeraj, at that young an age, would pester seniors to watch javelin-throwing videos—even the best Olympic throws.” At Panchkula, he was able to access “imported, top-quality javelins” unavailable in Panipat.

4. Rise above your circumstances.

The absence of international javelin coaches did not deter Chopra from pushing himself to do better. Sitting in Panchkula, he made YouTube his coach. Kadian writes, “He would watch videos of star-thrower and record-holder Jan Železný and copy his technique. Neeraj would also watch javelin throwing videos in slow motion, obsessively to focus his mind.” The insatiable hunger to learn made him look for alternatives instead of wallowing in frustration.

Later, Chopra got an Australian coach named Gary Calvert. Chopra attended several camps with him in India and outside. According to Kadian, Calvert was unhappy with facilities in India but what worked in Chopra’s favour was “his non-conflicting nature.” Apparently, the athlete kept his focus on “improving his performance and staying away from politics of the federations and other stakeholders.” As a result, the Sports Authority of India, the Athletics Federation of India, his sponsor JSW Sports, and coaches “converged” to help him grow.

6. Learn from your competitors.

Kadian thinks that Chopra’s success partly depends on his ability to see his competitors as colleagues to learn from. He is not afraid to ask for suggestions when he feels that there is scope for improvement. Kadian writes, “He would ask other players, even from among his competitors, to spot mistakes in his technique.” Only someone who is humble and confident can do this. Most people are too insecure to get feedback on their flaws from competitors.

7. Pursue what is beneficial for you.

Following the trajectory of Chopra’s career, Kadian observes that “he stuck to what worked for him and quickly moved away from things that did not.” Chopra stopped training with Kashinath Naik when he had problems with the coach’s drills. This sense of discernment also came into play when he began to skip unhelpful sessions with his other coach Gurdeep Singh.

When Chopra started preparing for the Tokyo Olympics, he parted ways with Uwe Hohn who trained him for the Asian Games and the Commonwealth Games. He joined bio-mechanics expert Klaus Bartonietz. According to an Athletics Federation of India official quoted by Kadian, Chopra respected Hohn but “wanted a change when it came to the training method”. He felt that he would be unable “to handle the volume of workload” expected by Hohn.

8. Take care of your health.

In 2017, Chopra injured his groin while participating in the Diamond League championship in Zurich. He realized that incessant travel and training “got a little too much”. He could not “follow a proper diet” or “rest enough”. This made him lose focus. He decided to stay away from throwing, and went to Vijayanagar for a month of rehabilitation. Kadian writes, “The focus was to get the body in the best possible shape and increase core strength.”

The downside of being a sportsperson is frequent injuries. In 2019, Chopra underwent arthroscopic surgery on his elbow. It was painful to go without throwing for four months. He had to respect the pace at which his body healed. Recognising that impatience would worsen his mental health, “he had to remain positive”. Kadian writes, “He remembers reading books and going to malls in Mumbai during the rehabilitation phase just to keep his mind straight.”