Dr Bill Lumsden, Glenmorangie’s director of distilling and whisky creation, on the brand’s latest single malt that is “made for mixing”.

It’s not every day that the 179-year-old Glenmorangie launches a whisky that is “made for mixing". But they couldn’t have found a better person to lead them in a millennial-friendly direction than Dr Bill Lumsden, who is often described as the ‘Willy Wonka of whisky’ and the ‘mad scientist of scotch.’

Dr Lumsden, who joined Glenmorangie in 1995, is known for his pioneering work in wood management techniques and experimentation with casks of various ages.

The whiskies he has created include the Signet, a chocolate malt whisky. Last year, he released the limited edition A Tale of Cake, a whisky finished in Tokaji dessert wine casks that is meant to evoke the joy of biting into a piece of soft, fragrant cake.

Dr Lumsden has also set up Lighthouse, an experimental distillery on the Glenmorangie campus in the Highlands of Scotland in which he to hopes to do even madder things with whisky.

In an interview with Moneycontrol, Dr Lumsden spoke about making whisky more fun and democratising it, how bartenders helped him create the X, and the first time he actually mixed something with his whisky.

A fair number of whisky enthusiasts feel that a “single malt whisky made for mixing” doesn’t quite sound right, especially from Glenmorangie.

You know, it wasn't designed specifically to be mixed. It was designed to offer a more democratic whisky which people could drink neat or on the rocks, but if they wanted to mix it, they could do that as well. I expected people would maybe mix it, so I wanted to make it slightly more spicy and full-bodied. I used a technique that I employed many years ago for the old Glenmorangie 15-year-old when I finished it in new charred oak barrels, which gives these lovely spicy kind of chocolate ginger flavours. So, you know, it wasn't so much that it was made for mixing than to be more democratic, because I’m very well aware that if consumers are drinking our 18-YO or our 25-YO, they would not put anything in that, and they would have it neat. So I wanted to just offer something that people can be a little more relaxed about.

Does the X follow, in a way, from A Tale of Cake? And has its launch been influenced by millennials who are supposed to be prefer whisky over other spirits?

It follows from Cake, in the sense that we've tried to make whisky a bit more fun and a bit less severe. I approached it with a sense of fun, because sometimes master distillers in our industry take themselves very, very seriously. I know I'm a fun person, and I like to have fun. But Cake was an expensive product to make—it was also a delicious product and a special experiment. But the way in which we packaged it and promoted it, we wanted to tell people that look, you know, our whiskies are very serious and we can talk to you all day about the biochemistry behind it, if that's what you want. But in the case of the Cake, it was all about focusing on the delicious flavour. So X, then, is an extension of that, in some respects. And no, it hasn't been driven by millennials. But there's no question. We believe millennials will enjoy our product, and I'm looking forward to seeing some new cocktail ideas developed by consumers, whether they are millennials or not.

How is the X different from, say, something like a Glenmorangie 10-YO?

The only difference, really, is, that X is slightly younger than the regular 10-YO. And when I say slightly, I mean very, very slightly. The regular 10YO has been matured in American oak ex-bourbon casks, and so it has soft creamy flavours. But because I finished the whiskies in X for between one and two years in new charred oak barrels, it is slightly more full bodied than spicy, and lends itself more to being mixed and drunk in different situations.

You worked with many bartenders for the X. What kind of inputs did you get from them? 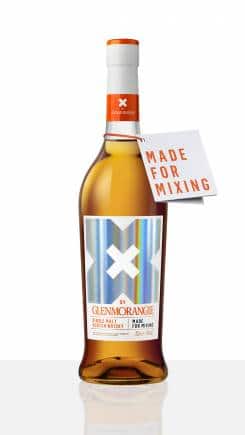 When I worked with bartenders, the ones that impressed me the most were ones who made cocktails in which you could still taste the whisky. I've had quite a lot of whisky cocktails where you're not really sure if it's actually whisky that's in there. So I deliberately made X rich and spicy so that it would be able to stand up to being mixed with a lot of different things.

What’s happening at the Lighthouse?

I can’t reveal much because it's very, very secret. But, you know, I like to experiment and create new styles of whisky. But because the demand on production at the main distillery is so high and the fact that we have traditional equipment there, there were certain experiments I simply wasn't able to do. So the Lighthouse will allow me to process different types of cereals, not just malted barley but other types of cereals as well. It will allow me to do different styles of fermentation, different fermentation profiles, and use different yeast types. And of course, it allows me to vary all sorts of elements of the distillation, including the rate of distillation, the type of reflux and things like that.

You’ve been with Glenmorangie for over 25 years. When was the first time you actually mixed something with your whisky?

I had actually mixed something with my whisky before I joined Glenmorangie—this was when I worked for Diageo. But I once went to Spain on an official trip when I joined Glenmorangie. It was one of my first public relations trips, and in Spain, I saw also all these elegantly dressed gentlemen and ladies mixing Scotch whisky with orange juice. And I thought, wow, that looks terrible. But when I came back to my laboratory, I tried it myself. And actually, it was a lot less bad than I imagined it would be. It's not necessarily the way I would choose to drink my whisky but the fact is that you could do that and still end up with something interesting. That made me think a lot more about mixing.