How will the world look like in 2030? Top trends for long-term investors

The Capital Group Companies discusses some of the most "exciting and in some cases life-changing developments" that may uncover over the next decade. Here are five ideas investors can look at for the long term

The COVID-19 pandemic has not only ravaged countries but has also brought economies to their knees. The increasing uncertainty in markets as countries suffer from more coronavirus infection waves has led to disruption in long-term investment goals.

"I know that most investors are focused on their long-term goals, like funding their retirement and their children's education," said Rob Lovelace, vice chairman and president, The Capital Group Companies, Inc. "And yet it's rare to see investment perspective that considers anything beyond the next year or two."

The financial firm discusses some of the most "exciting and in some cases life-changing developments" that may uncover over the next decade. Here are five ideas investors can look at for the long-term:

According to Rich Wolf, an equity portfolio manager, we are already experiencing a massive wave of innovation across the health care sector that will drive new opportunity for companies, potentially reduce overall costs and, most importantly, improve outcomes for patients.

"Breakthroughs in diagnostics may lead to earlier detection of illnesses, or in some cases treat disease before it progresses. Genetic testing equipment maker Illumina and research and manufacturing company Thermo Fisher Scientific are providing services to a host of drug developers," he added.

Wolf predicts a 29 percent annual growth in revenue for remote patient monitoring devices including Post-hospital care, chronic illnesses, diabetes and heart diseases. He further predicted the $866 million industry to grow to $2.4 billion by 2024. [Image: World Capital Fund: The World in 2030]A cure for cancer may be around the corner

Cheryl Frank, an equity portfolio manager with 22 years of experience and a manager for the American Mutual Fund, believes that some cancers will be functionally cured with cell therapy between now and 2030.

"We’re in a renaissance for R&D, and companies are investing aggressively to find unique ways to battle cancer and other illnesses. Therapies derived from genetic testing have the potential to extend lives and generate billions of dollars in revenue for companies that develop them," she added.

She predicts that increasing amounts of pharmaceutical innovation may come from countries like China which has the biggest population of cancer patients in the world, and it’s significantly easier to enrol those patients in clinical trials. "I believe they will begin to produce novel drugs within five to 10 years and sell them in the U.S. at one-tenth the cost," Frank says. [Image: World Capital Fund: The World in 2030]Renewable energy will power the world

According to Noriko Chen, an equity portfolio manager with 22 years of experience who serves on the Capital Group Management Committee and is a manager for EuroPacific Growth Fund, a dramatic shift towards renewable energy in the next decade is inevitable. [Image: World Capital Fund: The World in 2030]"We are in the early stages of the transition to an electrification of the grid and green energy, and there are strong tailwinds that could drive growth through 2030 and beyond," she said adding that the move is most pronounced in European utilities, including Enel in Italy, E.ON in Germany and Denmark’s Ørsted as some European governments have set high decarbonization targets.

Semiconductors will be everywhere and in everything

Steve Watson, an equity portfolio manager with 33 years of experience and a manager for New Perspective Fund, predicts the penetration of semiconductors to monitor many more aspects of our daily lives.

"Most of this will be through products we already have — phones and tablets, automobiles, entertainment systems and appliances. Wearables are becoming more sophisticated and will help us track our workouts, sleep and overall health," Watson says.

[Image: World Capital Fund: The World in 2030]"Over the next decade, I expect chipmakers to be working overtime to satisfy the robust demand for semis across industries. In my portfolios I’m interested in companies that may be misunderstood by the market but are working on transformative ideas to change daily life," he added.

According to his forecasts, Communications and Computers will lead the way for the uses of semiconductors by 2025 with a share of 34 percent and 32 percent respectively.

Cash will be but a distant memory

Jody Jonsson, an equity portfolio manager with 32 years of experience who is is president of Capital Research and Management Company and a manager for New Perspective Fund, the pandemic has visibly accelerated the use of digital payments around the world, including places where they weren’t being used as a function of daily life. 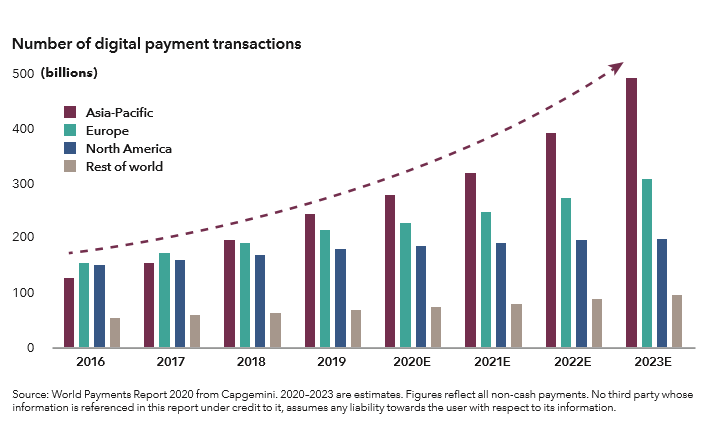