With six weeks to go for Durga Puja, the Kumartuli potters are hoping for a miracle

Just the creative industries that crop up around Durga Puja festivities are worth Rs 32,377 crore, according to a recent report.

Orders for big idols, priced at Rs 15-18 lakh each, have dried up amid fears of a third wave of Covid-19 and event cancellations.

Kolkata: In rain-drenched Kumartuli - Kolkata’s historic potter’s district on the banks of the Hooghly river - artisans are worried. Orders for Durga Puja idols are down to a trickle, and the inventory from Bengali New Year Poila Baisakh (on April 15 this year) is still largely unsold.

“Where are the orders? There are just no orders,” says Sujit Pal, a senior member of the Kumartuli Mritsilpa Sanskrity Samity. In 2019, orders hovered around 4,000-5,000 idols. Now, there are barely 100-150 orders across the 100 potters' studios in the area.

Until 2019, the Rs50,000-crore Puja economy was booming, and big orders would start pouring in around March. Now, with Durga Puja - arguably the biggest annual festival in West Bengal - just six weeks away (October 11-15, 2021), preparations are uncharacteristically subdued.

This year, fears of a third wave of Covid-19 and event cancellations are dampening idol-buying sentiment. No one seems to want big idols, priced at Rs 15-18 lakh. Worse, many buyers are showing a preference for fibreglass idols that can be used for at least five years instead of the clay ones that are replaced annually.

“This year, there are loads of cancellations. The big organisers are holding back their orders. It is a Catch-22 situation. For the economy to boom, Durga Puja festivities must be allowed to happen. And if that happens, there are high chances of a Covid-19 third-wave impacting the state,” says Kaushik Ghosh, an artist.

Ghosh says that he and a handful of artisans are currently shipping fibreglass idols to Australia, Europe and the United States.

Kumartuli Mritsilpa Sanskrity Samity's Pal says that what the artisans are producing now is standard fare. “Days of experimentation - innovative models of Durga - are all but over,” he adds.

Preparations for Durga Puja typically start around March. However, this year, the Covid-19 pandemic held up the schedule in Kumartuli. Obviously, losses started mounting. Idols of household deities like Goddess Annapurna remained unsold during the Bengali New Year (Poila Baisakh). Kumartuli produced about 100 idols but sold just 20, the entire investment was lost. Now, orders for Durga idols are not coming as expected.

“We have started making smaller idols. We have no option but to wait,” says Mrityunjay Mitra, a veteran artist. Some have shifted to making clay idols of rich merchants or Greek goddesses. Some have started collaborating with art colleges outside Bengal to make clay models for the institutes.

Some historical accounts link the rise of Kumartuli to the 1757 Battle of Plassey and the East India Company. It was the East India Company which allotted separate districts to people based on their profession: Suriparah, den of wine sellers; Aheeritollah, cowherd’s quarters; and Coomartolly, potters’ quarters.

The sculptors were originally from Krishnanagar town in Nadia district. There were over 350 master sculptors two years ago but now the number has fallen to just 50-odd artisans. Once there were over 450 studios in Kumartuli but now there are just 100 studios. Fiberglass idols are produced within a week as compared to clay models which take four to five months. Clay models are heavy, and there are restrictions on their immersion. Fiberglass models can be used year after year.

There are other problems. Banks do not offer loans to the sculptors; clay modelling is not seen as a profitable business any more. Now, the sculptors have to invest around Rs 10-15 lakh, and the amount is locked in for eight months (March-October). In short, the sculptors have just four months to earn and survive the whole year. It is not easy - a six feet statue sells for Rs 30,000. The ones over 10 feet go for Rs 2-10 lakh. But the big orders are not coming now.

But this is just one side of the story. The five-day festivities have always been a trigger for economic growth. Since last year, though, everything has slowed down.

Once, thousands of clubs, neighborhood associations and wealthy families across West Bengal constructed themed pandals and competed for awards - the best idols and pandals would receive corporate sponsorships and awards. The festival, which marks the goddess Durga’s descent to earth with her children, was a huge economic turner for millions of people in Bengal and across India. Shopping malls offered discounts for everything from a pair of jeans to a double door refrigerator. Restaurants did brisk business, people travelled to Bengal and other parts of India, part-time workers did overtime, companies offered bonuses with salaries. An estimated 25,000 drummers travelled across Bengal and to other parts of India. An artisan draping a sari around an idol of Hindu goddess Durga at a pandal, ahead of the Durga Puja 2017 festival in Kolkata. (Photo: Rupak De Chowdhuri/Reuters)

Now, things are more or less on standstill. Majority of the drummers have not been commissioned to perform - in Bengal or outside the state. Makers of ornaments for the deities in Nadia and Hooghly districts have very little work. Those involved in manufacturing artificial hair for the idols have seen their business dwindle. Same is the case for those who bring mud for the clay from South 24 Parganas.

“It is a strange wait and watch scenario. As of now, the state government has allowed gatherings of up to 150 people. But during the Durga Puja festivities, the crowds come in hordes, in hundreds of thousands. No one knows if permission will be granted,” says Dipanjan Roy, a corporate honcho.

There are approximately 400 big structures constructed every year to house the idols. In addition, there are countless smaller constructions. “Pujas may not be cancelled but the scale will definitely be lowered,” Roy adds.

Earlier this year, West Bengal Chief Minister Mamata Banerjee was quoted saying that the creative industries that crop up around the Durga Puja are worth Rs 32,377 crore. The amount, Banerjee claimed, was comparable to the GDP of the Maldives and around 2.5% of the GDP of West Bengal. Banerjee cited a 2018 report that the state government had commissioned to find out the economic impact of Durga Puja. The study was conducted by experts from the British Council, IIT Kharagpur, and Queen Mary University in the UK. The researchers used the same methodology that is used to track the Edinburgh and Rio festivals.

Central to the Durga Puja festivities are the idols made in Kumartuli which, experts say, is a unique repository of traditional cultural knowledge. 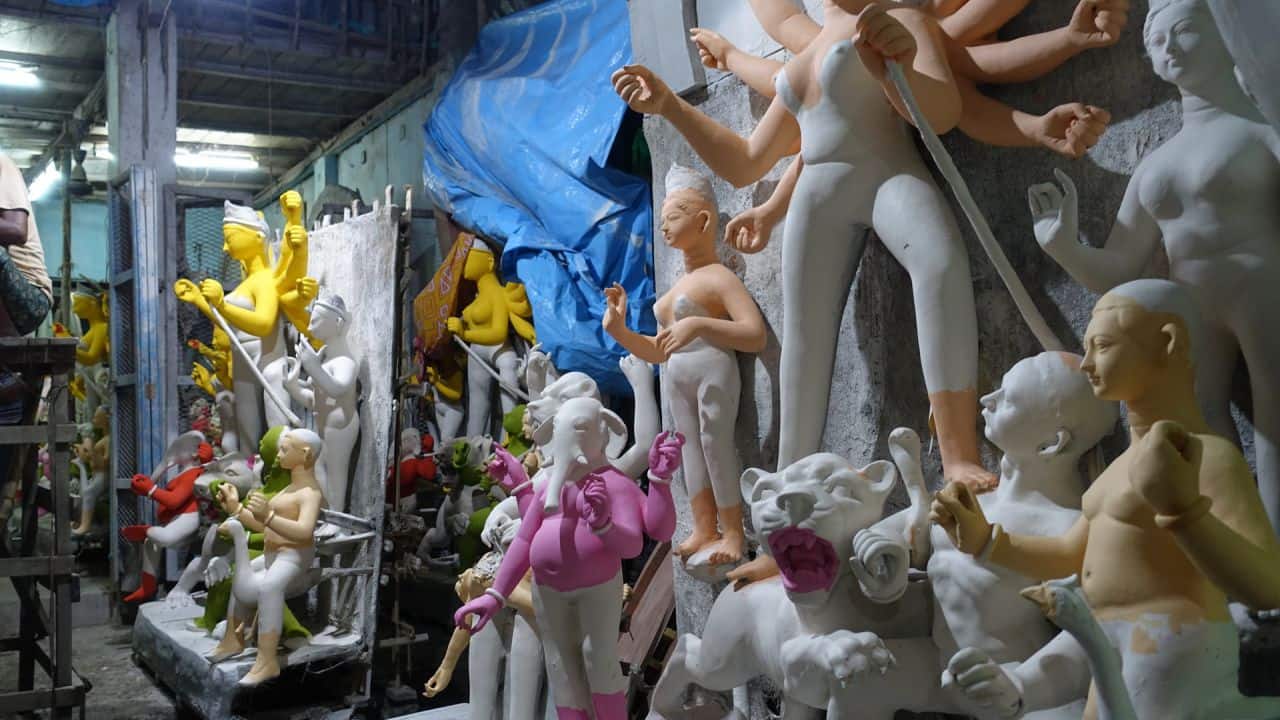 One of the 100-odd potters' studios left in Kumartuli, Kolkata, today.

Durga Puja is one of India’s biggest festivals. Last year, it was nominated by the Indian government for the UNESCO Intangible Cultural Heritage (ICH) status for 2020.

Kumartuli artisans, who have always felt their traditional craft is unique, have been seeking top recognition for their work, like a GI tag. There is precedent: Purulia’s Chau dance form, Bankura Panchmura terracotta craft, Dokra and Patachitra paintings have got the GI tag.

Yet Kumartuli artisans often have to do odd jobs to sustain themselves. “Their work has suffered immensely for the last two years. Of course there is uncertainty with their profession but this is a strange situation,” says Sujit Bose, Bengal’s fire and emergency minister and a top Durga Puja organiser.

Bose says in the run-up to the festival, hundreds of artisans toil in workshops without proper ventilation or lighting to complete the idols of Durga and her children. “But they are living in uncertainty because the big announcement about the Puja has not yet happened. Décor, artwork and illumination and the big Puja ecosystem of supporting crafts has really not taken off. The demand for Kumartuli idols within India and in the overseas markets has also slowed down,” Bose adds.

Bose says Bengal’s puja economy has changed with India’s economic liberalisation. Corporate funding and outdoor advertising makes up for 90% of the funding, and expands the scope of businesses and triggers purchasing patterns throughout the state.

Economists say unlike the annual Oktoberfest or the Rio Carnival that mainly depend on visitors from all over the world, the Puja economy in Bengal is mostly self-sustained. Shopping for a host of things like apparel, shoes, electronic gadgets, idols, pandals, and tourism, all contribute to the economy. Community worship contributes about 15% to the economy, about 10% is spent in hopping from one pandal to the other to watch the idols, inbound and outbound travel contribute about a quarter, and the remaining half of the Puja economy is Puja marketing.

At a big departmental store in Gariahat, one of Kolkata’s most congested markets, fresh arrivals have not come, the store has stocked old electronic products from 2020. “We hardly had any sales last year, we are not expecting any bumper sales this year,” says a sales executive.

She says there is fear around the big puja clearance sale because it will invariably bring in the crowds, not a good sign when the third wave of Covid-19 is already anticipated in India. “The big puja economy can grow only if business moves, and for that, the crowds need to come to the stores and give us the orders. People are coming out of their homes but are very, very cautious. It is a good thing to keep Covid-19 in check but bad for the economy. We are also waiting for some big announcement to happen,” the executive adds.

The state’s big gastronomical experience which generates great sales is also on hold. Kaushik Ray, who owns a chain of restaurants in the city, is not expecting a full house during the festive season. “Many are ordering online, where food is offered at a great deal of discount. Eating out halted last year and the restaurants have just opened up. It will take a minimum of five to six months. That means we will miss our date with Puja,” Ray says.

He adds that as a direct result of the shrinking economy, millions of job losses and reduction in income and the fear of contagion, the Puja economy is bound to be curtailed. “The economy will not grow if the Pujas - big and small - are out of bound for the visitors.”