Littering is our birthright. So, it is no surprise that landfills have been going up in flames!

Our waste disposal system is more a casual DIY than a systematic, organised one. (Representational image: Gary Chan via Unsplash)

If India had a national smell, what would it be? Garbage kind of comes to mind.

This is a country where the waste disposal system is more a casual DIY than a systematic, organised one. We throw away refuse wherever and whenever we want – mostly over a neighbour’s wall. Out of moving cars empty snack packets come flying; there are more plastic bottles at our feet than waves at a beach. Gum is stuck under chairs and crumpled paper whizzes past in classrooms. Converting personal trash into shared community property comes naturally to us.

Empty plots are considered perfect ground for dumping trash, so that within every mile there is a mountain of waste just growing higher and higher in a designated corner of the street. The first person to empty their bin there does it slyly, without meeting anyone’s eye. But once inaugurated thus, others quickly queue up with their kachra dabbas. Very soon it is a roadblock that people automatically circumvent holding their nose. Once past the site, they go back to chatting or singing.

Littering is our birthright. So, it is no surprise that landfills have been going up in flames! One caught fire in Delhi recently – the fourth to do so within a month in this city. Is this arson or an organic accident, or just summer at its peak? Perungudi near Chennai is emitting smoke too, as a landfill near a marshland here has caught fire. Fire engines and water tanks are rushing in with bells and sirens on, civic bodies are getting fined, and the heat wave is being blamed squarely.

Somehow, we manage to go through life blithely without once wondering what our trash is up to. We may frown lightly if we see someone in the act of chucking waste, but when it is our turn to upturn bins, we ignore any audience. We frantically set up expensive water filters at home to drink only the cleanest water; what flows out of the tap can kill you. Perhaps this is the only country where cause of death can be oxygen. In the course of an ordinary day, we manage to breathe in a lot of polluted air, step into gutters and sewage, and choke on dust. Rarely do we dig compost pits in our backyards.

Trash does sneak into news headlines as well as a fair amount of fiction. In England a man who went missing six years ago is presumed to have fallen into a bin and crushed in a waste lorry. In Yoko Ogawa’s book Revenge, the inside of an old, abandoned fridge is where the main drama is. Wall-E: A Portrait of Earth’s Grim Future, A Plastic Ocean and Trashed are films that tackle tales of trash.

Bits of paper are picked up only in nursery rhymes; in real life, they are left lying on the floor, from where the fan or breeze blows them into far corners. Once a banana is eaten, the peel can go under anyone’s feet. 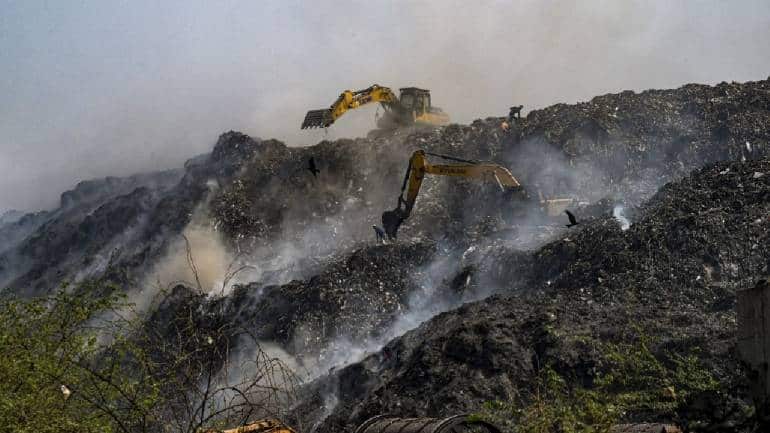 The Bhalswa landfill site in Delhi continued to burn for days in late April 2022. (Image: AFP)

Shinie Antony is a writer and editor based in Bangalore. Her books include The Girl Who Couldn't Love, Barefoot and Pregnant, Planet Polygamous, and the anthologies Why We Don’t Talk, An Unsuitable Woman, Boo. Winner of the Commonwealth Short Story Asia Prize for her story A Dog’s Death in 2003, she is the co-founder of the Bangalore Literature Festival and director of the Bengaluru Poetry Festival.
Tags: #Bhalswa landfill #Garbage disposal #Garbage dump fire #solid waste
first published: Apr 30, 2022 08:06 am