Bear Put spread is a moderately bearish strategy. The strategy is built by Buying a Put close to the current market price of the underlying and selling same expiry Put but of a strike lower than the Put bought.

There was a super-end to June expiry with a lot of gains and very few losses. It all started well and, suddenly the mid-week, a drop from the highest point of the week pushed Nifty negative territories for the week in just two sessions. Call it expiry week volatility but markets picked up leading Nifty to close the June expiry on June 25 with almost 9 percent gains for the June expiry if we consider the front month futures.

On the open Interest front, Nifty had a decent Long-Long Unwinding run for first few sessions of June expiry, however a couple of bit short sessions in the second half mixed the whole ongoing long bias. As a result, we ended up with a mix of longs and shorts to be rolled forward. There was definitely higher OI to be rolled and that too at the rate of 79 percent, almost 8 percent higher resulted in increment of almost 14% in OI expiry over expiry.

Bank Nifty on the other hand went through a cycle of Short Covering before picking up a few longs in the second half of the expiry. Here despite the higher rollovers of similar magnitude that of Nifty we lost OI for the expiry to the tune of 9 percent. Aggregate futures rollovers were 91 percent which was higher than 3 million average by almost 3 percent. There was net increment in OI also to the tune of 5 percent. Most of the stocks gained in terms of price move for the June expiry. Interestingly over 50 percent stocks lost OI to short covering. This makes the roots of the rally weak.

Slicing the stock futures data further, we figure out that this was one of the very few expiries where we had sector aggregates either adding longs or covering shorts. By far the biggest Long recipient was Oil all thanks to Reliance Industries and supported by HPCL and IOC. Private Banking also added longs just led by Axis Bank, IndusInd Bank, while the big names like ICICI Bank, HDFC Bank remained fairly quiet. PSU Banks saw short covering led by SBI and PNB, however chart toppers in short covering was Capital Goods led by BHEL, BEL and L&T.

As far as sentiments are concerned, the composition remains still favouring bulls, highest congestion still remains distant at 9000. Surprisingly and worth noting is Bank Nifty OIPCR which, despite outperformance, is trading well below neutral level.

On the risk front, with a drop of over a point this week India VIX has come down almost to the lowest point since March. This along with the fact we are trading close to intermediate high levels makes the set-up a bit risky as these have been classic situations of pull back triggers.

Finally, a mixed build-up in Nifty futures OI keeps the directional conviction low. Overwhelming proportion of short covering in stock futures in June expiry keeps the overall futures built up hollow and unreliable. OIPCR for Nifty for the week remains weak with Put writers shying away, even monthly Put writers are far too distant. Hence, lack of conviction in futures action, which along with IVs in lower extreme advocates a weekly hedge via Weekly Bear Put Spread.

Bear Put spread is a moderately bearish strategy. The strategy is built by Buying a Put close to the current market price of the underlying and selling the same expiry Put but of a strike lower than the Put bought. The sold Put strike would limit the profit but fund the put buying. Profits are limited to difference between strikes minus the net premium paid. 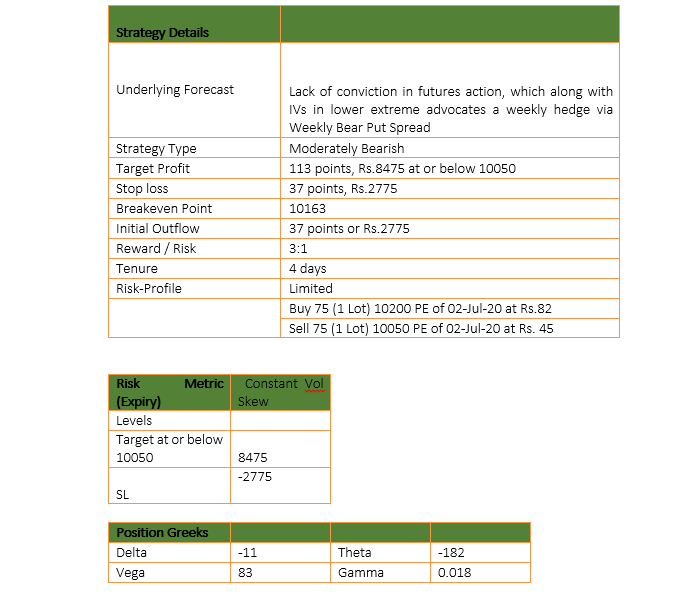 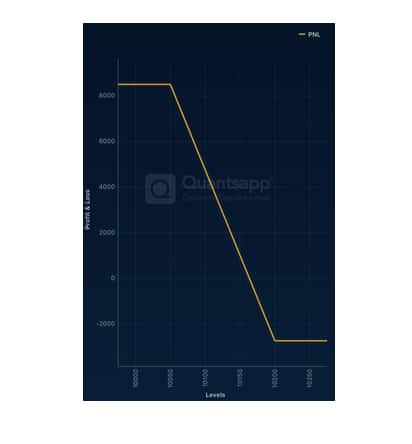