The Poco F4 GT has officially been unveiled globally. The Poco F4 GT arrives as a rebranded version of the Redmi K50 Gaming Edition that was unveiled in China earlier this year.

The Poco F4 GT is powered by a Snapdragon 8 Gen 1 chipset paired with up to 12GB of LPDDR5 RAM. The phone also comes with 128GB or 256GB of UFS 3.1 storage. The phone sports a 6.67-inch FHD+ AMOLED panel with a DisplayMate A+ rating. The screen has a 120Hz refresh rate and a 480Hz touch sampling rate.

For optics, the Poco F4 GT gets a triple-camera setup on the back with a 64 MP Sony IMX686 sensor at the helm. The other two cameras include an 8 MP ultrawide shooter with a 120-degree FoV and a 2 MP macro unit. On the front, the Poco F4 GT’s hole cutout houses a 20 MP Sony IMX596 selfie camera. 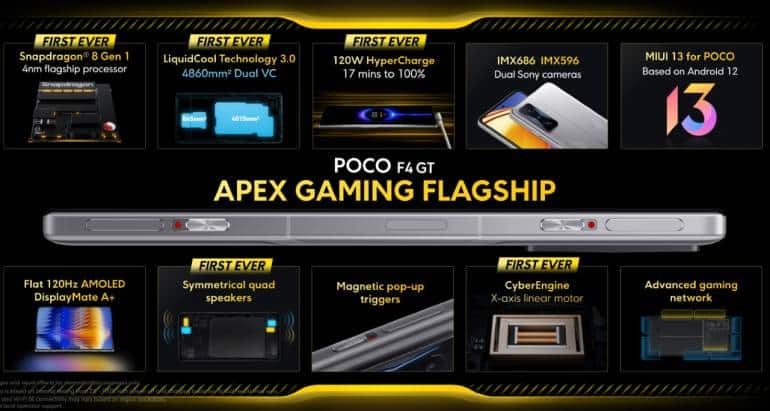 The Poco F4 GT packs a 4,700 mAh battery that supports 120W HyperCharge support, which can fully power the device in 17 minutes. The handset runs on Android 12 with Xiaomi’s MIUI skin on top. The phone also features LiquidCool 3.0 technology that is made of two vapour chambers, which is 170 percent larger than the one in the Poco F3 GT.

The Poco F4 GT boasts symmetrical quad speakers with Hi-Res Audio and Dolby Atmos support. The phone has a CyberEngine ultra-wideband X-axis motor. It also comes with RGB light on the back and a side-mounted fingerprint reader. The Poco F4 GT has magnetic pop-up trigger buttons on the side for gaming.