According to Intel, the new Tiger Lake CPUs are “the world’s best processor for thin-and-light laptops.” Intel has announced nine new models in UP3 (Previously referred to as U-series) and UP4 (Previously referred to as Y-series) packages. The flagship Core i7-1185G7 offers a base clock speed of 3.0GHz and a boost clock speed of up to 4.8GHz as well as a maximum all-core boost speed of up to 4.3GHz.

Intel claims that the flagship Core i7-1185G7 can deliver a massive boost in performance of 100 percent as compared to the Core i7-1065G7U. The semiconductor manufacturer says that the flagship 11th Gen processor can handle 1080p gameplay without discrete graphics. Intel’s Iris Xe integrated graphics is the company’s most powerful yet, with 96 EUs and a maximum clock speed of 1.35GHz. 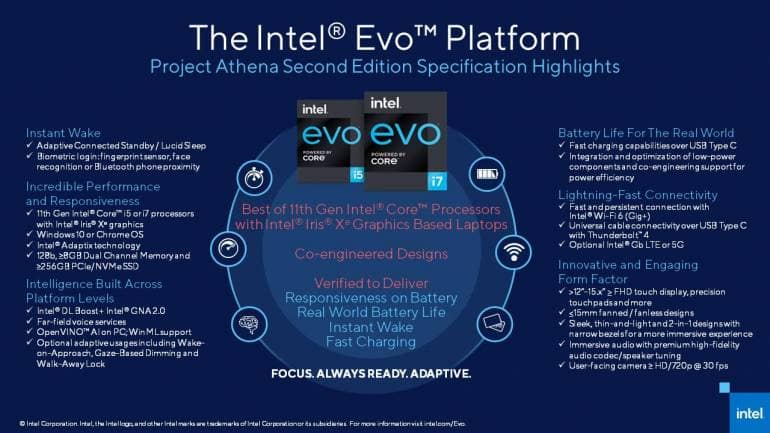 The company also announced Intel Evo, a new iteration of its Project Athena certification standard. Intel has identified several key experience indicators that a device must possess to feature the new Evo platform branding:Intel’s Evo logo will bring with it the guarantee of a quality machine, with the company confirming partnerships with several OEMs for 20 Evo-certified designs arriving by the end of the year.
Moneycontrol News
Tags: #Intel #laptops
first published: Sep 3, 2020 07:08 pm