Upcoming Event:Join us for the exciting discussion with Danone on role of nutrition, protein in working professionals’ quality of life on July 31, 3pm.
you are here: HomeNewsTechnology

There is nothing lite about the phone in terms of performance. We found it to be at-par with what Samsung offers with its flagship Galaxy S10.

With the smartphone market always abuzz with new launches and latest updates, the task is cut out for all the companies, especially those trying to gain a foothold in a new segment.

These phones seem to be the watered-down versions of the premium phones (S10/S10+ & Note 10/Note10+) launched last year.

So, will these Lite versions give you the premium phone feels?

Here's a lowdown on the features:

The Galaxy S10 Lite boasts of its big and crisp display. It has a 6.7-inch (which makes it largest of the S10 devices) Super AMOLED+ panel with a full-HD+(1080x2400) resolution and support for HDR10+. Colours are punchy and brightness is quite good.

The auto-brightness ensures that the display brightness adjusts seamlessly with changing ambient lighting.

The bezels all around the screen are pretty slim, including the chin below, which makes the front quite striking.

There's no glass at the back though with Samsung going for a laminated poly-carbonate finish.

However, it does smudge easily and attracts fingerprints. But overall, the body feels sturdy and well put-together with a metal frame.

With a thickness of only 8.1 mm, the phone looks quite sleek and it weighs just 187g.

The Infinity-O cutout on the front is a tad larger as compared to the A51 (review here), to accommodate the larger sensor of the selfie shooter but it doesn’t interfere with viewing video content as such.

The power and volume buttons sit on the right. There's a single speaker tucked away at the bottom next to the USB-C port, and the dual-SIM card tray is located on the left side. The hybrid tray lets you slot in two SIM cards or a nano-SIM with a microSD card.

The raised rectangular camera module on the back is big and makes the S10 Lite easily distinguished. Aesthetically, it may be a dampener.

There is nothing lite about the phone in terms of performance. We found it to be at-par with what Samsung offers with its flagship Galaxy S10. At the heart of the S10 Lite, we have 8GB of RAM next to an octa-core processor on Qualcomm’s Snapdragon 855 chipset, which is still one of Qualcomm's flagship chips and is still relevant even though it is now almost a year old. Some of you may want to compare the Snapdragon 855+ on the OnePlus 7T, but the real-life difference is barely noticeable.

I had no issues multitasking and jumping between multiple apps and when it comes to gaming, PUBG Mobile played fabulously.

The Galaxy S10 Lite holds a significantly bigger 4,500mAh battery than its siblings which can last you well over 1 day on a single charge and full usage of calls, texts, social media browsing and video streaming.

You can top up the phone from flat in just over an hour using the 25W charger in the box. The phone’s rear side does warm-up and the metal edges do heat up a bit. Temperature control is good if you are not gaming.

A triple rear camera setup with a 48 MP primary camera; a 12 MP ultra-wide sensor and a 5 MP macro lens. On the front, there is a 32 MP camera for selfies, which is slotted in the Infinity-O display. 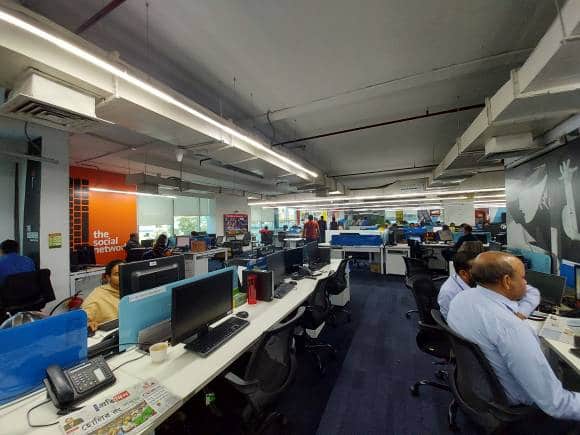 Not only do the daylight photos come out really good, there is a nightscape mode, which lights up a dark scene pretty well. You can see a visible difference while you are using the wide lens for clicking pictures as it accommodates more area post-selecting the mode.

All the sensors you'd typically expect are present and the phone has Widevine L1 DRM certification too. For selfies, there is noticeable skin smoothening, which works like a filter.

Video capture on the Galaxy S10 Lite is particularly good and the super steady OIS feature works very well and is a huge plus for all the vloggers out there.

At Rs 39,999, it is worth indulging in a phone which posseses a gorgeous display, excellent battery, Snapdragon 855 processor and decent cameras.

Users may, however, feel a little resistance with the absence of a 3.5 mm jack, an average fingerprint scanner or the camera module at the back.

Samsung's choice to go with a Qualcomm Snapdragon 855 here is the USP. A big positive for Samsung would be that cutting off corners hasn't resulted in the downgrading of the premium quotient of the device and the S10 Lite manages to look like a high-end device.