There was also a concept vehicle called Funster at the M&M pavilion, which is built as a convertible roadster

Pawan Goenka, MD, Mahindra & Mahindra, said, "We have 18 vehicles on display at the Auto Expo pavilion. These comprise passenger, electric and commercial vehicles. Shared mobility will drive adoption of EVs. We intend to offer the widest range of EVs and affordability is our guiding principle. The eKUV is a the ideal vehicle for shared mobility."

The eKUV is powered by a 15.9kWh motor that generates peak power of 40kW and 120nm of torque. The eKUV has a range of around 150 km and is targeted at the commercial buyer.

The vehicle, it claimed, can be fast charged to 80 percent in 55 minutes. The eKUV can be pre-cooled and remote started just like other modern day vehicles such as MG Hector and MG ZS.

M&M had unveiled the concept vehicle Atom during the 2018 Auto Expo. A production version of the vehicle was unveiled on February 5, which will go into production in the second half of 2020. The light weight, four-wheeled Atom is targeted at city mobility on commercial lines.

The auto major also unveiled the eXUV300, which is built on the XUV300 platform. The electric version of the SUV will be launched in the second half of 2021 and is meant for personal mobility. There was also a concept vehicle called Funster at the M&M pavilion, which is built as a convertible  roadster. The five-seater  EV developed by the company in-house has a top speed of 200 km per hour. 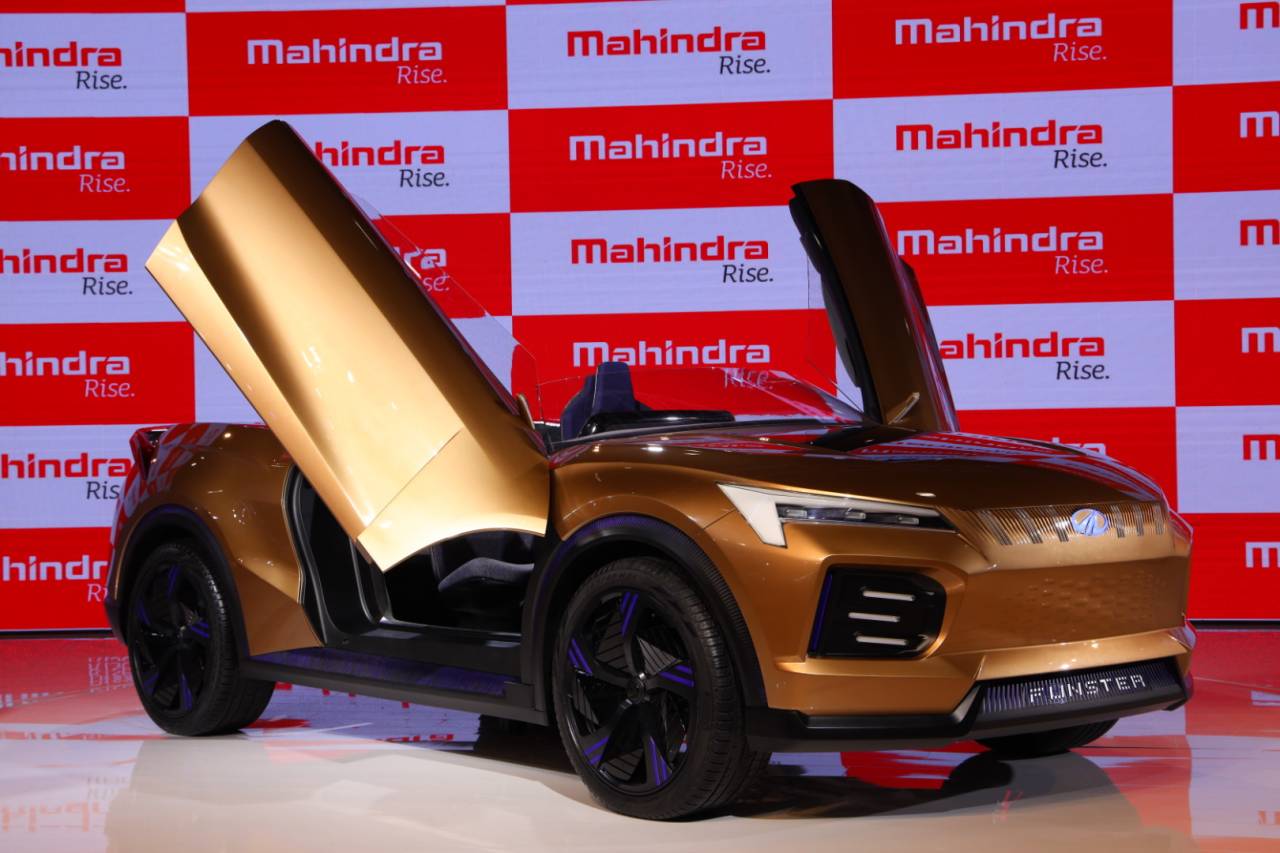 Apart from the concept car and three EVs, M&M also showcased two variants of the Treo: the Lithium-ion battery electric 3-wheeler. There was also a display of a first-of-its-kind future EV architecture MESMA 350 (Mahindra Electric Scalable Modular Architecture), electric batteries and charging station to drive a connected experience for the consumer.

The new Mahindra Treo three-wheeler features more than 20 new and improved EV components made in-house by Mahindra Electric. It also sports an additional range extender that will increase the Treo’s range by 60-70 km, along with a concept solar roof that further increase the range by 26 km.

Also on display was the Mahindra Treo Zor. This new model is apt for a range of applications from vegetable vendors to e-commerce players. With a best-in-segment storage area, the cargo box of the Treo Zor can be accessed from all three-sides, enhancing its usability and convenience.

M&M unveiled a new corporate brand identity with a new logo and tagline -- ‘Spark the New’-- at the end of January. The new identity is meant to give the brand a renewed thrust to achieve its global ambition of being a leading player in electric mobility technology solutions.

The launch of the new brand coincides with the completion of over 200 million electric km by a Mahindra EV on Indian roads. "The 200 million plus ekm done by Mahindra’s electric vehicles has helped save over 22,000 metric tonne of CO2 emissions in India. This translates to planting of over 10 lakh trees to absorb the equivalent levels of emissions," M&M said a statement.

The Mumbai-based company clocked a 14 percent year-on-year fall in domestic sales to 1.52 lakh during the April-December period, data supplied by the Society of Indian Automobile Manufacturers (SIAM) revealed.