Intel and Nvidia are combined to great effect on the Helios 300, at the cost of battery life.

Over the past couple of years, I’ve tested out several gaming laptops, ranging from entry-level to over-the-top. One overarching theme in the premium gaming laptop segment has always been ‘hefty price tags.’ However, one laptop attempts to break from this tradition. The Acer Predator Helios 300 is the cheapest premium notebook and might just be the fastest laptop under Rs 1,50,000. On paper, the Acer Predator Helios 300 is an absolute beast, but how does it fare in real-world scenarios, and what are you compromising for the price? Well, stick around and let us find out.

The Helios 300 follows the traditional Predator laptop design, which looks pretty cool. The black metal chassis paired with chrome accents, and the two reflective strips and predator logo on the lid, give this laptop a somewhat futuristic look. Additionally, the exhaust vents on the back look awesome, more like thrusters on a spaceship. The Helios 300 is relatively thin, not Zephyrus level thin, but relatively thin for a gaming laptop. It is certainly on the slightly heavier side, weighing 2.5 kg. The overall design is pretty solid, but there are a few caveats. First off, this Helios 300 is a smudge magnet, the chassis and lid easily attract smudges, and you can even notice them in the pic. Secondly, the chrome accent on the front of the keyboard deck doesn’t just look sharp but is literally sharp, which can be quite uncomfortable during a long gaming session. These are more of minor annoyances rather than dealbreakers.

In terms of ports, Acer has configured the Predator Helios 300 with two USB-A ports, a headphone and an Ethernet port on the left side, while a USB-C port, a USB-A port, an HDMI port and a mini-DisplayPort sit on the right flank. The power port is the only one on the back of the machine. Overall, you have plenty of ports to connect all your accessories. Personally, I’d prefer to have the ports on the back of the laptop rather than the right side as the wires tend to come in the way when using a mouse. 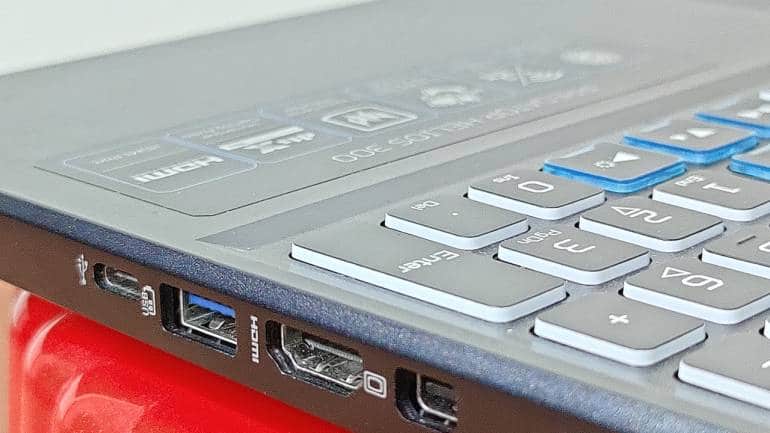 The Predator Helios 300 features a full chiclet-style keyboard with 4-zone RGB lighting. The keys have a decent travel distance, but more importantly, the keys are well-spaced out and don’t feel mushed. I found the keyboard very comfortable for gaming and typing. The hotkeys and WASD keys have a concave shape, which makes them stick out. The trackpad is smooth to the touch while Windows 10 gestures were very precise. Additionally, the highlights surrounding the trackpad also add a bit of visual flare. The buttons on the trackpad are pretty solid. The trackpad is nothing out of the ordinary, although I preferred hooking up a mouse the entire time. Overall, the trackpad is just about average here, but the keyboard is undoubtedly one of the most comfortable I’ve used on a laptop.

Acer has retrofitted the Predator Helios with a 15.6-inch Full HD (1080p) IPS panel. The screen is super-smooth with its 240Hz refresh rate and a 3ms response time. The display can achieve around about 280 nits of brightness, which is just about average. I wouldn’t recommend this panel for content creation or any work where colour accuracy is of the utmost priority. But I didn’t have a single complain while gaming. And considering this is a gaming laptop, I’d give the screen a solid A. 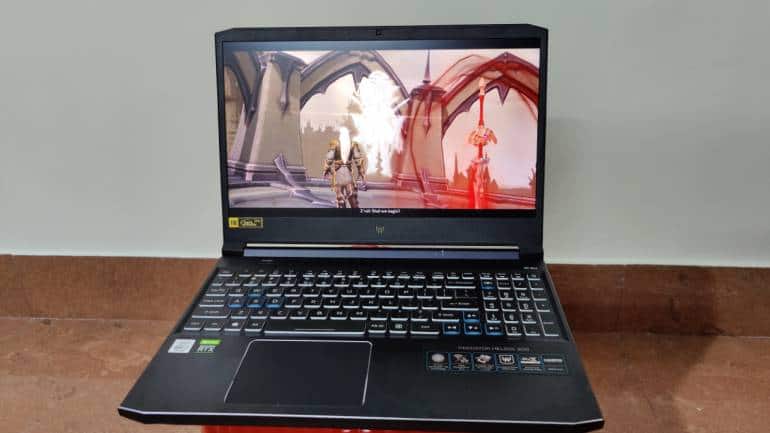 For performance, the Predator Helios 300 is equipped with an Intel Core i7- i7-10750H processor paired with an Nvidia RTX 2070 Max-Q graphics card. The laptop also had 16GB of RAM coupled with a 256GB PCIe SSD and a 1TB HDD. Before we elaborate on real-world performance, it is worth noting that RAM can be expanded to 32GB, while the laptop also has slots for two SSDs and an HDD, which is perfect for upgradability down the road. Moving on to gaming performance. 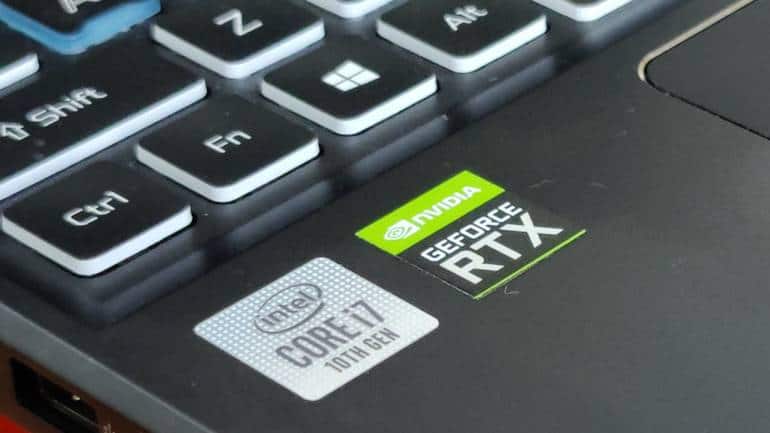 The first game we tested on the Helios 300 was Battlefield V which averaged at around 85 fps on Ultra settings without DLSS and ray tracing. Far Cry 5 on Ultra settings managed to surpass the 100fps mark but averaged at around 95 fps. GTA V on Very High settings delivered 78 fps on average. The last AAA game we tested was Call of Duty: Modern Warfare, which managed to deliver 88 fps on average with all settings maxed out.

In terms of multiplayer titles, we tested three first-person shooters. First off was Apex Legends, which delivered 105 fps on average with the settings maxed out. Fortnite on Epic settings averaged at 125fps. DOTA 2 on Ultra consistently surpassed the 150fps mark. Playing Overwatch on High settings yielded 140fps on average. Lastly, CS: GO was the only title that crossed the 240fps mark, hitting 270fps on average on High settings. And that’s a wrap for gaming. The Predator Helios 300 uses the 4th Gen AeroBlade 3D fan and Acer CoolBoost technology. Additionally, there are vents on the back and sides to help with cooling. The improved cooling system ensures that the laptop stays pretty cool under pressure. The heat coming out from the vents wasn’t a bother, while the keyboard deck doesn’t get warm after long hours of gaming. You can also set the fan speeds or overclock the GPU in the Predator Sense app, which can be opened through a push of a button on the number pad. There’s a Turbo button right above the keyboard that can be used to automatically select the Extreme overclocking feature and max out the fans. However, the one side effect of this is considerably loud fans; we’re talking, completely drowning out the speaker volume loud.

In terms of CPU performance in benchmarking, the six-core Intel chip is still behind AMD’s new Ryzen 4000 H series processors. However, Intel still leads the way in gaming performance. When it comes to Ryzen 4000 laptops, I’ve only tested the Asus ROG Zephyrus G14, which fits an 8-core CPU and an RTX 2060 Max-Q in a very-small chassis. But even then, the Helios 300 is well ahead. As things stand, Intel still seems like the best option for raw gaming performance.

Battery life is the one area where gaming laptops tend to struggle, and this was no different for the Helios 300. However, the Predator Helios 300 barely manages to deliver three hours of battery life on a full charge, way below the category. I have seen a few laptops with lower battery life, but four hours is the bare minimum. I wouldn’t recommend gaming or work on this laptop without an outlet close at hand. The Acer Predator Helios 300 combines the Intel and Nvidia hardware to great effect. Although it is specced out to be a premium laptop; at Rs 1,39,999, the Helios leans closer to the mid-range. In terms of performance, I don’t think there is a laptop in this price range that can compete with the Helios 300. The closest I found was an Asus ROG Strix model for Rs 1,60,000; everything else was closer to the two-lakh mark.

There are a few noticeable caveats on the Helios 300, but at this price and with these specs, it is hard to complain. The Intel CPU runs pretty cool under pressure, the overall design definitely doesn’t leave a lot to be desired, and the keyboard is pretty comfortable. Apart from the sub-par battery and extremely loud fans, I thought the Predator Helios 300 hit all the right boxes. If I had to sum it up in one sentence, I’d say that “the Acer Predator Helios 300 is a good laptop for enthusiast gamers at a mid-range price”.